U solar car to race across the country

The Solar Vehicle Project team will drive 1,100 miles from Tulsa to Chicago, making numerous stops along the way. 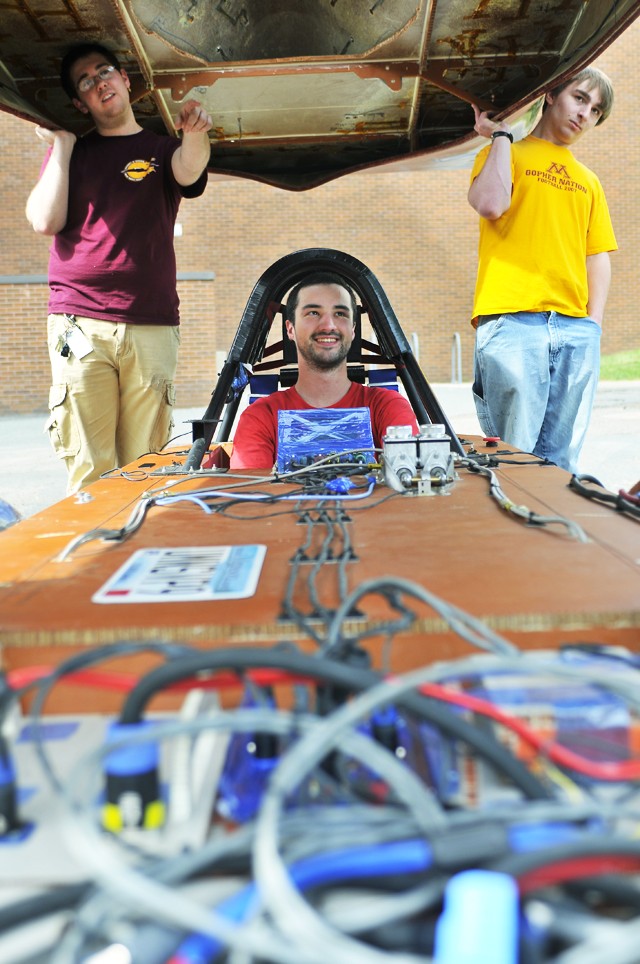 As a tractor coasted 30 feet from his car in the parking lot, Alan Jacobs fell silent, watching and waiting for something to go wrong âÄî for some damage to happen. The sound of the tractor faded. He relaxed and admitted his fear may have been irrational. To be fair, his car is anything but normal. Its sleek, three-wheel design is the product of $100,000 and more than 50,000 man hours, and heat rises off its jet-black solar panels in the hot sun. ItâÄôs called Centaurus II, and itâÄôs the progeny of the University of Minnesota Solar Vehicle Project, whose members treat their car like proud but anxious parents. After two years of steady work, the team will take its car south for the North American Solar Challenge, a 1,100-mile race from Tulsa, Okla., to Chicago. But the race could end up being the teamâÄôs final one. Facing decreased funding from national groups and the University, Centaurus II âÄî SVPâÄôs ninth car âÄî might also be their last. Twelve other SVP team members will join four rotating drivers as they hit the highways, competing against 15 other teams from colleges across the nation. Although the seven-day race wonâÄôt start until June 20, they leave early Thursday morning to make it in time for an intense inspection that will begin Saturday in Cresson, Texas. On June 16, the team will compete in the Formula Sun Grand Prix, a three-day track race and qualifier for NASC. If all goes well during qualifying, the team will start the cross-country race two days later. âÄúThatâÄôs the big test,âÄù said Jacobs, a material sciences senior and SVP project manager. Nine days before departing, a handful of team members sat in their garage. Nervousness mixed with confidence as they joked with one another while handling thousands of dollars worth of equipment. âÄúWeâÄôre all partially freaking out, partially hoping to get everything polished off before we head out,âÄù Jacobs said. Despite their concerns, Jacobs and the rest of the team have a reason to be confident: a history of success. Since SVP was founded in 1990, it has won the Formula Sun Grand Prix three times, placed second in NASC twice and found itself in the top ten of almost every race it competed in, including two in Taiwan and Australia. The car itself is a product of very clear evolution. The difference between Centaurus II âÄî SVPâÄôs ninth car âÄî and its first car is stark. The team works in two-year cycles. It spends the first year disassembling and analyzing the car from the year prior to learn how to improve the next year, during which its designs and builds a brand new car. The design of this yearâÄôs car began in December 2008 and was finalized last summer. The team built the shell this past winter, and painted it by February. Maroon and gold paint peaks out beneath the array of solar panels that dominate the body of the car. Those solar panels collect energy and send it down wires through the body of the car to the battery, which powers the motor. Aside from the solar panels and the absence of a gas tank or drivetrain, Jacobs insists this car drives like any other. With normal steering, suspension and brakes, itâÄôs capable of speeds up to 80 miles per hour. The carâÄôs unique design still turns heads, as the team found out after being pulled over four times while driving to Rhinelander, Wis. on Memorial Day weekend for testing. âÄúThere were plenty of people with their cell phones out to take pictures, thatâÄôs for sure,âÄù added Adem Rudin, a five-year team veteran and recent aerospace engineering graduate. In addition to his role as a regular team member, Rudin handles all the logistics for the race, including schedules and lodging. With travel and fees, competing in the race costs the team about $30,000. The final race? The projectâÄôs high price tag has lead to doubt of whether it will continue next year. The Institute of Technology will no longer fund SVP, said Mostafa Kaveh, associate dean for research and planning. Kaveh said there has been a drop in nationwide interest in solar vehicles, forcing SVP to rely more on normal collegiate funding. The U.S. Department of Energy withdrew its sponsorship of NASC in 2005, shifting its resources to the Solar Decathlon. The Solar Decathlon is a competition that challenges collegiate teams to build solar-powered houses. âÄúItâÄôs very shaky on the national level,âÄù Kaveh said. The decreasing interest in solar vehicles may be due to their unclear future. Without several leaps in technology, a purely solar vehicle could never become an everyday consumer car, Jacobs said. But for Jacobs, Rudin and the rest of the team, the value of SVP lies in education, not money or practicality. âÄúItâÄôs been really rewarding,âÄù Rudin said. âÄúIâÄôve learned a lot âÄî a lot that you never learn in class.âÄù SVP has been relying more on private funding and donations from companies like 3M, Jacobs said. Though the future of the project may be in doubt, he is confident they can find a way to continue without the same financial help from the University. As the team members prepare to leave, all they can do is focus on the race ahead and hope everything works out. âÄúWe put a lot of time into this and we all enjoy it,âÄù Jacobs said. âÄúSometimes weâÄôre cursing at it, but I wouldnâÄôt give it up for the world.âÄù