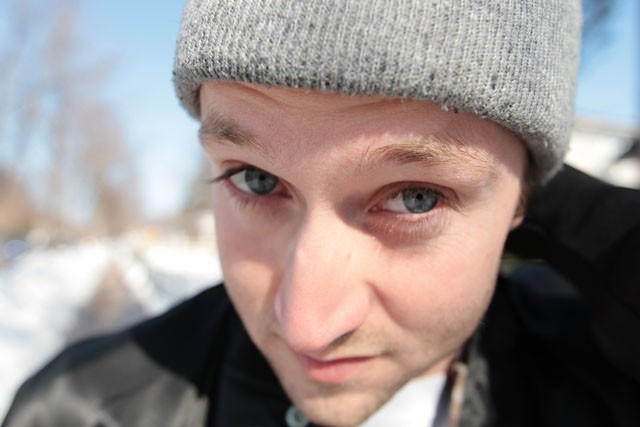 Sims of Doomtree will drop a new album during a CD release show Saturday, Feb. 19 at the Fine Line Music Cafe.

ItâÄôs not uncommon to see Andrew Sims tearing it up on the stage with local hip-hop collective Doomtree, but this Saturday, the sharp emcee will own the spotlight solo as he drops his second LP, âÄúBad Time Zoo.âÄù

For Sims, the project has been a long time coming. Mainly collaborating with beat-master and fellow Doomtree member Aaron Mader, a.k.a. Lazerbeak, over the past two years the pair synthesized a collection of nearly 35 tracks into one furious, foot-stomping record.

âÄú[LazerbeakâÄôs] beats are definitely the most unique,âÄù Sims said. âÄúI like his aggressive beats. They make me think, âÄòYeah, this is what rap sounded like, except itâÄôs the future now.âÄô âÄù

The future, as a product of Sims and Lazerbeak, sounds pretty damn extraordinary. âÄúBad Time ZooâÄù is chock full of LazerbeakâÄôs multifarious, turbulent production, but SimsâÄô fine-tuned rhymes balance everything out, preventing the overall sound from feeling too overburdened with anger and also forcing the listener down a surprisingly introspective path. Sims is a little bit older and wiser, and his open-for-interpretation reflections are absorbing.

To tackle this subject matter, Sims confronts everything from acknowledging oneâÄôs home to a humorous mockery of modern day âÄúphilanthropyâÄù (e.g. shopping at a co-op or driving a hybrid car).

Though thereâÄôs a clear note of seriousness behind his social commentary, itâÄôs cushioned with humor and refreshing self-awareness. Even Sims is a firm believer that his own material doesnâÄôt need to be taken completely literally.

âÄúItâÄôs about reconciling the fact that no, none of this is the truth, itâÄôs all just my opinion on the way that this is,âÄù Sims said. âÄúI am just a guy in the world, but everyone is just a guy or girl in the world, and no one knows what the hell is going on.âÄù

While such meditations could lead to varying philosophical interpretations of âÄúBad Time Zoo,âÄù one thing that surely binds people back together is SimsâÄô undying love for pop culture. Whether heâÄôs referencing a graphic novel or a grocery store, his carefully placed tidbits of modern and local cultural products establish his music as relatable to a wide audience.

While the release of âÄúBad Time ZooâÄù is destined to be well received in the Twin Cities and will keep the talented rhymer on the road for the better part of the year, Sims is no lone wolf.

âÄúDoomtree is my family,âÄù he said. âÄúWeâÄôve been doing this for nine years now, and weâÄôre getting better at it. WeâÄôve made a successful business. Everyone in Doomtree is staying in Doomtree for a long time.âÄù