More students are reporting using marijuana, according to a new student health report from Boynton Health. 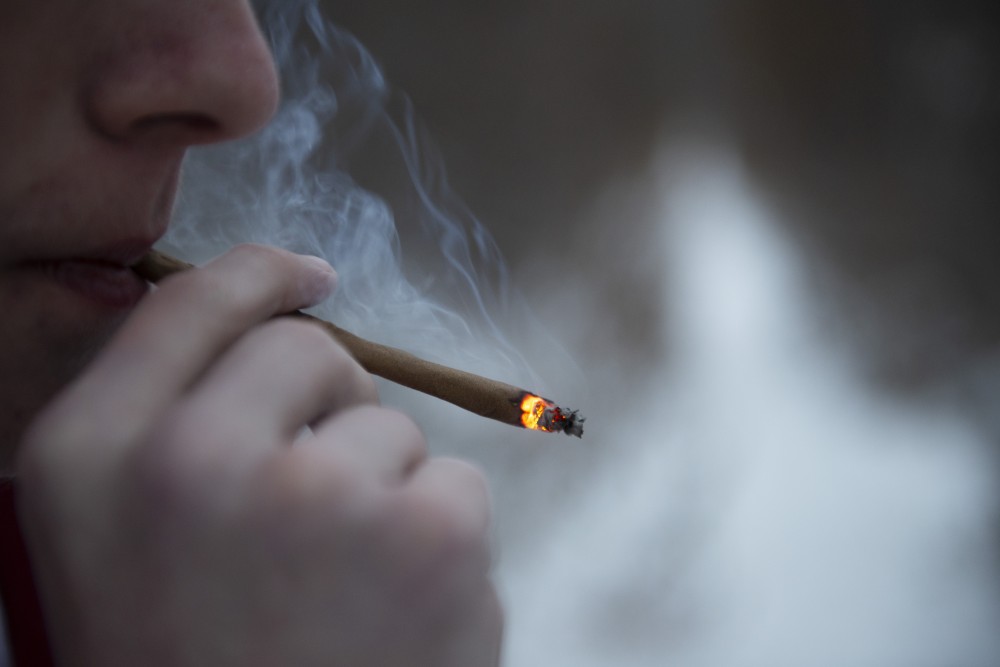 A university freshman smokes a marijuana blunt on the Mississippi River's west bank on Friday, Nov. 30. The student has been smoking since his senior year in high school and doesn't plan to stop, mentioning that it doesn't inhibit his studies at all.

Around 11 p.m. once a week, a freshman heads outside to a spot near his residence hall to smoke marijuana out of a bong he’s named “Bentley.” He smokes outside to avoid getting caught by his community advisor.

This student, who is not being named because the drug is illegal and he fears repercussions, said he smokes marijuana about once a week. He belongs to a growing trend of students using marijuana on the University of Minnesota campus.

Reported student marijuana use at the University is at the highest it’s been in the past 20 years, according to a Boynton Health survey released this month. Twenty-two percent of students reported using marijuana within the past month, a 5 percent increase since 2015. The Boynton Health survey, which is sent out every three years, looks at student health-related behaviors, including drug use.

Accounting for the increase, Golden said he speculated it resulted from a changing social environment surrounding marijuana. “I’m now aware that more states are legalizing [marijuana],” Golden said. “That’s a big change in the country, and that affects how people interact with the drug.”

Individual states are legalizing the drug recreationally and medicinally, despite the drug being illegal on the federal level. On November 7, Michigan became the 10th state in the U.S. to approve recreational marijuana use. Just to the north of Minnesota, marijuana became legally available for recreational use in Canada in October.

As more University students are reporting marijuana usage, Minnesota’s governor-elect is also pushing for the legalization of the drug in the state.

“I support legalizing marijuana for adult recreational use by developing a system of taxation,” governor-elect Tim Walz tweeted in August. In the tweet, he also said he supports a system where marijuana is grown locally, and expunging the records of Minnesotans convicted of crimes involving marijuana.

The anonymous freshman interviewed for this story said he started smoking in high school with his friends. They usually smoked before football games. Now in college, he smokes about once a week, and said it doesn’t affect his grades and school work.

“I don’t smoke before classes or before doing homework. I smoked all year during my senior year in high school, and it didn’t affect my grades,” he said.

“There’s an association with marijuana use and [a] lower GPA,” Golden said. “There’s also been some studies out there that point to learning difficulties. … When you start [smoking] younger, it seems to impact people more over time.”

Golden said he thinks the survey was accurate because the sample size was large and students tend to answer honestly.

“[Twenty-two percent] seems a little low,” said an anonymous junior who smokes frequently. “I see smoking as something that a lot of people do, … or something that people do once a month,” he said.

The junior interviewed said he believes marijuana usage is a college student fad. “It’s absolutely something that people think is cool to do. Most people will smoke during college and then decide it’s not for them,” he said.