Minnesota beat the Mavericks 4-1 in the first and took the shootout in the second. 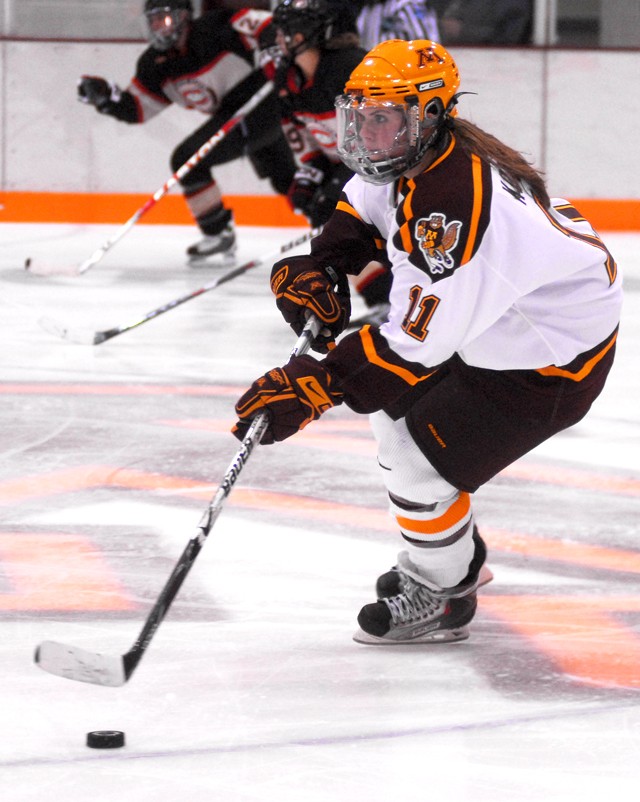 The No. 3 Minnesota womenâÄôs hockey team returned from a bye week well-rested this weekend, beating Minnesota State-Mankato on Friday 4-1 and tying SaturdayâÄôs game 1-1, but taking the shootout victory. SaturdayâÄôs game will count as a tie overall, putting the Gophers at 9-2-1 overall and 7-2-1 in the Western Collegiate Hockey Association. Minnesota State-Mankato fell to 3-4-3 and 1-4-3 in WCHA play . The two teams were deadlocked at 0-0 until 12 minutes into the second period of FridayâÄôs game when Minnesota let loose on the Mavericks, scoring three goals in the last half of the period. Senior Kelli Blankenship broke up the tie with assists from junior Emily West and senior captain Brittany Francis. With the assist, Francis became the 16th Gopher in history to reach the 100-point mark for a career and the first since Gigi Marvin in 2007-08 . âÄúSince the first day she walked in the door, sheâÄôs been a very steady presence for us,âÄù Minnesota head coach Brad Frost said. âÄúSheâÄôs right up there with some of the best weâÄôve had.âÄù Sophomore Anne Schleper added another goal on the GophersâÄô fifth power play of the night. Junior Emily West then scored two minutes later to give Minnesota a 3-0 lead. The Mavericks cut the lead to two on sophomore Emmi LeinonenâÄôs power-play goal. But the Gophers put away the Mavericks with solid defense and a power-play goal by sophomore Sarah Erickson, her 11th in as many games this year. Freshman goalie Noora RÃ¤ty finished with 29 saves . Saturday afternoon saw a very different game, one that could not be decided in regulation. The Gophers could not stay out of the penalty box early in the game, giving Mankato eight minutes worth of power plays in the first period. âÄúWe were pretty undisciplined in the first with all those penalties,âÄù Frost said. âÄúWe told the team âÄòItâÄôs going to be really hard to win if weâÄôre in the box eight to 10 minutes of each period.âÄô âÄù The Gophers found themselves in an unfamiliar situation when Nina Tikkinen put the Mavericks on the board five minutes into the game, only the second time the Gophers had not scored first all year. Minnesota kept up the attack and continued to outshoot the Mavericks, but the Gophers were unable to get past the strong play of MankatoâÄôs goalie, Alli Altmann , early in the game. That changed when Schleper scored her sixth goal of the year to tie the game halfway through the final period. The game went into overtime, but proved not to be enough for both teams, as Mankato tallied the only shot on goal in the period. In the shootout, Erickson, West and Francis were denied but were backed up by RÃ¤tyâÄôs strong play between the pipes. Schleper then finished what she started by putting the puck in the back of the net. RÃ¤ty made a great save from her side to give the Gophers a victory in the shootout. âÄúIt was a different situation for us and I think it definitely showed some character for us,âÄù Schleper said. Frost said he was impressed by how hard his team competed despite the early penalties. âÄúI thought our team stayed with it and stayed positive and âÄ¦ it finally paid off,âÄù Frost said. The Gophers will host Bemidji State at Ridder Arena next weekend. FridayâÄôs game is set for 6:07 p.m., while SaturdayâÄôs will begin at 4:07 p.m.