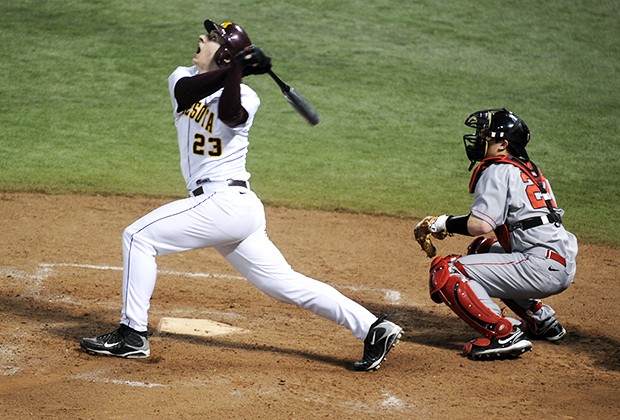 A seemingly unlikely team is becoming quite a thorn in MinnesotaâÄôs side this year. Wednesday night at the Metrodome, the No. 25 Gophers suffered their second loss of the season to Northern Iowa, a team that typically lands in the middle of the Missouri Valley Conference, 9-7. Logic would suggest a Big Ten team would have the decided upper hand against a MVC opponent, but as Minnesota has learned from perennially tight meetings with the Panthers, thatâÄôs not always the case. âÄúThatâÄôs baseball,âÄù head coach John Anderson said. âÄúI donâÄôt think you can look at one game and make certain comparisons between teams and leagues. Obviously, weâÄôve had two competitive games against them.âÄù The other was a 4-3 loss just less than a month ago. In both games, the Gophers have struggled with timely hitting. They left 15 runners on base Wednesday night. Still, Minnesota managed seven runs on 14 hits. It was the defense in the disastrous sixth inning that changed the face of the game. The Panthers struck first in the top of the third, but Minnesota answered quickly in the bottom of the inning. Two runners crossed the plate and starter Chris Macek was pulled before the Panthers recorded an out. Junior outfielder Eric Decker’s blistering speed added one more when he legged out an infield single with two outs and the bases loaded. Scott Fern found himself in a jam early in his single inning of work, as struggled to find the plate when he entered the game in the top of the fourth. He walked the first two batters he faced, but a precise throw by catcher Kyle Knudson caught Levi Ferguson stealing and a textbook 4-6-3 double play ended the inning. The Gophers, meanwhile, continued to add to their lead. Senior Matt Nohelty flashed some speed of his own in the bottom of the inning with a stand-up RBI triple off the wall in center, then scored easily on a Derek McCallum groundout to third. McCallum now has an RBI in seven straight games and, perhaps more impressively, multiple RBIs in six-straight. Then came the top of the sixth, an inning Minnesota would rather forget. Northern Iowa exploded for six runs on six hits and two Gophers errors, worked through two Minnesota relievers and emerged with a 7-6 lead. âÄúWe broke down on defense and gave up a big inning,âÄù Anderson said. âÄúWe had a 6-1 lead, we had an opportunity to turn a double play and minimize that inning. After we didnâÄôt turn the double play you saw the momentum shift.âÄù Again the Gophers answered in the bottom of the inning to knot the score, but in the top of the eighth, the Panthers scored two off of reliever Scott Matyas to move ahead 9-7. And finally, Minnesota had no answer.