Both the men's and women's teams have won every meet they have participated in so far. 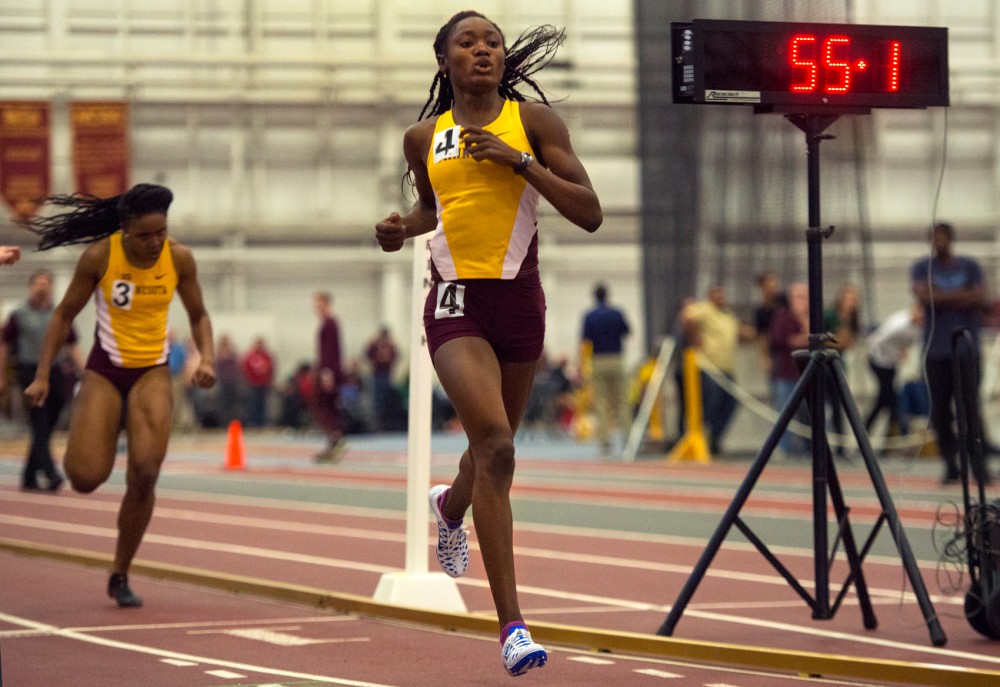 Junior Titania Markland crosses the finish line, placing first in the 400-meter dash during the Jack Johnson Classic at the Field House on January 30.

The Minnesota men’s and women’s track and field teams are confident in their abilities as they kick off their season.

The women’s team is young this year with 39 of its athletes either true freshmen or redshirt freshmen and only 10 seniors or redshirt seniors.

Redshirt senior Kat Keller said the change in the age dynamic of the team has been interesting in a good way.

“We’re a young team, so you can kind of tell that,” Keller said. “It’s fun to watch the young kids get experience and learn from what the older kids are doing. We’re not used to having a young team, but it’s fun.”

Despite the loss of some seniors from last season and a few athletes red-shirting because of various injuries, the team still remains strong, redshirt senior thrower Angie Guenther said.

Guenther said the freshmen have been good additions to the team and have been adjusting well to collegiate athletics.

“We’re a different team than last year,” Guenther said. “I think [the goal is to] push ourselves individually and then the performance will come from that. What we really want is to be a family and build those relationships and our performances will follow it.”

Guenther said she is excited for her final season with the Gophers and likes the energy the team has this season.

“We figured out that something that’s good for our group is just to kind of be free and be ourselves. You focus when it’s time to focus, but in competition don’t get too into your own head,” Guenther said. “Just focus on being in the moment and enjoying the time there, and results follow that.”

The Gophers started their season off right on Jan. 14 when they hosted the Minnesota Open at the University of Minnesota Fieldhouse.

The teams kept the momentum going while competing against Wisconsin in Madison on Jan. 21, and both teams beat the Badgers squads.

The men took home first-place wins in nine out of the 15 events while the women won eight events in a slim two-point victory.

“Both [meets] were very good in general,” Keller said. “The Minnesota Open is always kind of our wake up meet. With the dual we always want to beat Wisconsin, but that went as planned. We planned on winning.”

The Gophers will host the Jack Johnson Classic at the Minnesota Fieldhouse on Friday and Saturday.

The meet is held in memory of Jack Johnson, who served as the equipment manager for Minnesota for over 30 years.

“I think what we’re looking at [for goals] for indoor is just getting experience because we are so young,” Keller said, “That’s a big thing when it comes to running track.”