Minnesota allowed only two runs in three games against Northwestern. 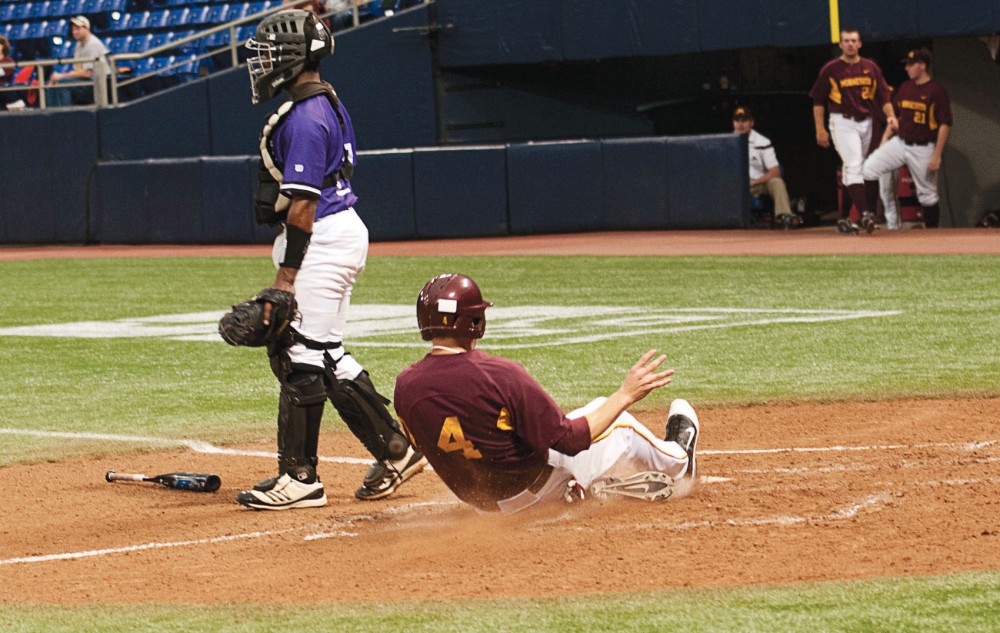 Gophers third baseman Kyle Geason slides home during Sunday's game against Northwestern University at the Metrodome. Geason was 1-for-4 with an RBI in his return from a wrist injury.

When the Gophers lost April 6 against Ohio State, an eight-game winning streak ended and a four-game losing streak began.

Lucky for Minnesota, last-place Northwestern came to town at just the right time.

Gophers pitchers were dominant in holding the Wildcats (10-22) to just two runs all weekend en route to a three-game sweep.

Minnesota (20-17) is second in the Big Ten behind Purdue with a 6-3 conference record.

“The reason we won the series is because of the way we pitched and played defense,” Gophers head coach John Anderson said.

Minnesota also welcomed Kyle Geason back into the lineup Sunday. The senior third baseman missed the last seven weeks with a wrist injury.

The Gophers scored two runs in the first inning Friday, and that was all the support starting pitcher TJ Oakes needed.

The 6-foot-5 right-hander struck out seven batters, didn’t walk any and allowed one run in 8.1 innings.

“Top pitchers can stop losing streaks,” Anderson said. “TJ was the right guy to have out there.”

But he did run into a little trouble in the ninth inning as he was vying for a complete game.

With Minnesota leading 2-1, Wildcats designated hitter Jack Livingston led off the inning by scorching Oakes’ offering into the left-center field gap for a double. A sacrifice bunt moved him to third, and suddenly the game-tying run was 90 feet away.

Oakes got yanked and in came reliever Kevin Kray, who struck out the next two batters to clinch a 2-1 win and his sixth save of the season.

“I’m not a strikeout guy. I was willing to let them put in play,” Kray said. “I just wanted to put the ball over the plate, and I was fortunate that I hit my spots and made them miss.”

Oakes improved to 6-2 on the season. Gophers left fielder Andy Henkemeyer was 3-for-3 with an RBI and scored a run.

Offense was at a premium on Saturday.

Minnesota starter DJ Snelten and Northwestern starter Brandon Magallones were both on top of their game.

Both pitchers cruised through seven innings, neither allowing a run, before Northwestern had a small breakthrough in the eighth inning.

A one-out single followed by back-to-back walks loaded the bases, and Paul Snieder put the Wildcats up 1-0 with a sacrifice fly.

That was the only run Snelten allowed in 7.2 innings before he was pulled in favor of Billy Soule.

Northwestern’s 1-0 lead held until the bottom of the ninth inning when Minnesota’s bats finally came to life.

Center fielder Jake Bergren led off the inning with a drag bunt single. Henkemeyer bunted him over to second and Dan Olinger tied the game with an RBI-single.

Schlangen battled back from an 0-2 count and smacked a walk-off single into right field.

“I went up there looking [for a] fastball. … First pitch painted the outside corner, good pitch. Then he came with the curveball right away,” he said.

“I was looking for the curveball and reacting to the fastball. That helped me stay back and hit the ball into right field.”

Minnesota scored three runs in the second and fourth innings. Austin Lubinsky threw seven scoreless innings to pick up the win, and the Gophers cruised to the sweep.

Bergren and Halloran were both 2-for-4 with an RBI.

Geason made his first start since Feb. 24 and was 1-for-4 with the game’s first RBI and his first of the season.

“It felt great. Missing a lot of time … gave me an edge to come back out, get healthy and play again,” Geason said.

Minnesota will play two midweek games with Nebraska-Omaha before traveling to East Lansing, Mich., this weekend for a three-game set with Michigan State.

Shortstop Michael Handel is day-to-day with a shoulder injury. Anderson said he’s scheduled to have X-rays tomorrow. Second baseman Matt Puhl slid over to shortstop Saturday and Sunday while Tony Skjefte held down second base.