Minnesota will host Bemidji State in a rematch of last weekend’s series. 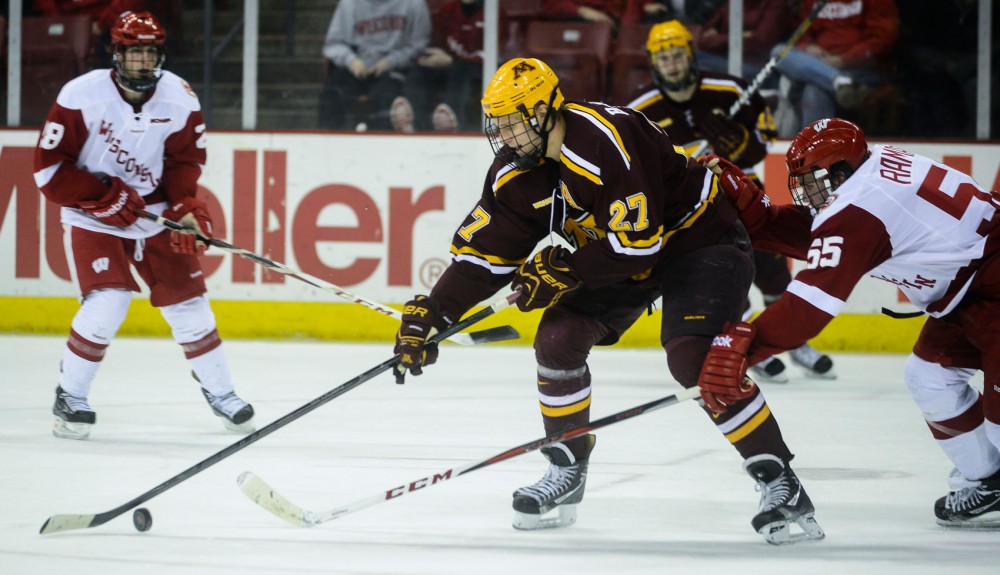 The No. 2 Gophers will play the same opponent this weekend with a little more on the line.

Minnesota (24-7-5, 16-7-5 WCHA) and Bemidji State will face off for the second consecutive weekend, with the winner of the three-game series advancing to the WCHA Final Five.

Minnesota won a share of the Western Collegiate Hockey Association’s MacNaughton Cup last weekend by sweeping the Beavers at the Sanford Center in Bemidji, Minn.

“It was one of those things that we set out to do before the year started,” junior defenseman Nate Schmidt said of the cup. “We thought that if we gave ourselves a chance, hopefully some chips fall our way, and they did.”

Tying St. Cloud State atop the league standings means the Gophers achieved their preseason goal of winning some WCHA hardware in their final season in the conference.

An appearance in the Final Five would give them another opportunity.

“It has its pros and cons,” sophomore defenseman Ben Marshall said of playing Bemidji again. “We know what Bemidji’s about, they know what we’re about. I think we understand how we need to play against them.”

Schmidt said the playoffs offer a different kind of hockey compared than the regular season.

Minnesota hasn’t won the WCHA tournament since the 2006-07 season. North Dakota has claimed the last three.

Head coach Don Lucia said drawing Bemidji State (5-16-7 WCHA) in the opening round doesn’t mean the Gophers will end up in St. Paul next weekend.

“You talk to the coaches around the league, and there’s nobody you want to play,” Lucia said. “There’s certainly more parity in college hockey than ever before. … It’s always hard to end somebody’s season.”

Playing at Mariucci Arena, which has a larger, Olympic-sized ice surface than the Sanford Center’s smaller, NHL-sized surface, could benefit the Gophers, who have more speed than Bemidji State.

North Dakota beat Minnesota 6-3 at the Xcel Energy Center in last season’s tournament after trailing 3-0. Minnesota blew a two-goal, third-period lead and gave up five goals in the last 20 minutes.

The Gophers got revenge against North Dakota in the NCAA regional at the Xcel Energy Center two weeks later. But Schmidt said the Gophers have unfinished business in the WCHA playoffs.

“It kind of leaves a little sour taste in our mouth,” Schmidt said of the loss last year to North Dakota.

The Gophers ended the regular season on a three-game winning streak after playing roughly .500 hockey for several weeks, including a 2-0 home loss to Denver.

“[Inconsistency] can’t be a problem anymore,” Schmidt said. “If that happens, obviously, we may not be playing anymore.”