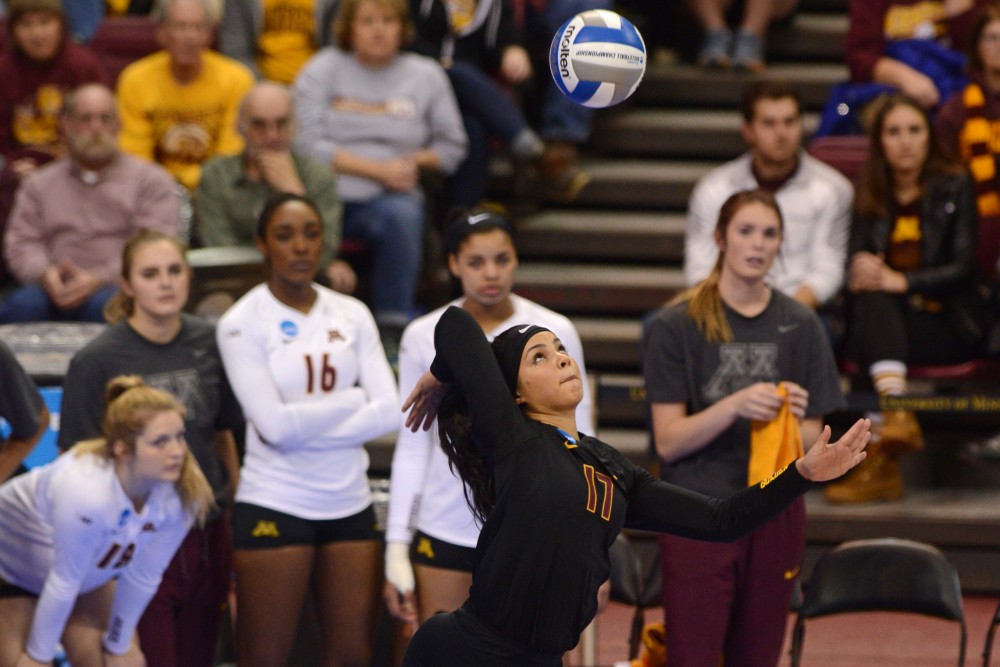 Senior libero Dalianliz Rosado readies to hit the ball during a match against the Bruins at Maturi Pavilion on Dec. 10, 2016.

The Gophers came into the NCAA tournament with a lower seed than it had in season’s past — seventh in the bracket compared to the two seed the past two years.

The Gophers were looking to make it to their third consecutive Final Four over the weekend, but USC proved on Friday that a different kind of Minnesota team does not lead to postseason success.

“I would like to congratulate USC on a great performance tonight,” Gophers’ head coach Hugh McCutcheon told reporters. “I certainly wish them well as they advance in the tournament. We are disappointed not to be playing tomorrow, but sometimes it happens. It is an occupational hazard, sometimes you win and sometimes you don’t.”

A reason for Minnesota’s defeat was the amount of service errors they made. The Gophers had four on the night compared to USC’s one. Also, USC bested the Gophers in kills, 54-43.

The Trojans needed more than 25 points to beat the Gophers in the second set. USC led 24-22, but Minnesota tied the set at 24, which led to the Trojans calling a timeout. The Gophers and Trojans exchanged points until USC pulled away to take the set 28-25. The Trojans followed that up with a 25-16 victory in the third and final set.

Seniors Molly Lohman and Dalianliz Rosado performed well in their final match as Gophers. Lohman had six kills and six block assists, while Rosado continued her strong defense with 17 digs.

“Obviously, it has been an amazing journey,” Lohman told reporters. “I can’t really put it into words.”

Minnesota ends its season with a 28-6 record. The Gophers finished the nonconference slate undefeated, but the team’s 15-5 conference record is the worst they have finished in the Big Ten since the 2014-15 season. Alexis Hart, Stephanie Samedy and Samantha Seliger-Swenson earned All-Big Ten accolades for the season. They will all return to the team next season.

McCutcheon was disappointed with the loss, but proud of his team’s performance this season.

“We are very proud of our team for our body of work,” McCutcheon told reporters. “Really proud of our team, but obviously still upset with the result. We’ll get some lessons learned and come back next year and have another crack at it.”