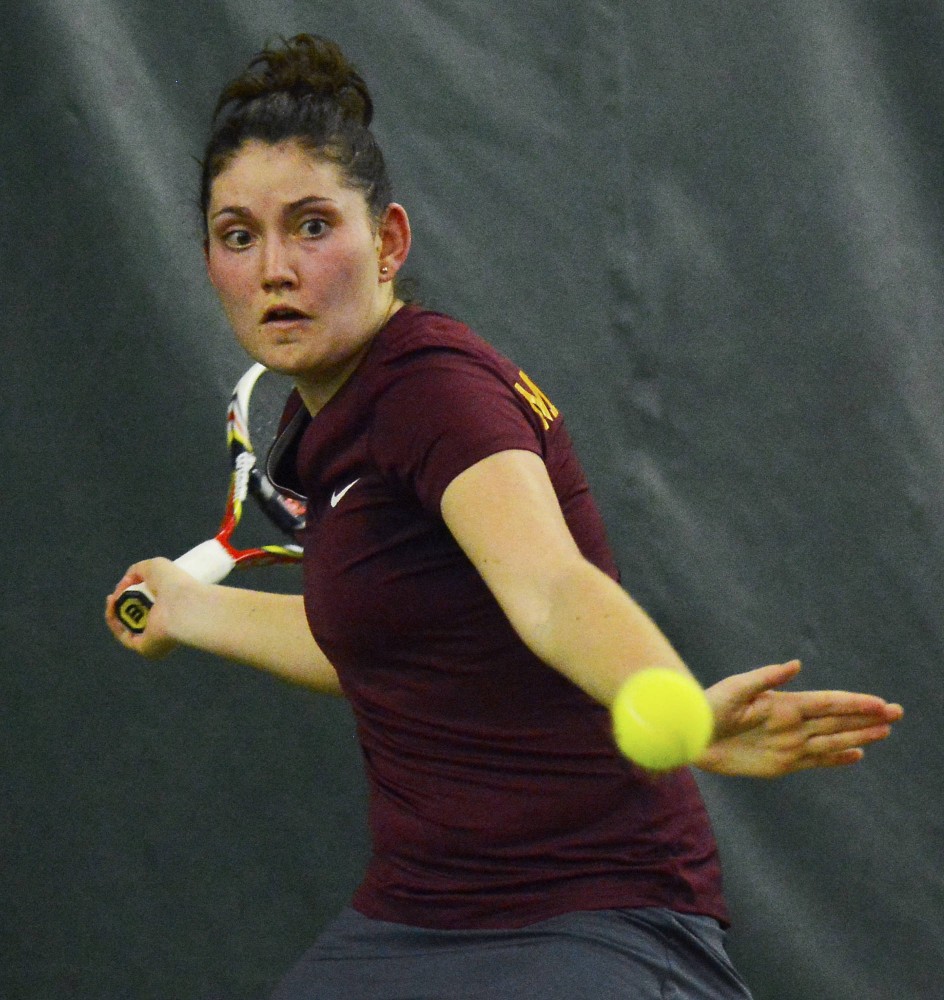 Heading into the Gophers’ border battle with Wisconsin, Tereza Brichacova has one wish.

“I just want to kick their butt,” the senior said.

The Gophers will have a chance to do so when the Badgers travel to the Baseline Tennis Center this Friday.

Head coach Chuck Merzbacher said any match against Wisconsin is a personal one.

“It’s just a heated rivalry,” he said. “That’s the way the girls feel, and that’s the way I feel. So we are pretty excited about facing them again.”

Last year, the Gophers played in Madison, Wis., which Brichacova said was hectic.

“At the start of the meet, our one doubles play was suspended for 20 minutes because the referee had to [verify] a rule in the rulebook,” Brichacova said. “We were arguing about one point. And in our [No. 2] doubles, they were basically arguing about every other point. Their fans were pretty loud, and it was just a mess.”

Despite the back-and-forth bickering, the Gophers won their doubles point after No. 2 and No. 3 doubles won their matches.

Merzbacher said it’s important to come out strong, and he expects the doubles pairings to do so.

“We want to put [pressure] on them with the doubles point,” Merzbacher said. “The doubles have been playing well lately, and we feel good about their performance.”

Brichacova, who plays No. 1 doubles, said she believes the rivalry against Wisconsin is probably the team’s biggest.

“I wouldn’t say the reason why Wisconsin-Minnesota rivalry is just based on the border,” Brichacova said. “I mean, the border rivalry is still there, but it’s more personal. They don’t like us, and we don’t like them.”

“The girl just played really well against me,” Brichacova said. “She hit every shot in the corner and on the line, so I couldn’t really do too much. But I tried to stay in the game to support my team. Even though I was losing, being able to stay on the court still gave them a little support.”

Although this is Caroline Ryba’s first year with the team, the Illinois native said she knew about the rivalry before she came to Minnesota.

“I was even following [the Minnesota-Wisconsin] match last year when I was back home,” Ryba said. “I’m guessing it’ll be intense and exciting for this year as well.”

This year, being at home could help the Gophers.

Minnesota is currently 7-1 at home meets but 1-2 on the road.

“We are just so used to it, and it’s really nice to be home,” Brichacova said. “It’s great to have your own fans cheering for you.”