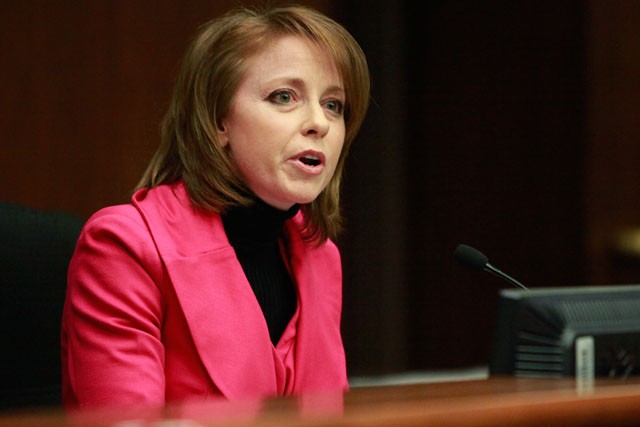 Former Rep. Laura Brod speaks in the meeting of the Joint Higher Education Committee on Regent Selection Wednesday at State Office Building in St Paul. Brod is one of the four candidates forwarded to the Legislature for a final vote Monday.

The ongoing process to elect four members to the University of MinnesotaâÄôs governing board turned political Wednesday night at the state Capitol.

Twelve candidates were interviewed at a joint meeting of the House and Senate Higher Education Committees, and four were voted forward for final approval by the full Legislature next week.

The Board of Regents, responsible for approving budgets, new building plans and policy changes, is nonpartisan. But when the voting process began, politics crept into the search.

The votes fell largely along party lines, with the Republican majority forwarding former Speaker of the House Steven Sviggum and Laura Brod, who served in the House from 2002 to 2010.

In the biggest upset, Brod was chosen over incumbent Regent Steven Hunter for the at-large spot.

Hunter, also the secretary-treasurer for the AFL-CIO labor union, said he was “well aware” of the possibility he wouldnâÄôt be chosen.

Although he was disappointed by the outcome, he said heâÄôs now going to talk with other legislators in hopes of winning the vote in the full Legislature. Legislators are free to roam outside the recommended slate on MondayâÄôs final vote.

“Bipartisanship at the Board of Regents has ended,” Rep. Tom Rukavina, DFL-Virginia, said after the final vote.

In a last-minute switch, David McMillan, an executive at a Duluth-based power company, was chosen over Duluth attorney William Burns.

Current Regent David Larson was the only candidate to receive widespread bipartisan support.

Rep. Joe Atkins, DFL-Inver Grove Heights, criticized closed-door meetings among different factions and caucuses at the Legislature to discuss the candidates, saying the process had taken on “the most partisan overtones” heâÄôd seen in his five years on the committee.

Rep. Bud Nornes, R-Fergus Falls, defended the process and said political influence on the board balances out as parties come in and out of power at the Legislature.

Nornes, describing Hunter as a DFL pick, said his voting for Brod was not a vote against Hunter.

“I donâÄôt know how much it really makes a difference,” he said.

Both Sviggum and Brod had an edge, Nornes said, because they were already well known around the House.

“ItâÄôs pretty hard to expect your friends not to vote for you,” he said.

The candidates interviewed Wednesday were chosen from a field of 46 applicants, which was narrowed to 12 in January through a screening and interview process led by a citizen-advisory committee.

The Legislature must replace regents representing the 2nd, 3rd and 8th Congressional Districts, which include counties south of the metropolitan area, the northern suburbs of Hennepin County and northeastern Minnesota.

One at-large spot must also be filled.

Candidates spent the past month making their case to legislators in private, one-on-one meetings. McMillan, an 8th District candidate, said he spent about three days a week at the Capitol introducing himself and proving his knowledge of the University and his district.

Once finalized by the Legislature, the candidates will become acting regents immediately and will participate in next monthâÄôs board meeting, said Ann Cieslak, the boardâÄôs executive secretary.