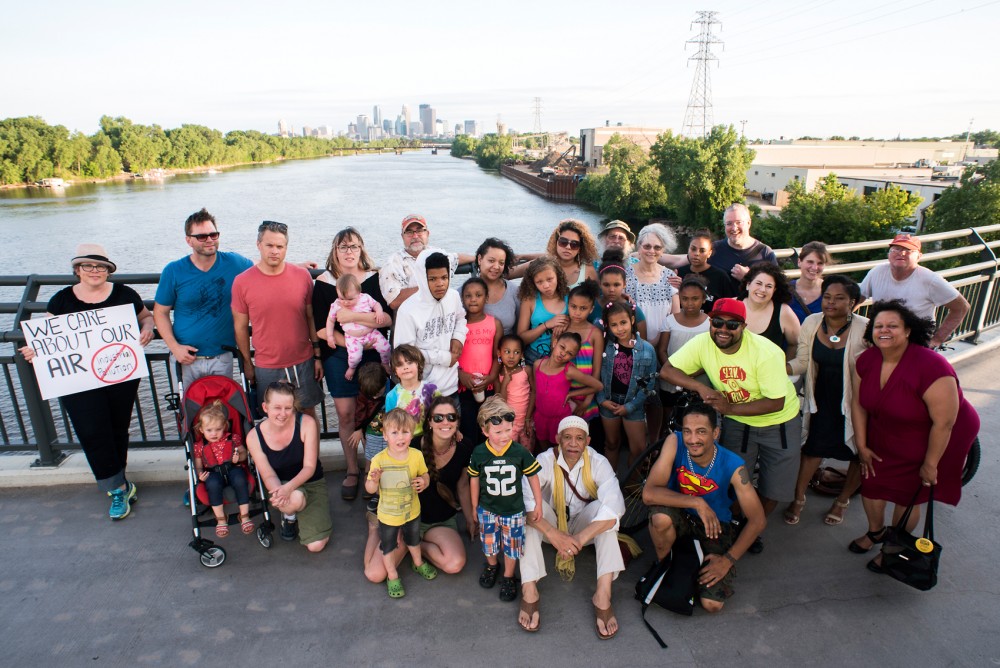 Members of the North Minneapolis community come together on the Lowry Avenue Bridge in unity against Northern Metal Recycling, as seen in the distance behind them on the evening of June 9. A report by the Minnesota Pollution Control Agency that lists the neighborhood surrounding the facility as the city's highest levels of lead poising and asthma hospitalizations, and points to the recycling facility as a leading cause in the issue.

When Roxxanne O’Brien and her family moved within a mile of Northern Metal Recycling two years ago, they began to notice new health problems.

O’Brien, who lives near North Lowry Avenue in Minneapolis, said she and her three kids have had more frequent headaches and respiratory problems since the move.

She said it isn’t just her family that’s had health problems, either.

“We’ve noticed a lot of headaches over here. I’ve noticed my neighbors, too, have headaches, not just me and my family, but my friends around the neighborhood,” O’Brien said.

O’Brien said she thinks pollution emitted from the Northern Metal Recycling plant on North Pacific Street is partially to blame.

The NMR plant has drawn controversy in past years due to emissions from its metal shredder, and now the Minnesota Pollution Control Agency is trying to revoke the facility’s air quality permit.

Presenters said the MPCA found the plant contributed to particle emissions that exceeded air quality standards, and the plant failed to disclose such emissions from their operations.

These elevated concentrations can cause health problems like respiratory issues and developmental problems in young children, according to the study.

Jeff Smith, director of the MPCA’s Industrial Division, said these effects could cause the most harm in the long term.

“We’re talking about respiratory irritation, damage to lung tissue, those sorts of things,” he said. “On the metals side, the lead certainly … may contribute to developmental problems with young children, and cardiovascular effects in adults.”

Now, the MPCA wants to revoke the building’s permit — issued in 2012 — because it is no longer valid, Smith said.

“We don’t think [the permit] represents how the facility is being operated; we don’t think it reflects a fair assessment of how the emissions from the facility are impacting the community, and the evidence of that is that we’ve been doing monitoring around the facility now for a couple years, and we’re seeing continued air quality exceedances,” he said.

But Jack Perry, a lawyer representing NMR, said the MPCA falsely claimed that facility owners lied about emissions, and the agency is trying to blame them for pollution caused by other factors.

“They want to blame the industrial area’s air exceedances for large dust particles, caused by truck traffic; they’re trying to blame that all on Northern Metals,” Perry said. “And they said to the press and in this notice of revocation that we didn’t tell them about it.”

He said none of the MPCA’s findings can be blamed on a specific plant because the agency’s data describes emissions of the whole area, not just NMR.

“They don’t like this facility; they are committed to doing anything nearly possible to try to shut it down,” Perry said. “And they’re doing it based upon a storyline that doesn’t add up.”

Rosier said particulate emissions from the facility’s metal shredder can be harmful for those with asthma or heart disease.

Smith said if the MPCA is successful in revoking the permit, NMR cannot operate unless they apply for a new one.

If they don’t apply and continue to operate without a permit, the MPCA could proceed to shut down the facility, he said.

Meanwhile, Yang said this outcome may be welcomed.

“If somehow, magically, Northern Metal leaves the area, I think most of us would be very happy,” he said.