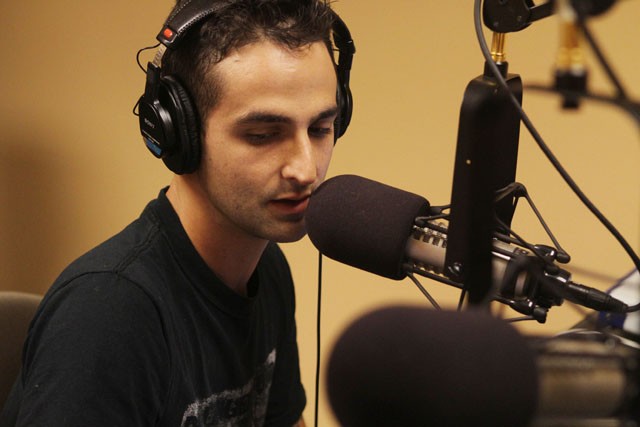 After ten years with Radio K, Out of Step, a punk themed radio show is moving to a podcast.

What: Out of Step RadioâÄôs 10th anniversary party

Back in May, Adam Mehl started patching together the celebratory schematics for the 10th anniversary of his well-nourished Radio K show, Out Of Step Radio. After a decade of giving the University of Minnesota airwaves a ruffian slant, Mehl had been mulling over what shiny new toys should be deployed for this midsummer soiree.

He had been working on putting together a compilation record for the anniversary party. He started tinkering with promotional material. During what Mehl thought was a party-planning meeting, the programming directors at Radio K proceeded to give his weekly punk hour a cruel kick in the groin.

Radio KâÄôs reclamation of the showâÄôs airtime wasnâÄôt a decision aimed directly at MehlâÄôs program. It was the result of a slow crawl toward diminishing alumni presence throughout their programming. Fellow co-host Nate Rastetter, who graduated in 2003, bowed out of his on-air duties back in 2010 when the station began requiring each show to have at least one student on air with a two-host limit. The station struck their final blow earlier this year when they decided to close their studio doors to all alumni.

So on June 26, Mehl said goodbye to his Sunday afternoon timeslot and Radio KâÄôs homey youth-run studio, which allowed him to be a local punk tastemaker for the last seven of Out of StepâÄôs 10-year broadcast history. But never ones to bow down to the man, Mehl and Rastetter have been doling out their revived radio hour in podcast form since July 3.

âÄúI wanted to do [a podcast], and this was sort of the kick in the ass for me to do it,âÄù Mehl said. âÄúI wasnâÄôt super thrilled about it because I love Radio K, and I like being part of the station.âÄù

But as Mehl and Rastetter wrap up their first month of online offerings, theyâÄôre starting to taste the lemonade that theyâÄôve squeezed from Radio KâÄôs lemons. They can make call-to-action statements and douse bands with endorsements or condemnations as they see fit. Now that theyâÄôre not speaking through a family-filtered microphone, their songs need not be censored or lyrically sterile âÄî a fact that will now allow them to play the other 90 percent of punk rock.

âÄúThere were so many songs IâÄôve wanted to play but you canâÄôt play, because it has a bad word in it,âÄù Rastetter said. âÄúNow we can play whatever we want.âÄù

Now that their passion project has been given a bit of a soapbox treatment, the show belongs to Rastetter and Mehl even more so than it did on campus. ItâÄôs also why their regular turnstile of guest DJs has become more important âÄî like this weekâÄôs inclusion of MinneapolisâÄô Western Curses guitarist Pete Ayres.

âÄúIâÄôll be going through phases where all IâÄôll listen to is hardcore or garage or pop-punk,âÄù Mehl said, âÄúand I want to make sure that the genres that IâÄôm not listening to are represented.âÄù

Their close relationship with the local punk scene has been one of the showâÄôs largest points of support, and the bulk of the acts on this weekâÄôs anniversary party lineup have worked with Mehl and Rastetter in the past. Matt Castore of local hardcore act Condominium has been trading recording space for ad space âÄî a necessity for recording in-studio performances since their Radio K exile.

âÄúThereâÄôs a lot of crossover for someone like me or Adam who like all these different genres,âÄù Rastetter said. âÄúIt seems like the really active people in the scene are more open-minded instead of sticking to one little subgenre.âÄù

Still, Out of Step maintains a decidedly narrow scope. But itâÄôs this committed focus of genre-driven radio hours that have been whittled down across the flavor-of-the-week airwaves.

âÄúI think thereâÄôs a place for specialty shows, and I wish they were a little more prominent because I think thatâÄôs some of the coolest stuff,âÄù Mehl said. âÄúOut of Step, for example, was playing current Radio K staples for years beforehand, like King Kahn and BBQ Show and Hunx and His Punx.âÄù

With optimism reviving their creative pursuit and a greater opportunity to pursue a national audience, Out of Step Radio seems to be celebrating a rebirth more than an anniversary. In true punk-rock fashion, it is good to see some people rewarded for stepping out of line.