UPDATE: the first body has been identified, and survivors share their stories of Wednesday's fire. 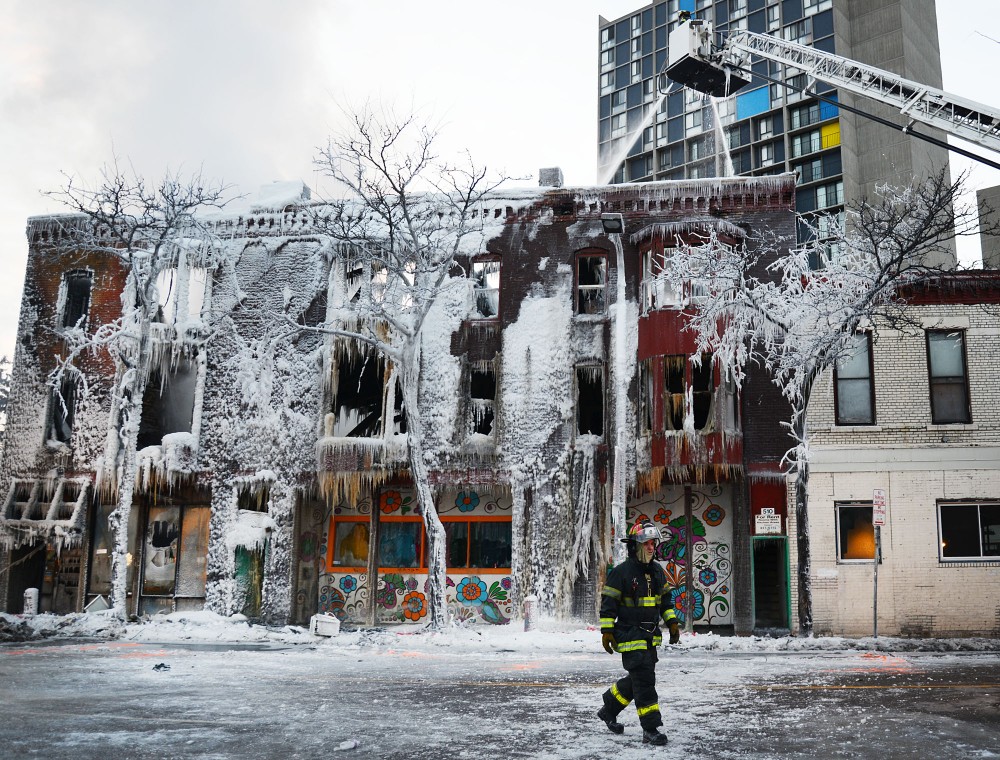 Firefighters continue to hose down Minneapolis apartments and a grocery store that exploded and caught fire Wednesday morning near Cedar Riverside. A total of 14 people were taken to hospitals, 6 in critical condition. The cause of the fire is still being investigated.

Two people are dead after an explosion and fire Wednesday in a Cedar-Riverside building, according to the Minneapolis Fire Department.

Officials found two bodies – one Thursday afternoon and one Friday morning – in the wreckage of the building, located at 516 Cedar Ave. They have since finished demolishing the building after Wednesday’s three-alarm fire collapsed the upper floors and sent 14 victims to local hospitals.

Officials now believe everyone thought missing after the fire is accounted for, the fire department said Friday. The second body found in the building has yet to be identified.

The building housed a grocery store and two floors of apartments. Some victims said the explosion trapped them in the upper floors and that they had to jump out of windows to escape the flames.

Wednesday’s frigid weather forced first responders out of the building before they could rescue everyone inside. After they contained the fire, firefighters slowly picked through the rubble for hours in the days after the blast, stopping demolition when they found bodies.

At a Thursday afternoon news conference, Fruetel said the department was leaning toward a natural gas leak as the cause of the explosion but still hasn’t ruled anything out.

Witnesses told investigators they smelled gas at the time of the explosion, Fruetel said. The debris field from the blast also suggests a natural gas leak, he said.

Becca Virden, a spokeswoman for CenterPoint Energy, said the company’s monitoring system outside the building didn’t show any irregularities before the explosion. And nobody called the company to report smelling gas in the building in the weeks before the incident, she said.

Virden said CenterPoint investigators, working with the fire department, have eliminated the possibility that a leak in the main gas line led to the blast. But it’s still possible that natural gas inside the building could have caused it to explode, she said.

Fruetel said it’s possible that officials may never know the cause of the fire.

Other nearby buildings, like a mosque that was damaged in the blast, will not be demolished, he said.

Two victims spoke to reporters from their Hennepin County Medical Center hospital beds on Friday. They described a scene of chaos and panic that led them both to jump from their apartment windows to the safety of the street below.

Abdi Qobey, 59, said he left his room shortly after the explosion around 8 a.m. on New Year’s Day. The inside of the building looked like a bomb had detonated, he said. He saw two men near the stairs, one of whom was on fire.

Qobey said he ran back into his second-floor room, put on shoes and a jacket, and looked out the window. A police officer on Cedar Avenue told him he had no choice but to jump to the street.

The jump broke Qobey’s left heel and four bones in his left foot. He also lost his keys, cellphone and all the money in his apartment.

Hersi Hassan also jumped from his second-floor apartment to safety.

Hassan, 29, said through an interpreter that before he jumped he saw people in the building who had been burned so badly they were unrecognizable. He and his two sisters jumped to safety, and they were all taken to the hospital.

Though he’s mainly concerned with his recovery, Hassan said he’s worried about what will happen to him once his broken leg heals and he leaves the hospital. He said he lost all of his money in the fire and may not be able to find work.

Minneapolis Ward 6 City Councilmember-elect Abdi Warsame has said he plans to bring together community leaders to support victims of the fire.