Thousands turn out for Bernie 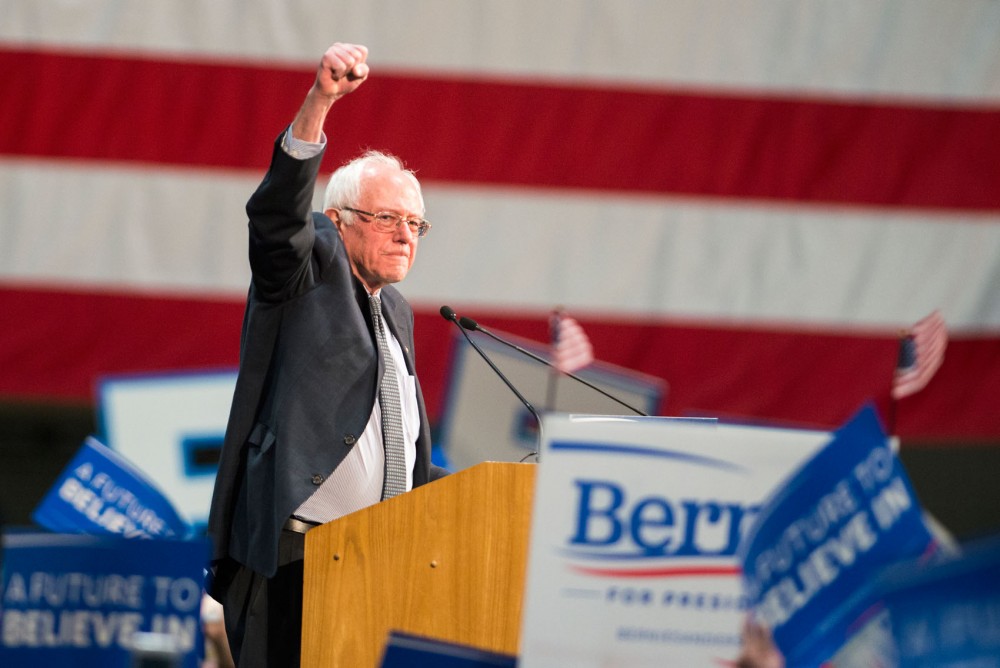 Democratic presidential candidate Bernie Sanders pumps his fist into the air, greeting a crowd of nearly fifteen thousand supporters who attended his rally at the St. Paul RiverCentre on Tuesday evening.

Keaton Schmitt
Standing shoulder to shoulder and wall to wall, a sea of Bernie Sanders supporters chanted, “Bernie,” at the St. Paul RiverCentre Tuesday evening, awaiting the presidential hopeful’s on-stage arrival.
Vying for what he called “real change from the grassroots up,” the senator from Vermont addressed a horde of nearly 15,000 on issues including the gender wage gap, dilapidated infrastructure and youth unemployment. His Twin Cities visit came just hours after a speech to a group of 6,000 in Duluth.
Still, Sanders and other presidential hopefuls in 2016 will face young voters who tend to be skeptical of the federal government.
Tuesday’s visit focused on addressing college tuition, which Sanders said he hopes to eliminate and replace with funds from a tax on Wall Street corporations.
In turn, he said he’d use the money — about $1 trillion — to rebuild bridges, roads and dams nationwide. The construction projects would employ about 13 million, Sanders said.
“Our airports, our levies, in many parts of this country are collapsing,” he said. “And I know people have had a bad experience with a bridge in Minneapolis.”
Sanders also mentioned intentions to raise the federal minimum wage to $15 per hour and vowed to close the gender wage gap.
“People are sick and tired of working longer hours for lower income,” he said. “American people are saying very loudly and clearly that we’ve got to create an economy that works for all of us, not just the 1 percent.”
Before stepping off stage, he called for the end of climate change with the use of alternative fuels and the creation of an immigration reform that would allow for a straight path toward citizenship.
University students —including Isaac Rothberg, who introduced Sanders alongside Hamline University student Farhiya Ali and Rep. Keith Ellison, DFL-Minneapolis — attended in support, backing Sanders because, he’s honest and grounded in social justice issues they said.
Mechanical engineering sophomore Alex Harris said that, in comparison, Sanders’ main Democratic opponent, Hillary Clinton, brushes over issues like police brutality and LGBT rights.
“I do think [supporting Sanders] goes beyond college Marxism and free stuff,” he said.
While microbiology and animal science junior Sveta Slobodyan said she once supported Clinton, Sanders’ ideals better conform to her own.
“He is the candidate that most fits the values of the average American person,” Slobodyan said. “He has always stood by everything he says.”
All candidates this election season may, however, face backlash from a group of young voters distrustful of American government and politics, said Larry Jacobs, director of the Center for the Study of Politics and Governance in the Humphrey School of Public Affairs.
Still, millennials gravitate toward Sanders, Jacobs said, because he promises large-scale policy changes.
“Bernie Sanders is talking about this kind of different future,” he said. “I think also the values he’s projecting of dramatic change — he calls it a political revolution — is registering particularly with younger voters. “
Of democratic Minnesotan registered voters surveyed last week by the Star Tribune, 59 percent reported a preference for Hillary Clinton, while one in four preferred Sanders for the presidential nomination.
About half of all interviewed voters disapprove of Clinton, and 38 percent find Sanders unfavorable, according to poll results.
If the race ends in a face-off between Sanders and businessman Donald Trump, Minnesotans would vote Democrat.
Beside issues presented Tuesday, Sanders supports a universal health care system, along with equal rights for women and the LGBTQ and racial minority communities, according to his campaign site.
Clinton trails behind Sanders in Iowa, according to a January CNN poll, but Jacobs said he thinks support for the two will be neck-and-neck as the first presidential caucus, set for Feb. 1, approaches in less than a week.
Delete Image
Align Left
Align Center
Align Right
Align Left
Align Center
Delete Heading