By May, there will be seven historically black greek organizations on campus. 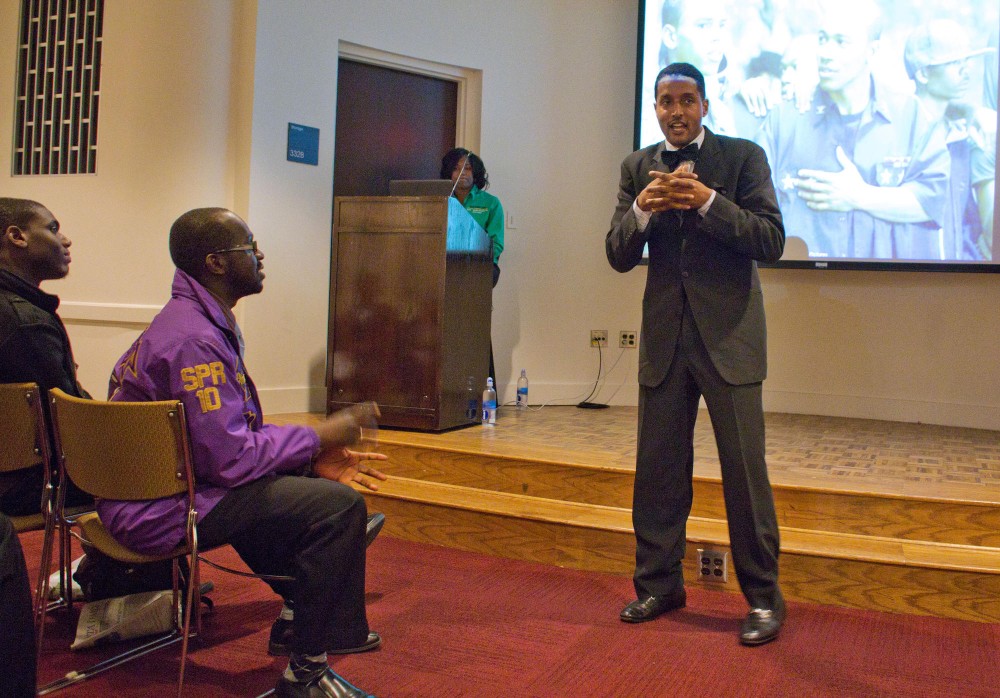 Attorney Rasheed Ali Cromwell presents the Miseducation of the Black Greek Experience Tuesday night at Coffman Union. Cromwell spoke to various misrepresentations of black greek life and how to focus on leadership development.

Rasheed Cromwell, a historian and scholar of historically black greek organizations, said the University of Minnesota is experiencing a âÄúrebirthâÄù of black greek life on campus.

By the end of next semester âÄî which will mark 100 years of black greek life at the University âÄî four historically black fraternities and sororities will have returned to campus since 2009.

At that point, the University will host seven of the Divine Nine historically black greek organizations, which is more than  what have been on the campus at one time in nearly 20 years.

âÄúIâÄôm very encouraged by the movement I see,âÄù Cromwell, who closely follows the UniversityâÄôs black greek organizations, said. âÄúIâÄôm excited to see the growth and development.âÄù

Sam Ndely, the president of Phi Beta Sigma Fraternity, said the demand for this type of re-emergence has always been there, but that it forces the existing black greek community to re-evaluate its purpose and relevance to the University community as a whole.

These organizations earned their place in history because of their impact on the Civil Rights movement and âÄúforward progression of the African American community,âÄù but have since fallen victim to stereotypes, Ndely said.

âÄúSome people think all black greeks do is step and stroll,âÄù he said. âÄúNow weâÄôre all asking ourselves one question: How do we remain relevant?âÄù

According to Cromwell and a number of black greeks on campus, the answer is to re-evaluate the purpose, image and legacy behind these organizations and expand their reach to dispel stereotypes.

At a presentation he gave at the University on Tuesday night, he addressed what he calls âÄúThe Miseducation of the Black Greek Experience.âÄù

He said what began as support systems for young African-American leaders have been commercialized and misrepresented on a national scale.

Cromwell has given a presentation on the topic at 125 different campuses, but said his time at the University was twoyears in the making and had special significance.

Arsenio Ward, Black Student Union president, said University students were first introduced to Cromwell, an attorney in Washington, D.C., at annual black leadership conferences. They impressed him with their questions about the state of black greek life on campus.

CromwellâÄôs advice and knowledge falls in line with what many organizations had already been doing, Anthony Gnakadja, president of Alpha Phi Alpha Fraternity said.

He said his organization has begun to build stronger networks and increase the selectivity of candidates in their membership intake process since 2008 when they took a year to re-evaluate their purpose.

âÄúSelectivity is key âÄî especially for our organizations,âÄù he said. âÄúWe definitely donâÄôt want a member who doesnâÄôt match up with our mission to hinder our reputation.âÄù

As GnakadjaâÄôs organization prepares for its centennial anniversary, the newest addition to historically black greek culture at the University is going through growing pains to establish that sort of reputation, Tahirah Whitelaw, vice president of Phi Beta Zeta Sorority said.

âÄúItâÄôs been hard to let people know what Zeta stands for,âÄù she said.

But Whitelaw said she hopes the group sets the precedent for reintroducing black sorority life to campus.

Since the groupâÄôs reintroduction last spring, at least one other historically black sorority has held informational sessions for an undergraduate chapter, sources said.

Ndely said black greek chapters are creating a movement that supports the image and success of the University.

He said he had friends who left the state for colleges with a more developed black greek life, but hopes the rebirth will contribute to the academic success of black students.

He said it could also boost the UniversityâÄôs profile in the eyes of black students.

âÄúItâÄôs a very positive outlook on the institution, it attracts students to want to stay in the state instead of going south for school,âÄù he said.

âÄúThese organizations are really paramount for the support, retention and graduation rates of students of color on predominately white university campuses,âÄù he said. âÄúReally overall, it contributes to diversity.âÄù

âÄúI donâÄôt even know where these stereotypes came from, to be honest,âÄù he said. âÄúI feel what you come to see in all of these organizations is that we are really the elite. We are the ones that are going to move on and become leaders.âÄù