The Vikings confirmed they will host their home finale against the Bears next Monday night on campus. 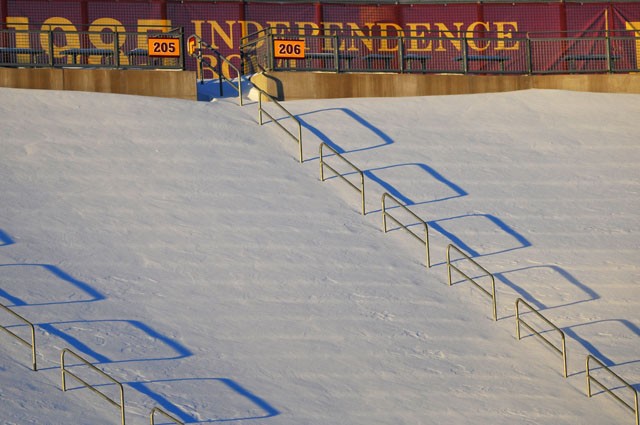 The Minnesota Vikings-Chicago Bears game scheduled for next Monday night will be played in TCF Bank Stadium.

The Vikings had said that they would have preferred to play the game at the Metrodome, where heavy snowfall caused a roof cave-in early Sunday morning. But around 7:30 p.m. Tuesday, the Vikings tweeted, “Bundle up: Monday’s game against the Bears will be played at the U of M’s TCF Bank Stadium”

The game will be played 29 years to the day since the Viking’s last outdoor home game at Bloomington’s Metropolitan Stadium in 1981. They lost that game 10-6 to the Kansas City Chiefs.

It will be the Vikings’ second game on the University campus. On October 5, 1969, they beat the Green Bay Packers at Memorial Stadium, a game displaced by a Minnesota Twins playoff game at Metropolitan Stadium.

In addition to the biting cold and the snow piled up from a two-day blizzard that dumped 17 inches on the Twin Cities over the weekend, workers at TCF Bank Stadium must also de-winterize the facility, which was shuttered for the season after the Gophers football team finished its season.

About one quarter of the field had been shoveled by Tuesday afternoon, Gophers football spokesman Andy Seeley said.

âÄúWe have to get all the systems in the stadium back online — all the bathrooms, all the concession stands and everywhere the fans would be,âÄù Athletics spokesman Garry Bowman said.

Two crews of 100 workers will work in 8-hour shifts every day between now and Monday to get the GophersâÄô stadium ready for its first-ever NFL game. Bowman said the top priority right now is removing snow, which in some places has piled up in three-to-four foot drifts inside the stadium.

The Vikings have not yet released ticket information. TCF Bank Stadium holds 15,000 fewer people than the Metrodome.