Most firefighting gear is designed for men. 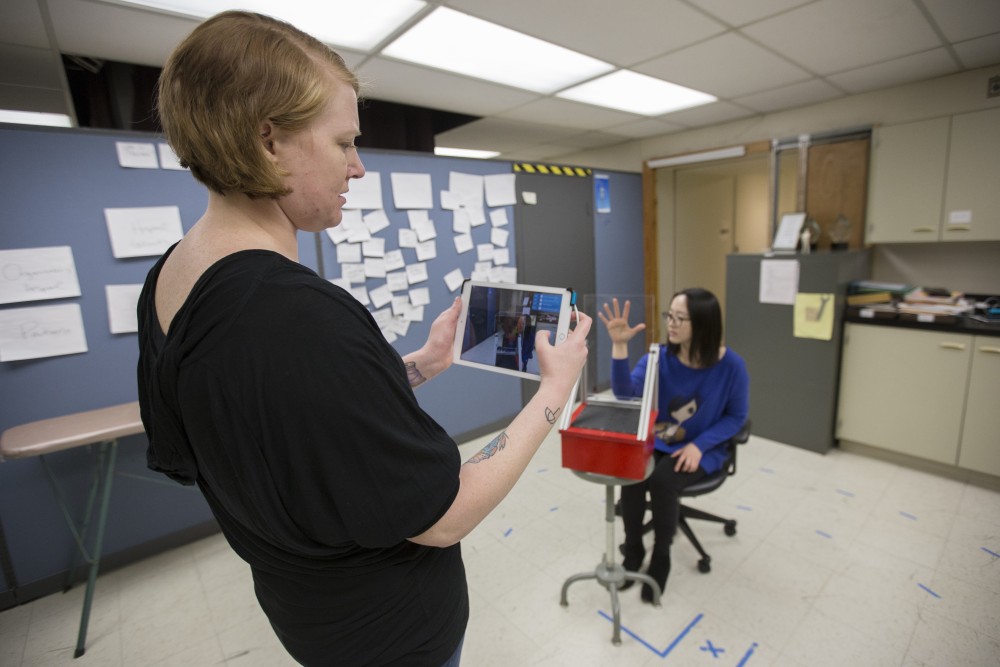 Apparel studies senior Emily Seifert circles around Apparel studies PhD candidate Nokyeon Kim to complete a 3D scan of her hand at McNeal Hall on Tuesday, Feb. 27, 2018. The scanner, which runs off an iPad, makes a virtual 3D model of the subject to help create ideal uniforms for occupations like firefighting.

Researchers from the University of Minnesota’s College of Design want to make clothing better suited for female firefighters.

As part of the five-year study, the team is working to improve women’s firefighting gloves, which often don’t fit women’s hands correctly. The researchers hope their improvements will also help the fit of women’s clothing in other male-dominated careers.

The researchers are conducting a pilot study of hand dynamics to analyze how to create the best fit for women’s gloves, said researcher Robin Carufel. The team will then begin to compare the hand patterns to determine how to best make gloves effective and comfortable.

The team will soon begin attending conferences and speaking to female firefighters in focus groups to get more information about their clothing needs, said lead researcher Linsey Griffin.

Griffin said if departments want to recruit female firefighters, they must provide clothing that fits correctly, as this can be a barrier to safe and accurate work.

For example, a chest strap can be painful across a woman’s chest, especially if she has larger breasts, and can lead to injury, Griffin said.

Because careers like firefighting are dominated by male employees, the clothing is designed for men’s bodies and not women’s, Carufel said. Even if clothing is labeled “uni-sex,” it still often fits male bodies better, she said.

“Clothing, like their gloves, [is] usually one size fits all, which is something you can’t have in an industry like this,” said researcher Emily Seifert. Minneapolis Fire Department Deputy Chief Melanie Rucker said in her 18 years of firefighting experience, women’s clothing has improved, but many articles still aren’t functional or comfortable. For example, gloves are often too big and the fingers are too long, which makes it difficult to grasp tools, she said.

‘Women are different. We fight fires differently and use our equipment differently,” Rucker said.

In addition, companies often have their own sizing charts, making the sizing inconsistent and confusing, especially if a worker changes locations, Seifert said.

“Currently, even if the clothing is made for women, it still doesn’t fit well,” Griffin said.

While some departments have made small improvements like buying women’s boots, there haven’t been any changes across the industry, Griffin said.

The researchers hope to create clothing that won’t distract female firefighters, letting them focus solely on their tasks rather than their clothing.

“We want to make clothing less of a hazard and more of an asset,” Carufel said.

The researchers are looking to improve the fit and function of clothing beyond firefighting to careers such as construction and electrical work, which are also male-dominated fields that use similar equipment, Seifert said.

More women are considering firefighting as a career, and clothing providers need to make clothing that fits them correctly, Rucker said.

Rucker said ill-fitting clothing presents another hurdle on top of the challenges women face in a male-dominated career.

“It’s difficult because you get second-guessed on your abilities just because you’re a female. It seems that no matter how far along you are, you still have to prove yourself,” Rucker said.