Some studio apartments near the University of Minnesota can cost upward of $1400 per month. 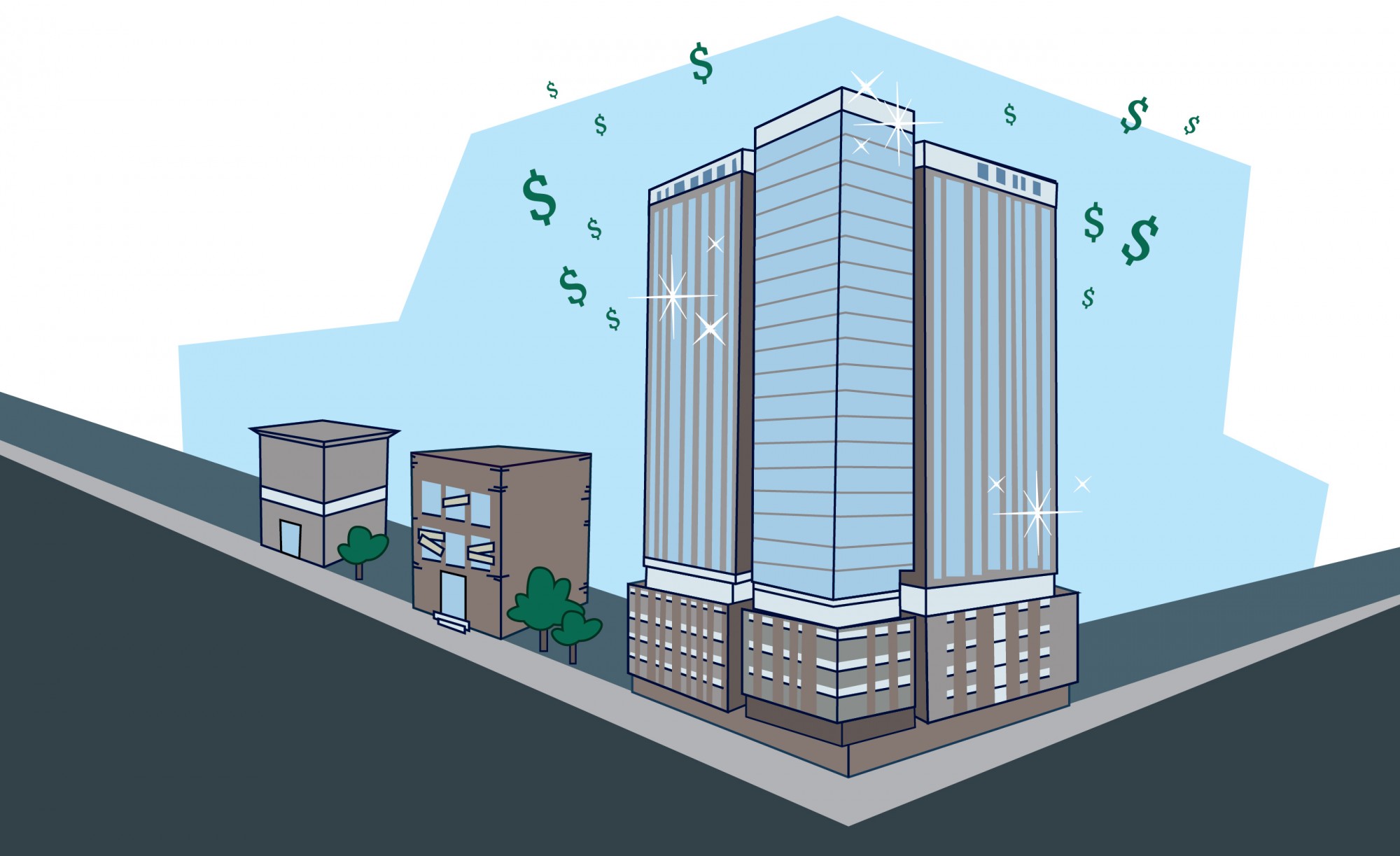 For around $1,735 per month, you can rent a one-bedroom, one-bathroom penthouse apartment at Hub Minneapolis, one of the newest luxury apartments aimed at students near the University of Minnesota. The apartment complex is roughly a 10-minute walk from Folwell Hall.

For $35 less per month, you can rent a one-bed, one-bath unit in New York City that is a 10-minute walk from Central Park.

In the past decade alone, neighborhoods surrounding the University, including Dinkytown, Marcy-Holmes, Prospect Park and Cedar-Riverside have seen an influx of more than 30 new apartment buildings, with at least three more slated to open by fall 2020.  These newer apartments have prompted discussions between students and community stakeholders about housing affordability in University communities.

Alexandra Dimakos is a first-year nursing student who lives at Hub Minneapolis. While her $900 per month rent is cheaper than her brother’s, who goes to school in downtown Chicago, she said she would never be able to live in her current apartment if not for financial support from her parents.

Dimakos’ mother, Kristin, said she thought the apartment was worth the cost when comparing the amenities, security and location to other housing options near the University.

“We didn’t have this luxury apartment concept when I went to school,” Kristin said, who attended the University of Utah in 1990 and helps her daughter with rent for a private bedroom in her four-bedroom apartment. “We lived in these low-rise apartment buildings, with no security. I survived for a year.”

More than 15 of the apartments built after 2010 advertise themselves as catering towards high-end audiences, with words like “luxury,” “high amenity” and “resort-like” used on their websites and in advertising materials.

Gone are the days when grill stations, study areas or gyms were considered luxuries – in most new build apartments, they are often the standard.

More than a dozen apartment complexes have rooftop terraces. At least nine feature yoga studios. At least eight offer tanning beds and at least seven offer pools or hot tubs. Movie rooms or theaters are located in at least four apartments near the University.

From there, the luxuries students have access to all depends on just how much they are willing to pay: Hub Minneapolis doesn’t just offer students the chance to relax in a rooftop pool, but cool down in a nearby poolside cabana. Included in The Link’s amenities are a sauna, music studio and golf simulator. After using the apartment’s podcasting room, residents of HERE Minneapolis, a Prospect Park apartment complex slated to open in Fall 2020, can take a break in the courtyard’s “glamping” — or glamorous camping — pods.

“Students, in a lot of ways, are a bit of a captive market, because they want to be near their universities. So folks are willing to really, in some ways pay more than they can afford,” Kaplan said.

Affordable housing near campus isn’t impossible. Riverton Community Housing, which owns Fourth Street Housing Co-Op and the Brook Avenue Housing Co-Op, is based on the co-operative living model, where buildings operate at cost to make units more affordable. Because Riverton’s goal is not to make money, rents are only raised to cover operating expenses and range from $200 to nearly $1000 less than comparable apartments owned by for-profit companies.

While some privately-owned properties, like The Elysian, are family-owned and operated, many others are owned or managed by large real estate companies.

However, CA Ventures is dwarfed by Greystar, owner of The Marshall and Hub Minneapolis. The company owns more than 167,000 units worldwide, with assets totaling more than $35.8 billion.

According to Kaplan, the costs of construction for new apartment complexes can be so high that many of these new developers simply have little incentive to build apartments that are reasonably affordable. Despite additional upfront costs, offering high-end, amenity-rich units is more profitable in the long run than building more affordable apartments.

Additional factors that boost rent prices include the University’s proximity to downtown and access to public transit, said Ed Goetz, director of the University’s Center for Urban and Regional Affairs. Housing subsidies, Goetz said, are another issue.

The majority of undergraduate students are currently excluded from housing subsidies, which makes affordable housing more accessible. However, the Minneapolis City Council is looking to expand its inclusionary zoning policy to include more students and increase affordable units near campus.

“Students need affordable housing and they’ll need it for that period of time when they’re at a period in their lives where their earnings are quite low,” Goetz said. “If students don’t get University Housing, then they are competing on the market with others for other low income housing.”

These newer luxury student housing options come at a cost — not just to students or parents, but to the communities in which they’re built, said Chris Lautenschlager, executive director of the Marcy-Holmes Neighborhood Association.

“These newer buildings that are being proposed and popping up [all] over Marcy-Holmes are displacing some of the older housing that could have been affordable. Now, those affordable options are getting fewer and far between,” Lautenschager said.

Supporters for luxury housing often argue that new builds decrease the cost of the older, more affordable properties because of the availability of housing choices, Goetz said. That rarely happens though, he said. While new luxury apartments may slightly depress the rent of other luxury apartments, the cost of all other area housing options typically go up.

“If you’re building luxury housing … you’re putting pressure on other owners and developers of luxury housing. That’s why you see these kinds of over the top amenity packages,” Goetz said. “They’re trying to out-amenity each other.”

Kendre Turonie, program director for the University’s Off-Campus Living, said that she has seen a jump in the number of new apartments and amenities they offered since she started at the University in 2003.

Turonie said she receives emails and phone calls from parents and students concerned about housing prices on a near-daily basis. She said that students may feel rushed into finding a place to live, especially during their sophomore year, when, for many, it’s their first dealing with living off-campus or signing a lease.

She said she hopes students educate themselves about more affordable housing options and weigh whether shaving a few minutes off their walk to school is worth several hundred dollars more in rent.

“I think overall, the University is supportive of affordable housing as a concept. But we’re not in the business of getting involved with policy creation of the city,” Turonie said. “It’s getting the attention of the administration a little more. I think there’s going to be some more conversations around housing affordability.”

Paying for a dream

Kloey Jacobs, a neuroscience major, lives in a one-bedroom, one-bathroom apartment in Marcy-Holmes. Jacobs said the apartment is a bit dilapidated, with missing window screens and broken floor tiles. But, at a little more than $800 per month, their apartment is more affordable than the high-rises they have seen pop up near the University.

“These housing costs are not at all tailored to the people that inhabit the area they are built in,” Jacobs said. “Students, while still maintaining regular attendance at University, cannot be expected to make enough money to support themselves at a $1200 per month studio apartment.”

As a student who lives in a one-bedroom, one-bathroom apartment at The Link, Michael Yu said his total rent, including parking, utilities and pet rent, is close to $1,900 per month. Yu said he’s privileged in that his parents pay for his rent; however, he is expected to pay his parents back once he graduates and gets a stable job.

Even if Yu were to work full-time at his current job on top of being a full-time student, he would still fall short on rent by several hundred dollars, not accounting for expenses like food.

“While there is some cheaper housing near the U, I don’t really think there’s nearly enough to meet demand,” said Yu. “A lot of people have to bite the bullet, or just live further off campus in not-so-great areas with not-so-great quality and have to deal with the commute and parking.”

Yu said living at a higher-end apartment can often be seen as a status symbol. On their websites, many of these apartments intersperse photos of young, vibrant, smiling models with photos of their apartments and amenities. They are selling not just an apartment, but a dreamy lifestyle.

Take, for example, the tagline for FloCo Fusion, an apartment that offers tanning beds, party buses and Apple TVs in each apartment: “Quit dreaming about how the other half lives. At FloCo, you are the other half.”

*All apartment prices are based off of 2020-2021 leasing information.