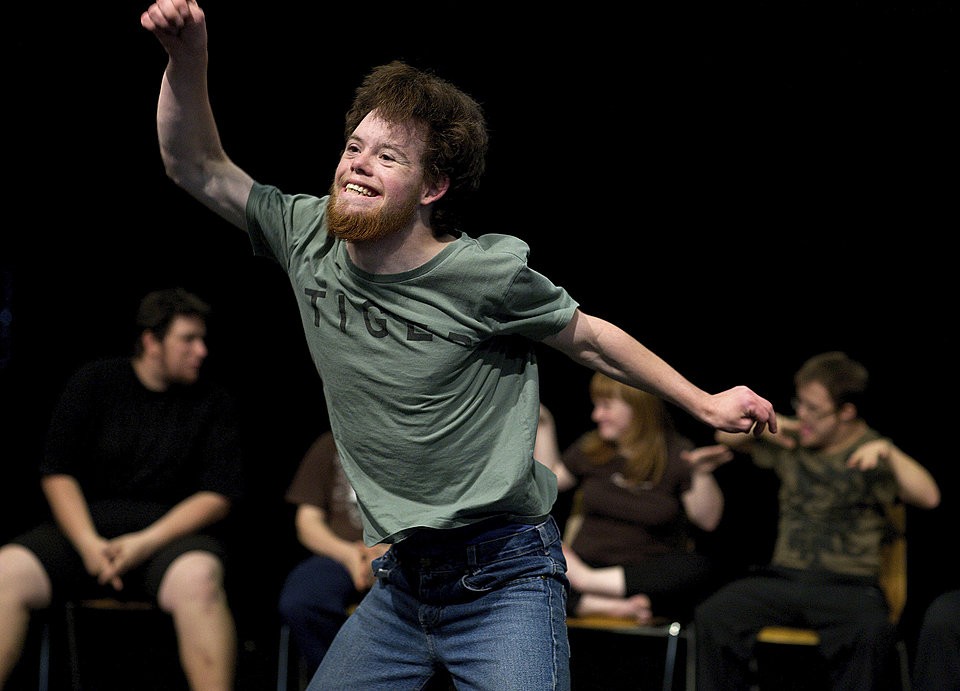 If performance artist JÃ©rÃ´me Bel’s work does anything, it gets the audience talking.

His newest piece, “Disabled Theater,” is a collaboration with Switzerland’s Theater HORA, a collective of intellectually and physically disabled actors. Bel has been accused of everything from exploitative to genius because of the piece.

“The problem about traditional theater is that it’s based in manipulation of the audience — it’s focused on illusions and strategies,” Bel said. “So for me, I ask myself, how can I be as transparent as possible?”

“Disabled Theater” is about as transparent as theater can get. Its structure is simple. Ten water bottles sit next to 10 chairs, which are filled by 10 actors from Theater HORA who, for the next 90 minutes, perform what Bell calls a “documentary” of their interactions with him. Since the performers speak in Swiss German, there’s also a translator on stage.

“When we were making ‘Disabled Theater,’ I did what I always do I asked questions,” Bel said.

In the performance, these questions feel more like assigned tasks. The piece begins with the actors giving the audience basic information, formally prompted by the translator.

They tell the audience their ages, names and professions and then move on to the main focus of their work: dance.

Bel said he isn’t interested in characterizing the performers in any way, so he asked each performer to choreograph their own solo dance to a song of their choice. All of the dances are in the show and reveal something about the performers.

Actor Julia HÃ¤usermann, for example, dances to the tune of Michael Jackson’s “They Don’t Care About Us” in loose-fitting street clothes. Her punctuated movements electrify the stage with their energy. The reactions from the rest of the ensemble add to the image — some excitedly tap their toes to the beat, others are distracted by their own thoughts and one even yawns. “Disabled Theater” creates an environment of uncensored expression, which is compelling as well as uncomfortable.

Philip Bither, the Walker Art Center’s senior curator of performing arts, said he was deeply moved by this idea.

“People are so used to a performance that has elaborate lights, elaborate costumes and a full production. JÃ©rÃ´me strips away all of that,” Bither said. “He honors humans on stage.”

Bel’s work isn’t about bells and whistles. He’s fascinated with displaying real people and embracing all their qualities. For “Disabled Theater,” he uses his style to break social barriers.

“My parents told me when I was 7 or 8 that I shouldn’t look at disabled people because it would make them uncomfortable,” Bel said. “If you don’t look at people, you don’t know who they are.”

Bither said Bel’s work is “a delight and a provocation,” which rings especially true for this piece. Since some of the performers have intellectual disabilities, whether they truly consent to the work has become a point of contention.

When Theater HORA approached him, Bel almost didn’t participate in the project because of this.

“I knew it was not for me. I had no expertise, and I knew it would be very difficult to deal with expressing this issue,” he said.

But Bel gave the group a chance, and after working with them for a few days, he found himself completely moved by the company. Although he’s faced a good deal of scrutiny over the project, Bel said the show is not meant to exoticize disability but to illuminate false preconceptions about it.

“Maybe there’s a chance that we will understand them a little better, and when you understand something better, you don’t have to be afraid,” he said.