Gophers players get a shot for Minnesota Wild at development camp 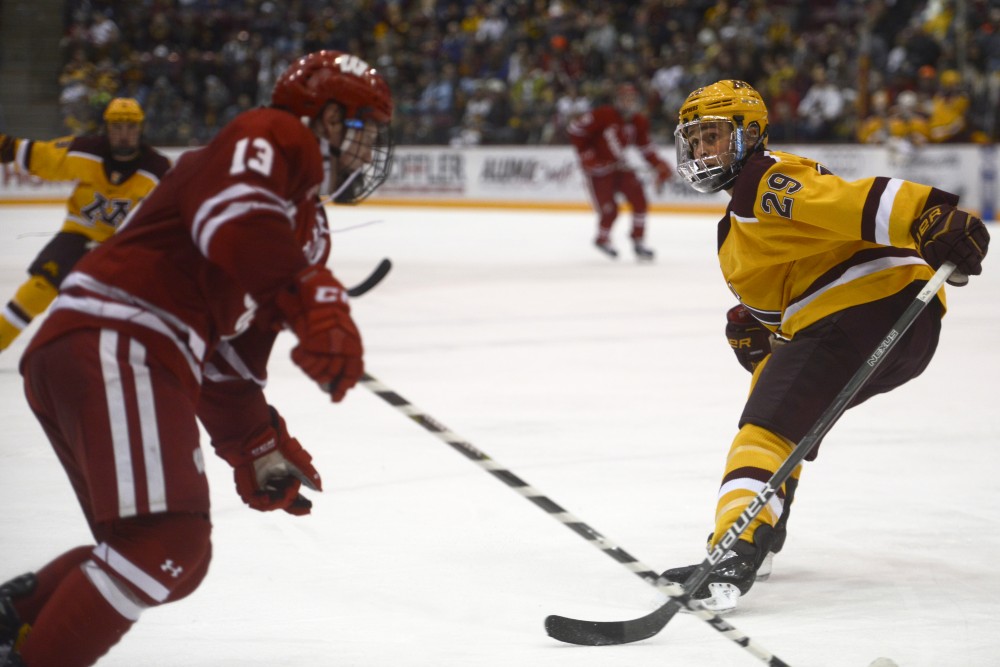 This offseason wasn’t completely “off” for three men’s hockey players.

Though the Gophers’ season ended in disappointment by missing the playoffs and their longtime head coach stepped down, captain Tyler Sheehy, defenseman Jack Sadek and goaltender Mat Robson played at the development camp for the Minnesota Wild of the NHL to condition for the season and look to their hockey careers beyond their time with the Gophers.

“It was a fun week,” Sheehy said. “I mentioned to the player development coach here, you work on some things here you don’t get to work on in college … Overall, I thought it was a good week for myself.”

The development camp is one the Wild holds annually every summer for players in its prospect pool and players that they invite that hadn’t been drafted or are not already in the team’s minor league system.

Sheehy was an invitee to the development camp. Along with him was Robson, who isn’t in the Wild’s system. Sadek, though, was drafted by the Wild in the 7th round of the NHL Entry Draft in 2015. It is clear Sadek knows the routine of the development camps by now.

The Wild opened two scrimmages for the public to come to the the Xcel Energy Center and watch, one on Thursday and one on Sunday. Sunday, Sadek and Robson were teammates on the white team while Sheehy was on the green team.

Aside from those three, college hockey players familiar to the Gophers players participated. Two notable names — two who played at the same arena in the NCAA Frozen Four in April — were goaltender Hunter Shepard from the national championship-winning Minnesota-Duluth and Ohio State forward Mason Jobst.

When it comes to the Gophers players preparing for their upcoming season in October, they said the camp helped them work on routine and keeping the little things in mind.

“[It is the] little stuff I can work on,” Sheehy said. “Some little drills if I’m out on the ice by myself. I don’t know how much I can take back to the team here at [Minnesota], but I thought the drills and things like that were some good, key points to work on.”

Robson had one experience with him through the camp that was a first: vision testing and eye training.

He said the goaltending coach Frederic Chabot took the goalies to a hockey training facility to go through tests and training for their vision and how their eyes could track things and react quickly to situations.

“[Some of the tests were] how quick your eyes can pick up on something, how quickly they can process information, reaction times, how quickly you can move your eyes inward to something coming at you,” Robson said. “It was a really cool experience and I’m definitely going to try and keep that up.”

Each of the players steps into an increasingly elevated role for the Gophers next season. Sheehy starts his second season as team captain. Sadek will be the only senior on the defensive corps. Robson will have his first full season of eligibility with the Gophers and compete for a starting spot in net.

Now as they prepare themselves for the next season, they also have a new head coach in Bob Motzko. Sheehy said he expects Motzko and new assistant coach Garrett Raboin will be supportive of him and the team this season.