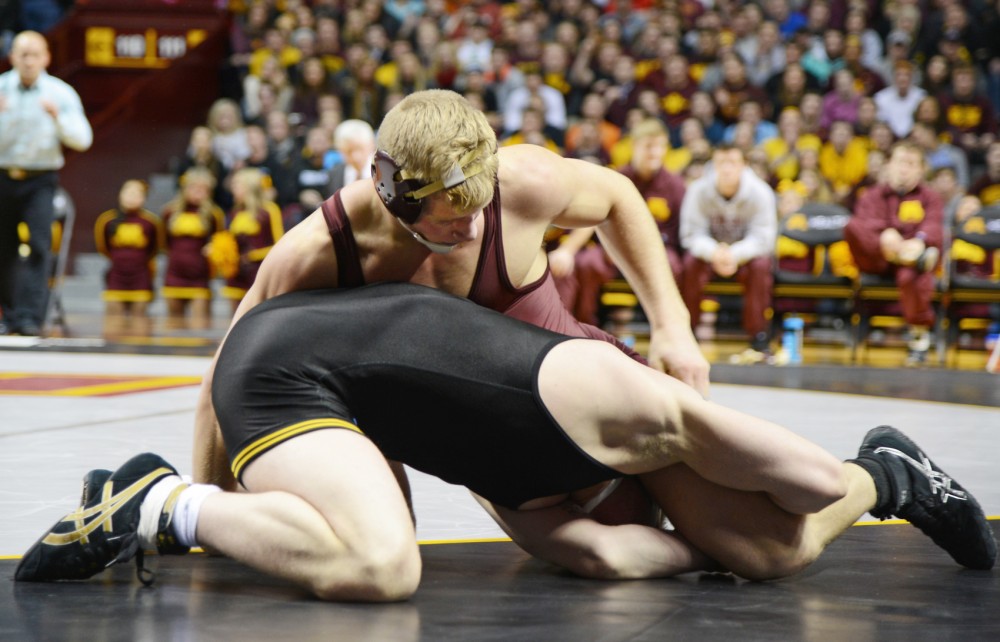 Brett Pfarr wrestles during his match in Williams Arena on Jan. 30, where the Gophers competed against the Iowa Hawkeyes.

by Jack White
Minnesota got its season off to a good start on Saturday, going 3-0 at the Gopher Duals.
The team defeated Grand Canyon 31-3, Virginia University 19-15 and South Dakota State 20-13.
“We made some progress today,” head coach J Robinson said. “What we need to do is build on what we learned today. We lost some close ones; we won some close ones, and that’s always what you do at the beginning of the year, and what we’re trying to do is find out where we are.”
Minnesota defeated Grand Canyon at every weight class besides 131 pounds. But the Gophers ran into a tougher matchup against Virginia.
Redshirt freshman Skyler Petry got Minnesota out to a 3-0 start, but after that, Virginia won four out of the next seven matches to take a 15-13 lead with two matches remaining.
Redshirt junior Brett Pfarr faced off against redshirt senior Zach Nye of Virginia at 197 pounds in the second-to-last match, and a key takedown in the closing minutes allowed him to win 7-4.
“It was a pretty close match,” Pfarr said. “I didn’t know much about Nye going into this. You know I’m new to [197 pounds]. There were a lot of good scrambles and things like
that, and I just wanted to make sure I kept wrestling.”
Redshirt junior Michael Kroells was Minnesota’s heavyweight wrestler, and he finished off redshirt senior Patrick Gillen in the final match to seal the victory for the Gophers.
Minnesota’s third contest against South Dakota State was also close. South Dakota State lost the first three matches but then won three in a row to take a 10-9 lead.
Minnesota trailed with two matches remaining again, but Pfarr and Kroells both ended with major decisions to give the Gophers a 20-13 victory.
“I think the thing is to be able to keep that focus three matches in a row, and that’s the thing that we’re trying to do is to get them to realize that their focus has to be brought every time they wrestle,” Robinson said.
Petry went 3-0 at 125 pounds in his first-ever dual meet.
“I really need to start smothering guys a little bit more,” Petry said. “[The coaches have] been telling me that a lot — just staying calm before matches. My first match I almost
wore myself out because I was a little nervous, first home dual on varsity. That’s just something I need to keep in mind. I won’t be as tired if I’m a little more relaxed before the match.”
Robinson said the team needs to continue to bring intensity as they compete throughout the season.
“It’s a good place to start from,” Robinson said.
Delete Image
Align Left
Align Center
Align Right
Align Left
Align Center
Delete Heading