Minnesota endured its first loss of the season at Bemidji State Saturday. 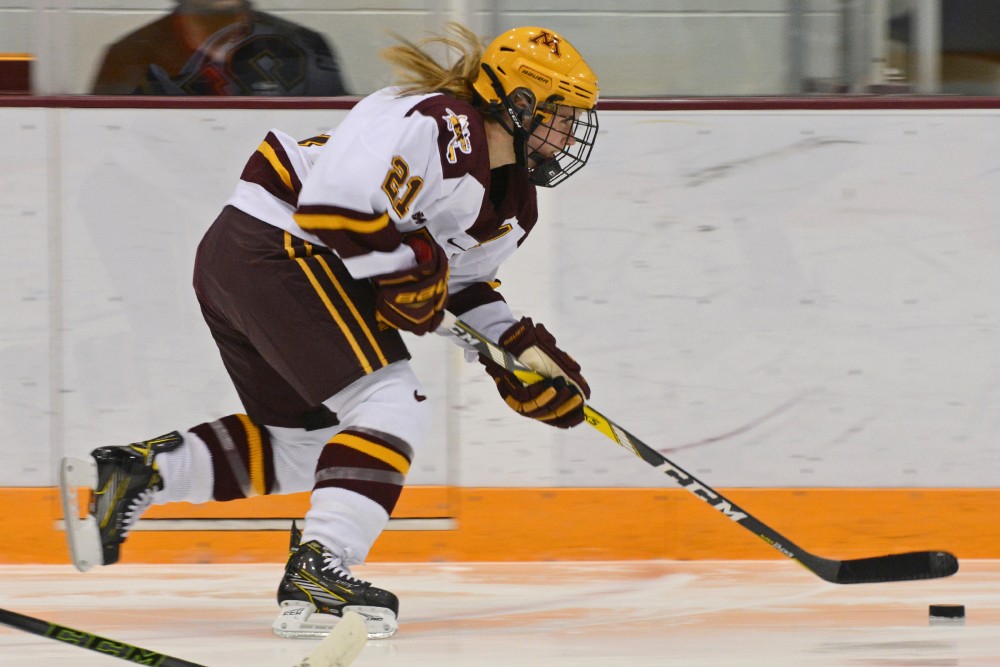 The Gophers emerged with a series split that was nothing short of eventful as they hit the road for the first time this season over the weekend.

Minnesota forged a fierce third period comeback to defeat Bemidji State 3-1 Friday, but fell to the Beavers 2-0 in its first loss of its season in Saturday’s series finale.

“The win last night and our seniors stepping up meant a lot for us,” said head coach Brad Frost. “[Saturday], we unfortunately were unable to get the equalizer all game, and when you don’t score a goal it’s hard to win. Credit to Bemidji for blocking a lot of shots and some timely goals.”

Neither team scored in the first two periods of the first game, but the Gophers found themselves in trouble quickly in the third period.

Bemidji State (3-1, 1-1 WCHA) scored the first goal of the game during a five-on-three advantage with 14 minutes left in the game.

The No. 2 Gophers (3-1, 1-1 WCHA) found senior forward Dani Cameranesi, who took charge and pulled a victory from the what looked to be a defeat.

Cameranesi scored two goals in less than three minutes to give Minnesota a lead. Junior forward Caitlin Reilly followed with another for the Gophers to come away with a 3-1 victory.

“It was a good job by our upperclassmen to lead us and get us those goals,” Frost said.

The Gophers came into the second game looking to head home with a sweep, but the Beavers had other things in mind.

Bemidji State got the early advantage it couldn’t the night before and scored about one minute into the game.

The Gophers outshot the Beavers 16-4 in the second period but could not find the back of the net and Bemidji held the lead.

The Gophers pulled the goalie late in the third period looking for the equalizing goal, but instead saw an empty-net goal that sealed the 2-0 loss for Minnesota.

Peters had 17 saves, but Minnesota faced a tough Bemidji offense and goaltender that staved off 31 shots.

“I felt like it was a good game and we battled really hard,” Cameranesi said. “Obviously it’s hard to play on the road for the first time — especially against Bemidji — but they played a good game.”

A loss this early in the season is somewhat uncharacteristic for the Gophers. The team won nine consecutive games last season before suffering its first loss in late October.

Minnesota will have its chance at redemption in front of a home crowd this weekend against rival and fellow WCHA member, No. 6 Minnesota-Duluth.

“We just need to find some ugly goals, and win the 50-50 battles,” said senior defenseman Lee Stecklein. “That will give us the edge in games.”