U entrepreneur is spending his summer searching for hip-hop talent. 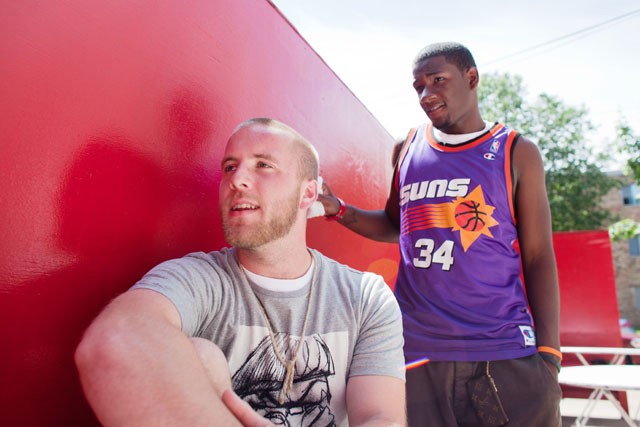 Jake Heinitz doesnâÄôt have a home this summer.

When the University of Minnesota business student wants to sleep in Minneapolis, he stays in his parentsâÄô basement.

But Heinitz wonâÄôt spend much time with mom and dad as he travels solo around the country, meeting musician after musician and networking for his growing record company.

Like many college students, Heinitz, 21, struggled to find a suitable major at the University, and explored fields from psychology to advertising.

By his sophomore year, Heinitz asked himself, âÄúWhat do I love, what do I really love?âÄù

Niles Miller, 21, HeinitzâÄôs friend from high school and budding musician, needed someone to represent him in the music scene, so Heinitz had the idea to start a record label.

Heinitz met Matt Carter from local hip-hop group Duenday in the University residence halls, contacted local underground hip-hop star Big Zach from the group Kanser, and together the groups, including Miller, founded No Static Records in 2009.

âÄúHeâÄôs always been one of the most passionate dudes about music IâÄôve ever met,âÄù Carter said of Heinitz.

Heinitz said he never had the patience to learn music himself but that his strength is being able to create connections and network.

When Heinitz was 18, he lost one of his good friends in a motorcycle accident. This tragedy turned into his first experience with the music business, after he organized an outdoor memorial concert at the Normandale Lake Bandshell and got hip-hop artists Kanser and Prof to perform for free.

Miller said he and Heinitz used to write rhymes in high school, pass them back and forth during class and rap in the hallways.

With No Static, Heinitz said he wants to âÄúbring the positivity back to musicâÄù in Minneapolis.

Many talented musicians exist but they never want to help each other out, he said, and music shouldnâÄôt be a competition.

âÄúIf we could [grow] as a community of Minneapolis musicians, it would be insane, the things we could do.âÄù

Alex Everson, an assistant at MinneapolisâÄô Rhymesayers Entertainment, which represents artists Atmosphere and Brother Ali, said he thinks No Static will benefit the Minneapolis music scene.

âÄúEvery artist I put on No Static, I put on for a reason,âÄù he said. âÄúI believe they have something the public should hear.âÄù

Heinitz handles the press and promotional aspects of the business, booking shows and networking for his clients.

âÄúHeâÄôs done everything except make music,âÄù Carter from Duenday said.

The artists at No Static call themselves a family, connected by the idea of working together.

Miller said itâÄôs comforting to have people who give honest opinions about his music and act as a support group. âÄúWeâÄôre all starting from the same place and weâÄôre all working together,âÄù he said.

Heinitz is spending this summer traveling the country, establishing No Static as a brand name and networking. He wants to meet as many people as possible who can give him business advice, he said.

âÄúThis is a summer of planting seeds for No Static,âÄù he said. In each state he visits, Heinitz is interviewing different artists and posting his experiences on his music blog called Be Scene.

He said he believes there are a lot of artists who arenâÄôt getting the love they deserve, but with his trip, he hopes to bring up the best from the underground scene.

In each state he goes to, Heinitz will meet up with one musician, who will refer him to another and then another until heâÄôs traveled around that state. Then heâÄôll move on to the next state. âÄúI want to see how people are connected through music,âÄù he said.

Heinitz started his trip in June, traveling to New York where he met up with various hip-hop artists.

His next stops are Chicago, Los Angeles and Nashville.

To find artists before arriving to the state, Heinitz said he âÄúscoursâÄù websites and blogs to find artists who he thinks are underrated and deserve to be in the spotlight.

âÄúI believe in the artist that I represent so much that I want everybody around the country to know [them] too,âÄù he said.Â­Â­