Turnovers cost Minnesota as its upset bid comes up short

An interception, fumble and missed field goals were too much to overcome against No. 3 Ohio State 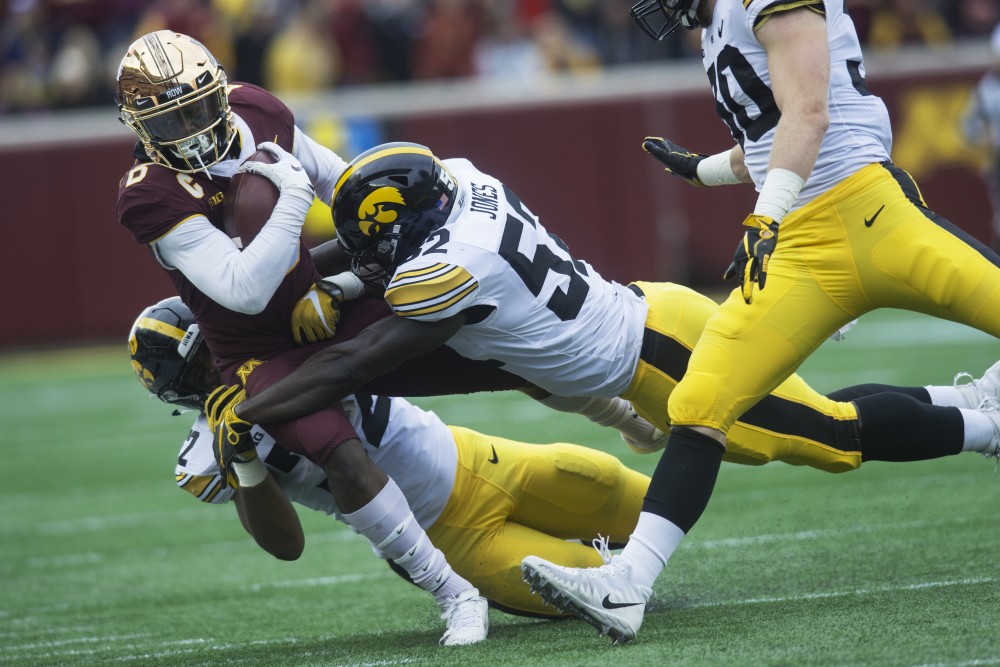 Wide receiver Tyler Johnson is tackled after a long run on Saturday, Oct. 6 at TCF Bank Stadium. The Hawkeyes defeated the Gophers 48-31.

On Saturday, the Gophers tried to do something they hadn’t done since Nov. 22, 2014: beat a ranked team.

On that November day in 2014, the Gophers took down No. 21 ranked Nebraska 28-24, and for much of Saturday’s game against No. 3 Ohio State, it looked like the Gophers had a chance do it again.

Coming into the game, the Gophers were 30-point underdogs, something the team had relished throughout the week. But at halftime Minnesota found themselves in a different position, as the team trailed the Buckeyes 17-14.

The running game was clicking on all cylinders, the offensive line was winning the battle in the trenches and Minnesota’s run defense was forcing Ohio State to be one-dimensional on offense.

However, the Gophers’ youth showed itself as the pressure mounted, the team made key mistakes on offense and special teams and Ohio State never looked back, beating the Gophers 30-14.

“When … the number three team in the country gives you nothing, you can’t give anything back, and we gave them three different opportunities to do it,” Fleck told reporters.

Midway through the second quarter, with Minnesota up 14-10 and driving down the field, it looked as if the Gophers were about to break open their lead.

Running back Mohamed Ibrahim started the drive with a 34-yard gain to put the Gophers into Ohio State territory, then quarterback Zack Annexstad connected with Tyler Johnson for a 21-yard gain. As Johnson fell to the ground, he lost the ball and the Buckeyes recovered.

“After [the fumble] happened, I knew I had to let it go and just go out there and continue to play.” Johnson told reporters.

On the ensuing possession, Ohio State quarterback Dwayne Haskins connected with K.J. Hill for a 36-yard touchdown, which gave Ohio State the lead 17-14.

The Buckeyes took that lead into halftime, with the Gophers still in good position to pull off an upset. However, their woes continued.

After Ohio State added a field goal to extend the lead to 20-14, the Gophers drove down into Ohio State territory again, this time getting to the Buckeye 14-yard line. Minnesota was unable to convert on 3rd down and was forced to attempt a field goal. Redshirt senior kicker Emmit Carpenter, who was eight of nine on the year, yanked the kick wide-right, resulting in an empty possession.

Once more, Ohio State responded with a field goal, giving it a two-possession lead, 23-14.

Knowing they needed to create offense, the Gophers went into their bag of tricks. The Gophers successfully completed a flea-flicker pass to Bryce Witham for 41 yards, marching into enemy territory with momentum on their side. On the next play, Annexstad threw a deep pass to Tyler Johnson toward the end zone, but he overthrew him just slightly into the waiting arms of Ohio State’s Isaiah Pryor.

On the next Minnesota possession, Carpenter missed his second field goal of the game, keeping Ohio State’s lead at nine, with 5:45 to play. It left Minnesota with too little time to get back in the game.

“We’ve got to be able to hit the field goals,” Fleck told reporters.

The Gophers will try to continue improving and look at the positives of this game. They held strong through the first half with the No. 3 team in the country on the road. The team moved the ball efficiently on offense and continued their strong run defense, but turnovers and missed field goals were too much to overcome.

“I thought our team played incredibly hard … the loss is 100 percent on me,” Fleck told reporters. “No moral victories whatsoever, ever in this program as long as I’m the head football coach.”