UMN students weigh in on the Trump impeachment inquiry

University of Minnesota students represent a wide variety of opinions about the recent impeachment inquiry. 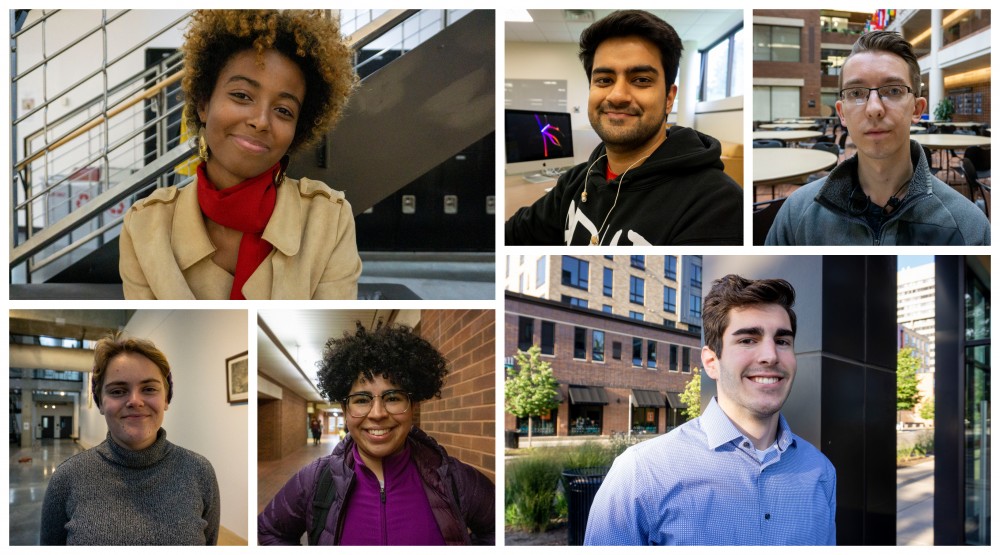 On Sept. 24, House Speaker Nancy Pelosi announced a formal impeachment inquiry of President Donald Trump. The inquiry is a response to President Trump’s liaison with the Ukrainian president regarding an investigation into possible corruption connected to Joe Biden. The Minnesota Daily reached out to students across campus and asked about their thoughts and feelings on the proceedings. “I think it’s kind of like about time that some action was taken for it. But at the same time it makes me nervous because, if it does go through, I don’t like Mike Pence any more than I like Trump. If anything I like him less than I like Trump. I think [impeachment is] more of a statement than any actual action being done. Which, I appreciate that statement, but I don’t think it really changes anything about like policy or like actual things that will be implemented.” “So they are moving forward as far as I know, but I’m not really behind it, as such, because I don’t think it’s going to accomplish anything, because we’re in the last leg of his current presidential run. Either way, if he does get [impeached it’s] going to be President Mike Pence, and I doubt it’s going to make that much of a difference this late in the presidential cycle. I feel like rather than going after him right now, the Democrats need to get their stuff together. They need to get behind the one person … who’s going to lead their elections next year.” “I think it’s very interesting just being that obviously this is something that they’ve had for a while, but you can’t go through with it until you know that you can exactly get him on those charges. I would say I’m very interested in it. I definitely don’t agree with Trump’s politics at all; I’m a hardcore Democrat … It’s just an indictment at the beginning. You have to be convicted by the Senate with a two-thirds majority to be actually thrown out of the presidency. So I think if anything they’ll be able to get him on the indictment of impeachment, but they won’t actually be able to fully carry it out … But yeah, [I’m] very interested, very excited.” “So Trump had a phone call with the Ukrainian leader, and he was trying to have a quid pro quo or he was like … just trying to dig up dirt on Biden because he’s like his biggest competitor for the election … I don’t really think he’s going to get impeached just because he’s just going to keep denying it and … everyone’s like, ‘oh like Trump needs to get impeached’ … obviously that would be good, maybe, but would it really? Because then Pence would be the guy and like, I don’t know if he would be a bigger competitor to other Dem. candidates.” “I’ve been so busy. I haven’t been able to keep up with it whatsoever … I am angry with him as a person. I think his dealings are really inappropriate. I don’t know what’s on about the actual terms of the impeachment though. I would be fine to see him go.” “[Trump] made more hate, you know what I mean? Like, I mean, I don’t support him in no way, shape or form but you know … but he made people hate each other. He caused problems. He caused division. So I mean, I am neither/nor a Democrat or Republican. I’m a free, independent thinker … It’s great news that he’s being impeached. We were in a dark time as a country, you know? It’s 2019, and it feels like this is a comedy, dark Comedy Central, [Saturday Night Live] … skit for too long. So yeah, Donald Trump: bye-bye. You’re never gonna come back. Bernie 2020.” “I know that the president had a call with the … president of Ukraine. And in that, he basically asked to have the Ukrainian government look into a corruption scandal involving Joe Biden. … He also publicly asked China and Ukraine again repeatedly to look into it. I think honestly … it’s basically like it’s expected at this point. I feel like it’s been kind of a habitual thing with this presidency, this administration. It’s been really chaotic, and this is kind of the culmination of it. It doesn’t really surprise me one bit, and I’m glad that it’s finally like the straw that broke the camel’s back, because I think that no matter what political party you are, I feel like for anybody really this kind of behavior is unacceptable. I support the impeachment inquiry.” “I feel that it’s definitely a corrupt action on Trump’s part. I don’t know constitutionally what would make him necessarily impeachable, but I do believe that he is unfit to lead. He was unfit to lead prior to this, and this just shows even further that he’s even more unfit to lead in that he’s focusing on trying to discredit one of his potential political rivals rather than actually solving problems within the United States and without … destabilizing our allies as well.” “For me as … a black woman from the Caribbean it was really like — I think it’s really telling that this is the incident that is pushing the Democrats to impeach Trump when there were so many other things that Nancy Pelosi and the Democrats could have moved forward with the Trump impeachment. You know, he said … and has done a number of racist, sexist things. He’s assaulted women, etc., etc. But those weren’t the things that people were pushing for, for impeachment at that time. It’s like, in this incident when Joe Biden becomes a part of the, you know, of the situation, then it’s like ‘okay, we need to like defend other people’ and so, like, in that incidents like it’s not — it doesn’t feel really genuine.” “I’ve read like 80 different articles on it just trying to put the pieces together … I think for me, the call coinciding with the aid, especially during an election year, I think that merits a reasonable investigation from Congress. I think, at best, it was a really bad gaffe on the part of the president to mention … [a] potential competitor in the 2020 race in a phone call for an investigation. At worst, it could be acting intentionally against the interest of the U.S. So I think right now is too early to say what’s going on. I think we’ll have to wait and see with cool heads, you know, just trying to get the facts of what was the intentions of the White House when they did this … I think that we should wait and see, because I do want to see more transparency on this, because it was really serious to mention a presidential competitor and asking for foreign aid … a sort of quid pro quo situation.” “I find it very hard to care a lot about it. Just because, you know, if it’s not one thing it’s another. There are a lot of really bad things that Trump has done since being president and the fact that like he’s putting people in cages and sort of preaching rule of law all over the place. The fact that like him investigating Joe Biden or pushing for an investigation of Joe Biden who’s a very powerful person himself is what sort of crosses the line is kind of like disheartening, you know? All these are the things that Trump has done that have been, like, incredibly racist and incredibly violent should have been enough to remove him from office. But obviously to the people running the impeachment campaign, it’s not and so in that sense, it’s like disappointing disheartening and it’s hard to sort of care.”