Minn. prepares for series with Mavericks

The Gophers hope to win a Friday game for just the second time this season. 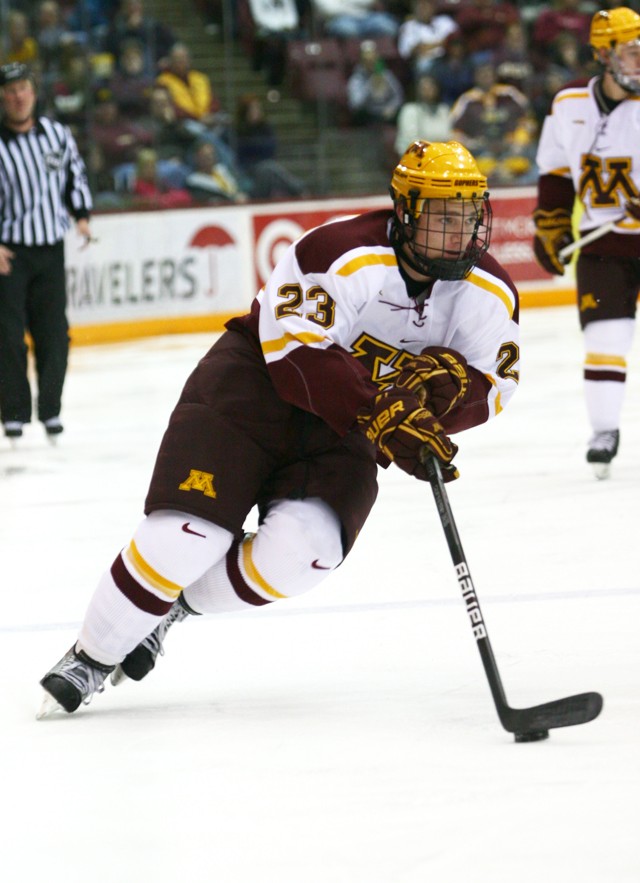 After splitting last weekendâÄôs College Hockey Showcase, the Minnesota menâÄôs hockey team will head back to the conference portion of their schedule as they round out the first half of the regular season. The Gophers (5-8-1, 3-5-1 Western Collegiate Hockey Association) will have a home-and-home series against Minnesota State-Mankato (6-7-1, 4-7-1 WCHA) beginning Friday at Mariucci. Last Friday, Minnesota suffered the worst loss of head coach Don LuciaâÄôs tenure, falling 6-0 to Michigan. Friday losses are nothing new to the Gophers this season, as they have a 1-5 record in Friday games on the year, with the lone win coming against Alaska-Anchorage in MinnesotaâÄôs only sweep of the season. Lucia knows that as his team approaches the halfway mark of the season, the squad has to start winning on both nights. âÄúWeâÄôve got to start stringing together successful weekends, not just successful nights,âÄù Lucia said. âÄúYou canâÄôt do that unless you win on Friday night; weâÄôve got to do everything we can to come out and play a real strong game at home on Friday.âÄù Playing at home has been one source of struggle for this yearâÄôs team. The Gophers enter the weekend with a 3-5 record at Mariucci Arena. The team did receive some good news this week, as freshman defenseman Nick Leddy is slated to return after missing the past month with a broken jaw and concussion. LeddyâÄôs return to the lineup will certainly help the current roster, which has just six healthy defensemen, and Lucia said he is excited for the heralded freshman to play again. âÄú[LeddyâÄôs] skating ability, his ability to make plays from an offensive standpoint, plus heâÄôs shown to be a very good defensive player so far early in his career,âÄù Lucia said. âÄúThereâÄôs no question that getting him backâÄôs going to make us a better team.âÄù For Leddy, the chance to play Friday night after missing nine games has been a moment heâÄôs been waiting for. âÄúIâÄôve been excited for a really long time,âÄù Leddy said. âÄúItâÄôll be good to get back on the ice and see where it takes me.âÄù While Minnesota adds Leddy, it will lose forward Jordan Schroeder for two games later in the month. The sophomore has been invited to join the United States for the World Junior Championships. While the current roster is preliminary with seven cuts to be made before competition begins Dec. 26, Schroeder is likely to make the final roster for the third consecutive year. The forward is MinnesotaâÄôs lone representative at the World Junior Championships, a stark contrast from years past when the Gophers routinely sent three or four members to the games. The lack of players participating at World Junior Championships is just fine with Lucia. âÄúCertainly from a selfish standpoint IâÄôm not shedding tears that weâÄôre only going to lose one guy,âÄù Lucia said. âÄúWeâÄôre happy for Jordan, we knew that was going to happen âÄ¦ With our depth and the amount of guys that we have right now, itâÄôs good that weâÄôre not losing anybody else.âÄù Schroeder is expected to miss the Dodge Holiday Classic but will return the following weekend for the series against Harvard. Against Minnesota State-Mankato, one of the stars of last weekendâÄôs series played himself into a likely starting spot this weekend. âÄúKent [Patterson ] started three games; heâÄôs played very well in three games heâÄôs started,âÄù Lucia said. âÄúHeâÄôs certainly earned the right to continue to play, and thereâÄôs a good chance heâÄôll play this weekend.âÄù The sophomore is following a career performance in last SaturdayâÄôs win against then-No. 8 Michigan State. Patterson notched his first career win after making a career-best 37 saves. Unfortunately for the Gophers, they will be facing a team that is riding a hot streak. The Mavericks have won three of their past four games, including a sweep last weekend over Michigan Tech. Minnesota State-Mankato has seen most of its success at home, as they are 5-3 when playing at the Alltel Center and 1-4-1 on the road. If Minnesota hopes to earn a sweep, they will have to find a way to avoid the bad bounces they faced in previous weekends. The best way to decrease the damage of bad bounces is simple; score more goals. âÄúIf youâÄôre not scoring many goals, you never create any separation in a game,âÄù Lucia said. âÄúI think thatâÄôs whatâÄôs hurt us, not being able to create enough separation in many games.âÄù Both games will have the regular 7:07 p.m. start, with FridayâÄôs game being held at Mariucci Arena and SaturdayâÄôs game being held at the Alltel Center in Mankato.