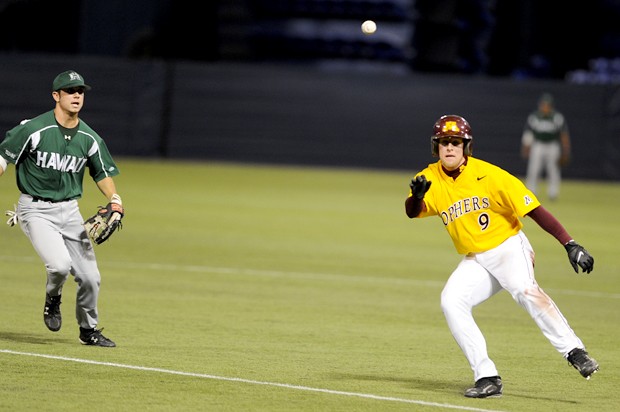 Recruiting athletes could be considered an art form. From finding top recruits to getting them to sign is a long process, but staying within the rules can be a balancing act. Recruiting is an ebb and flow-type process, menâÄôs coach Steve Plasencia s aid. âÄúIt changes in regards of where you are with signing and recruiting an athlete,âÄù Plasencia said. âÄúYou always have to work at it. ItâÄôs kind of a courting process.âÄù One thing that can help attract recruits is a top team. The Minnesota menâÄôs and womenâÄôs cross country and track and field teamsâÄô success in the past seasons doesnâÄôt hurt. With Big Ten conference titles and several top-15 NCAA finishers, Minnesota has an impressive track record. Plasencia starts looking for recruits during their sophomore and junior years of high school. He said he does have to be careful to comply with all the rules regarding recruiting. âÄúInitially, we begin to follow athletes when they are sophomores or juniors in high school,âÄù Plasencia said. âÄúWe watch results but are careful not to contact them until the correct time.âÄù WomenâÄôs coach Matt Bingle said his favorite part of recruiting is watching the athletes compete. âÄúI like to get out and watch people run,âÄù he said. âÄúThe next part is trying to convince them that [Minnesota] is right for them.âÄù Coaches canâÄôt contact athletes at all before their junior year, except for sending an athlete a questionnaire. After Sept. 1 of the junior year, a coach can send letters. A coach can contact the athlete by phone after July 1st of the athleteâÄôs junior year. During the senior year is when more correspondence and an official visit are allowed. Both teams also look at the athlete from an academic perspective as well as work ethic, who the athlete is as a person and their mental toughness, not just the athleteâÄôs talent when looking at a recruit, Bingle said. âÄúWe look for those qualities in every event,âÄù Bingle said. Next fall, 17 female student-athletes will join the womenâÄôs teams. Eight are from Minnesota, six from Wisconsin, one from Nebraska, one from Trinidad and one from the British Virgin Islands. Bingle said he wants to get the top athletes from Minnesota every year and feels there is a lot of home-grown talent. Once committed, the new recruits will be depended on to fill some impressive shoes. âÄúSince we are graduating quite a number of our elite athletes it was crucial we reloaded with an excellent class of middle distance and distance runners,âÄù womenâÄôs cross country coach Gary Wilson said . âÄúWe feel we have more than accomplished that goal, which is very exciting for the future.âÄù But once the recruits are signed, the recruiting doesnâÄôt stop. âÄúItâÄôs nonstop, all the time,âÄù Bingle said. âÄúIf youâÄôre going to have a great team, youâÄôve got to start early.âÄù