To beard or not to beard

Minnesota bearders have a serious rep. 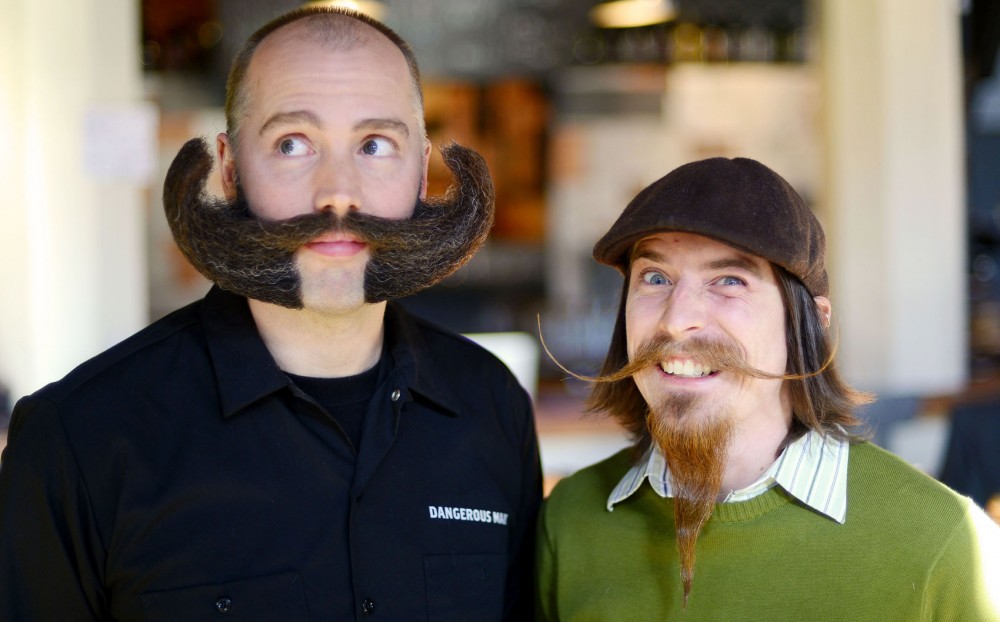 Michael "MJ" Johnson, founder of the Minneapolis Beard and Mustache Club, and Chris Sorensen, Media Coordinator for the MBMC, at Dangerous Man Brewing Company in Northeast on Wednesday.

Michael “MJ” Johnson’s imperial partial beard protrudes from his face like two dark-brown, upside-down walrus tusks. The thick, coarse hair starts at his jowls and connects to his mustache before curving up near his eyes.

In early November, his elaborate facial ’do won second place in the Imperial Partial Beard category at the World Beard and Moustache Championships in Germany.

Here in Minneapolis, the beard and mustache community is also thickening, thanks in part to popular events like “No Shave November,” local bearding competitions and an upcoming photography book about men and their beards.

But the cultural craze didn’t originate in this state chock-full of bohemian dandies. Other states have prominent mustache and beard groups and host some of the biggest competitions in the country.

Johnson founded the Minneapolis Beard and Moustache Club two years ago after he saw photos of the beard-growing world champion. He said he was surprised to learn this type of competition exists.

Inspired by the photos, he participated in a competition in Austin, Texas, that included the lead singer of ZZ Top on its judges panel.

“It was one of the best parties with the best people,” Johnson said.

He wanted to recreate that environment in Minneapolis, so he started his own club.

He was the only member when he first started the club on Facebook, so he added his wife, sister and mom. Now the group is a hair away from 500 members, “and it’s not just people adding their moms,” Johnson said.

Core group members, who stand out with their elaborate and well-manicured facial locks, meet about once a month at Dangerous Man Brewing, the group’s official sponsor.

“A lot of people think that the only thing you can do with a full beard is just let it grow,” Johnson said. “That’s so far wrong, it’s incredible.”

Last week’s meeting focused on styling tips from the pros. Johnson and Chris Sorensen, the group’s media coordinator, brought specialty mustache wax, combs, hair spray and mirrors to the brewery. They did demonstrations and helped others groom their whiskers while knocking back a few beers.

Conversation centers mainly on the technicalities of growing different styles, but it sometimes slips into beard philosophy.

“Why, when you walk by somebody else with a beard, do you nod at each other? Why is it that when I go out, strangers will come up to me and compliment my beard? Why is it a bonding thing? Even if you’re a part of a club, you don’t have all the answers,” Johnson said.

Another topic of heavy debate is the inherent politics of the competitions.

“Everybody wants to be the star. When there’re beard contests and somebody doesn’t win and they think they got cheated or something, it’s on!” Johnson said. “They get sad, mad, a broken heart, de-friend people. In general, most people you meet are awesome, but there’s more turbulence than I was expecting.”

Several of the men in the group also posed for local photographer Joseph D.R. OLeary’s new book, “Of Beards and Men: A Portrait of Man.” OLeary started the project two years ago, before mustaches and beards became a trend.

The book features men with various beard and mustache styles posing with a prop or in an outfit they selected themselves. OLeary said about 90 percent of the men are from Minnesota.

“What I truly appreciate about the book is that [OLeary] captures each individual’s personality beyond their beard. He’s able to portray our various interests beyond our beards,” said Charles Awad, who also posed in the book but isn’t a member of the club.

OLeary started a Kickstarter campaign to fund the project, raising 150 percent of his goal between July and August. Since then, media outlets and publications from England, Spain, Italy, Germany, Russia, Australia and the Netherlands have contacted him for interviews.

Awad said he’s been sporting a beard for the last few years, before facial hair became as socially and professionally acceptable as it is today.

“A decade ago, no one would have complimented my beard,” he said. “They would’ve been like, ‘Shave! You look like a lumberjack.’”

A downside to the growth in facial hair’s popularity is it can project an unwanted stereotype, Awad said.

“Sometimes beards are identified with hipsters,” he said. “I hear the term ‘neck beard’ sometimes, and I’m like, ‘No, I’m just a guy with a beard. I don’t associate with a type of individual just because I have facial hair.’”

For the men in the mustache group, however, the camaraderie is perhaps the best part of the experience.

“At the start of it, it was all about individuality, like what kind of beard am I going to grow for me,” Johnson said. “But then you go to the contest and meetings or meet people in other cities and countries, and you quickly realize that bearding is about people and adventure.”