In his sixth Q&A with the MN Daily, Mark Coyle talked about his first year on the job and the future of Gophers athletics. 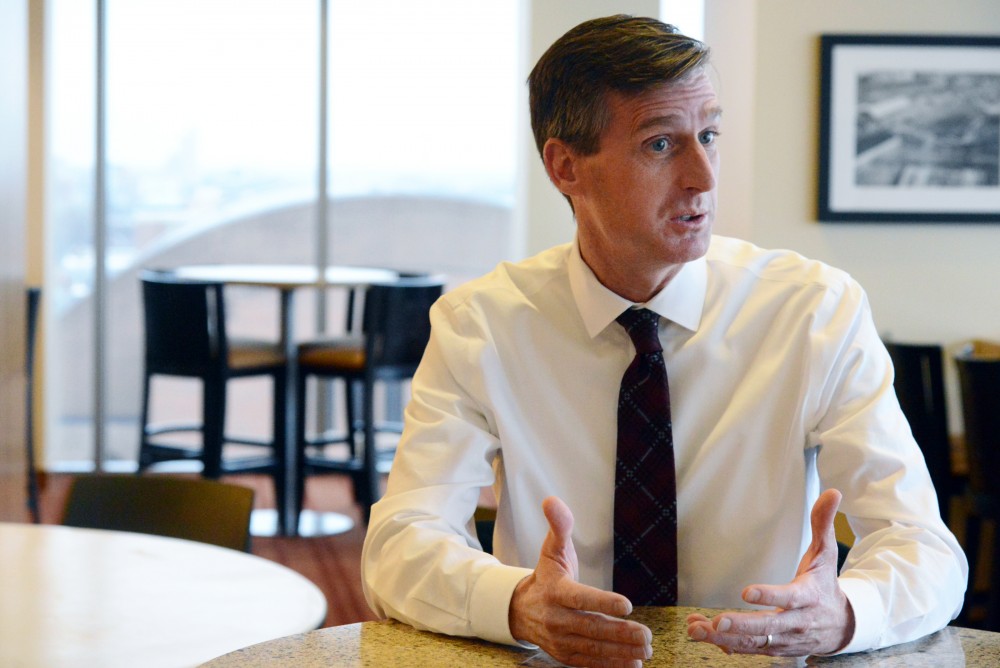 Athletics Director Mark Coyle sat down with the Minnesota Daily for his sixth Q&A, and last of the semester.

Coyle discussed the softball team’s success, his first year on the job and the future of the athletics department.

How do you feel about the state of the softball program?

It’s amazing. Coach [Jessica] Allister and that program have done so much. I can tell you I’ve really gotten to enjoy spending time with Jessica. She makes no excuses. … I think you see that in her team. Obviously, what Kendyl [Lindaman] is doing as a freshman with the home run record … [is] incredible to see … We set a record this past weekend. I think it was just under 1,400 fans … We’re so thankful for the community really embracing that program …

What about the future of the program?

The baseball team is having a strong season as well, what’s it like to have two strong spring sports?

First off, coach [John] Anderson is a legend. 36 years. He’s probably one of the most respected baseball coaches in the country … People thought and understood that we’d be pretty good, and there’s a lot of questions about pitching and what we do there, and now we’ve had good pitching this year. That’s a credit to John and his coaching staff. Most importantly, that’s a credit to those young men on that team.

It’s almost been a year since you were named AD, how would you grade your first year?

I would ask you to ask my staff how they would grade my first year. I can tell you what I love about being athletic director is you learn every day. You have an opportunity to impact people in a positive way. I can tell you I’m thankful to be here. I’m excited about the future … I’ve really enjoyed working with the staff and the students and coaches.

On the list of things you wanted to accomplish in your first year, do you think you’ve met most of those?

There’s two things. If you go back to when I was hired, one thing I really talked about was trying to establish some consistency. I’m the fourth athletic director since 2012. I think we’ve had eight senior executive ADs transition out of here in the past four or five years. I’m hopeful that I’m providing consistency for our staff here … The second thing I talked about was a lot of listening. … We talk about making data-driven decisions. Those are two areas that I think we need to continue to do. We need to continue to provide consistency … We need to continue to listen. I also think, I’ve made it very clear; we didn’t come here to be .500. We want to compete at the highest level … We want to make sure we always compete, and compete at a high level.

Do you feel Gopher athletics is better now than when you first came here?

I don’t know if it’s fair for me to say it’s better or worse. What I do feel comfortable in saying is that I think people understand the direction of where we want to go. What I mean by that is, I’ve talked a lot about internally, we want to make sure we’re defined by our actions. We want to make sure we focus on honesty … We want to focus on transparency, and sometimes we can’t be transparent with the different issues we might be dealing with but we want to be as transparent and as accessible as we can … The last thing we talk about is being innovative. What I mean by that is, how do we maximize our resources? By resources, I don’t necessarily mean our finances, I mean our people resources and how do we get the best out of me and everybody else we work with …

Besides Athletes Village, what do you look at as the future of Gophers Athletics?

North Dakota recently had to cut a few of its programs. Do you envision that happening here?

We’ve not had any conversations. I think you always look at your sport offerings and you want to make sure you match what the state population is doing with high school sports and those types of things but we’ve had no conversations about that at all.

What do you want to improve on yourself, personally, in the future at the University?

After the boycott, how do you feel your relationship is with the football players?

Obviously, when we hired coach [P.J.] Fleck, [we] brought him in here to work closely with that team. Again, I’m thankful for our football team. I’ve had a chance to go to many practices, had a chance to go to the spring game. As you know, that team has been through a lot and the students on that team have been through a lot. … I’m thankful for how hard they’ve worked, academically and athletically. I’m thankful for the commitment they’ve shown coach Fleck. I want to do everything I can to support them and all other 24 teams that we have here.

Editor’s Note: This Q&A has been edited for clarity and length