Affected professional students can vote on the referendum until 8 a.m. Thursday. 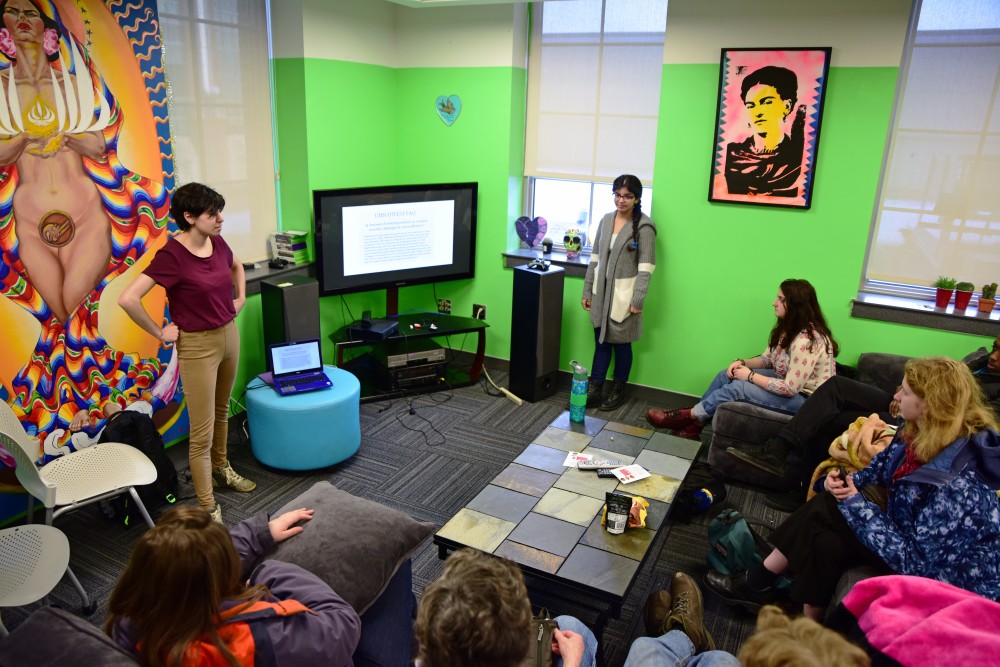 Members of Students for Justice in Palestine answer questions about divestment efforts during an event at the La Raza Student Cultural Center in Coffman Union on Wednesday, Feb. 28.

A voting extension was given to some professional students at the University of Minnesota after they were unable to vote on a controversial referendum in the all-campus elections.

Though voting in the all-campus elections opened Monday, professional students found the divestment referendum wasn’t included on their ballots.

The referendum, which received enough signatures to reach the ballot last week, calls for the University to cancel its investments into companies the referendum’s sponsors claim support the Israeli occupation of Palestine.

In response, the Professional Student Government filed an official complaint against the All Campus Election Commission Monday morning asking for professional students to be included in the vote, said Rachel Cardwell, president of PSG.

“Given that PSG represents over 12,000 students, we should have been included on this referendum, or at minimum given some notification of this exclusion and an opportunity to be heard,” the complaint said.

University policy lets the sponsors of referendums decide which groups of students can vote on it. The request asked for all undergraduate and graduate students to be given the ballot, but not professional students, said Maria Versteeg, communications commissioner for ACEC.

The ACEC reviewed the complaint Monday and its seven student commissioners voted on a response, Versteeg said. Around 5 p.m., the group told PSG of its decision to allow professional students to vote and to give students who already cast their ballots an extension until 8 a.m. Thursday — after the original Wednesday deadline.

“ACEC does reserve the right to make any decisions regarding the election,” Versteeg said.

PSG accepted the resolution, but hopes to talk with ACEC to prevent similar instances in the future.

“We’re very happy with the resolution of this … [but] I think that we should sit down and have a conversation about the process in which professional students were excluded from this to begin with,” Cardwell said.

In a Monday night email from Cardwell to ACEC, she clarified that PSG was unhappy with the lack of clarity in the email sent to the affected professional students and the inclusion of two ballots instead of one for those students, citing inequality between them and other students who received one ballot.

The ACEC is unsure why Students for Justice in Palestine, the referendum’s sponsor, excluded professional students from voting in the referendum, Versteeg said.