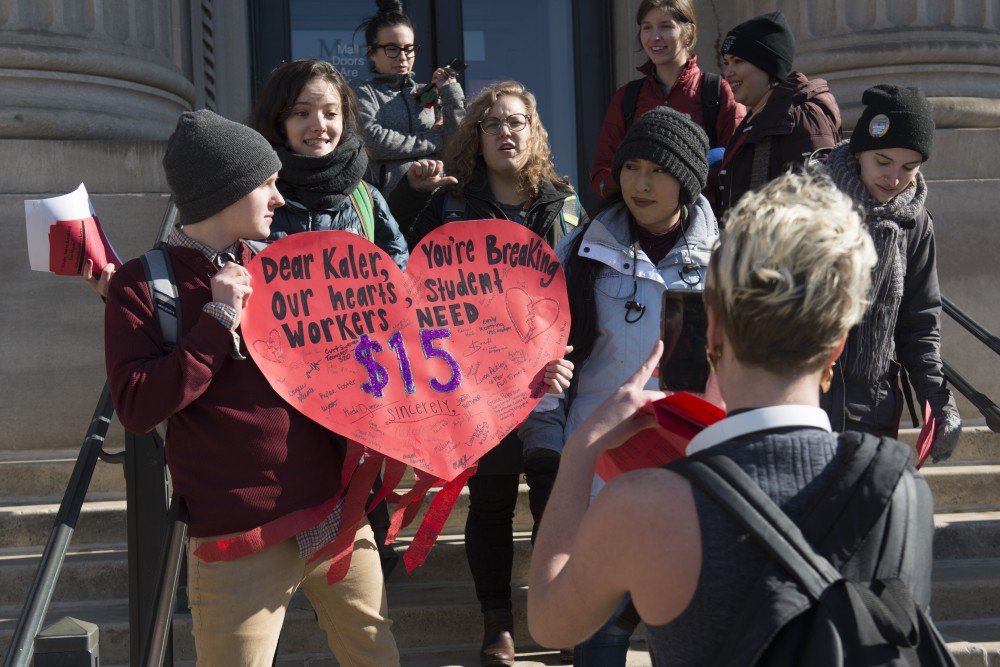 Members of the 15 for Student Workers group sing outside of Morril Hall on Wednesday, Feb. 14. Two students were eventually let in to deliver the large valentine card the group the created to University President Eric Kaler.

Around 20 students gathered at the west entrance of the University of Minnesota’s Morrill Hall Wednesday afternoon to sing songs, sign valentines and advocate for a $15 minimum wage for University student workers.

Though the students attempted to march into President Eric Kaler’s office, they were barred from entering Morrill Hall by police officers. Only two students were allowed to speak with administrators about implementing higher wages.

The student group was joined by members of Teamsters Local 320, who unionized last month for $15 minimum wage for all nonstudent University workers.

Christopher Mann, a sophomore studying political science, was one of the two students who was allowed to enter and speak to administrators.

Mann said Wednesday’s conversation was the third time he has discussed increasing wages for student workers with administration and feels the University is more concerned about its reputation.

In each conversation he has had with the University, officials said the road to $15 is an ongoing process, but it shouldn’t come at the expense of the students, Mann said.

“The reality is, students are hurting right now,” he said. “People every week struggle to find food, and President Kaler and his administration fail to feel that urgency.”

Teamsters Vice President Curt Swenson said he disagrees with the fact that University students are excluded from the fight for $15, which is why he came out to protest.

“It’s just greed and not wanting to give the students a fair wage,” Swenson said.

For many University students, campus jobs are necessary for completing a college degree.

Sociology senior Grace Peterson said she works three campus jobs and one off-campus job — a total of 35 hours a week.

Peterson said there’s a stereotype that student workers are only looking for job experience, but she added that’s not true for all students.

The protest lasted for about 40 minutes. University of Minnesota Police officer Joshua Betts said he was sent to monitor security at the building Wednesday afternoon, but wasn’t given details of the situation.