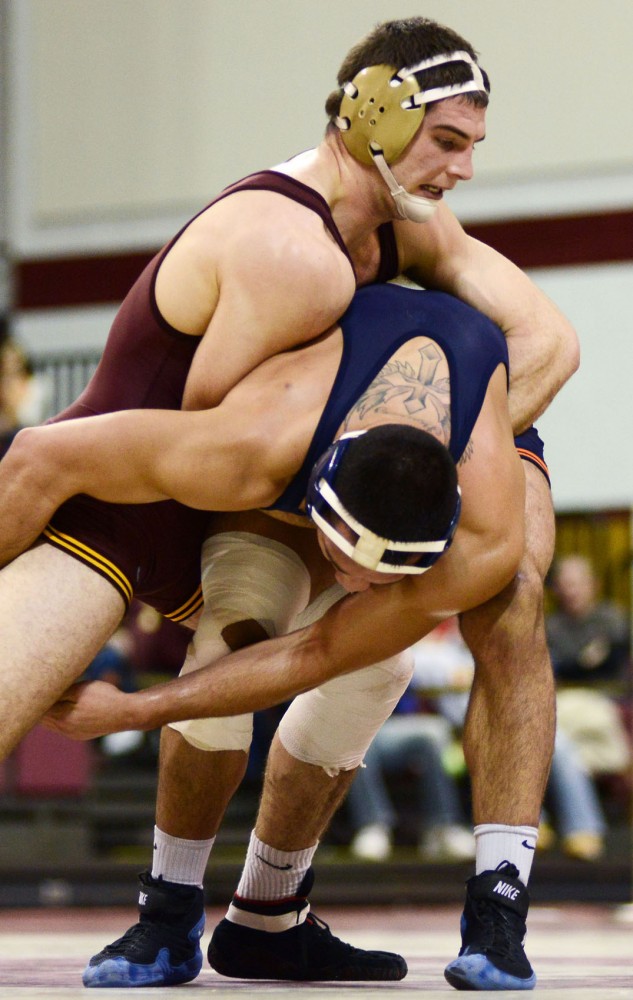 Gophers wrestler Scott Schiller was a 4-year-old and had just lost his first match. He was sitting in his father’s lap sobbing when another dad asked if Scott would wrestle his son.

He won the match, kept wrestling and went on to become a three-time North Dakota state champion.

“He experienced the trials and tribulations of wrestling in a very quick way,” said Scott’s father, Brad Schiller. “And he was hooked.”

Nearly 20 years later, Schiller is making a name for himself at the collegiate level as a Gophers redshirt junior.

He beat the top-ranked 197-pound wrestler last Saturday and assumed the No. 1 ranking in the class.

“It felt good to get that win,” he said. “But at the same time, it was expected.”

His teammates and coaches echoed that sentiment.

“I said ‘Congrats’ but didn’t want it to sound like it was that big of a deal,” Schiller’s roommate and teammate Seth Lange said. “We kind of know that it’s expected of him.”

He wrestled predominantly on the junior varsity team that season, but injuries to the team’s top 135-pound wrestlers bumped him into a starting role on varsity.

Schiller wound up making the North Dakota state tournament at 135 pounds that year, despite wrestling against older kids.

He didn’t win, but he recorded a consolation-round pin that helped the team to a state championship.

“Even though he was getting beat, it didn’t bother him,” Brad Schiller said. “He just knew that he had to get better.”

Schiller went on to become West Fargo’s first three-time state champion, posting a 43-0 record his senior year. He was also a two-time all-state linebacker on the West Fargo football team.

“Every coach said the same thing: that he was going to succeed in college because of his work ethic and determination,” West Fargo wrestling coach Kayle Dangerud said.

“He’s a super-hard worker, and that’s what it takes,” Saxlund said. “I tried to instill that in him.”

Schiller waited until the spring of his senior year to choose a college and picked Minnesota over offers from Nebraska, Oregon State, Northern Iowa and North Dakota State.

He redshirted the 2010-11 season and spent his redshirt freshman season behind All-American Sonny Yohn at 197 pounds.

“Obviously, it wasn’t very fun not starting,” Schiller said, “but it was a great learning experience.”

Schiller compiled a 26-4 record competing in mostly open tournaments as a redshirt freshman.

He cracked the starting lineup last season as a redshirt sophomore and compiled a 29-6 record, finishing fifth at the NCAA championships and earning All-America honors.

His teammates voted him the most dedicated wrestler on the squad.

Schiller is 12-0 this season and will face the 10th-ranked 197-pound wrestler this Saturday at Oklahoma State.

“Just having the partners is the key to our success,” Schiller said. “Wrestling with someone like that every single day, you’re going to learn.”

Those who know him well said he’s earned his success through hard work and dedication.

“Scott’s never been particularly fast or strong, but he’s been very, very focused on completing all those things, so he is a stronger athlete,” Brad Schiller said. “Nobody else practices as hard as he does.”