The University of Minnesota is the only publicly-owned university in the Big Ten to hire an outside company for its food services. 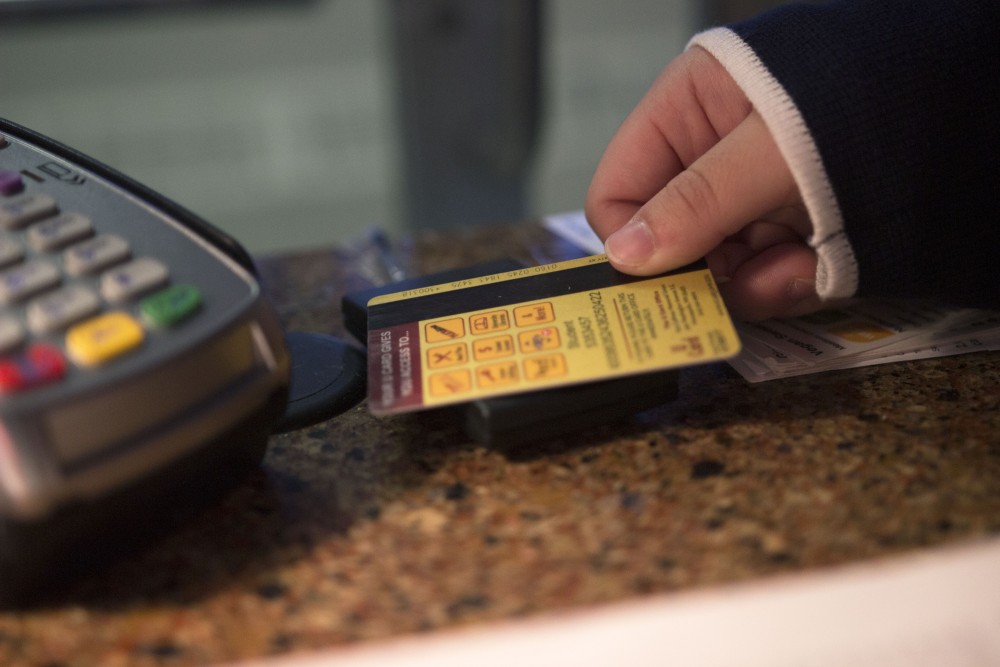 Jinghui Zhou of University Dining Services swipes in a student for dinner at Bailey Hall on Tuesday, Jan. 23.

After years of student complaints about the University of Minnesota’s dining service, the administration is taking the next steps in deciding whether to continue its more than 20-year relationship with Aramark, the University’s food contractor.

The contract, signed by the University in 2008, will expire on June 30, 2020. The Board of Regents discussed the future of the University’s dining service at its Sept. 12 meeting and deliberated over extending the contract for up to two years. During that time, the administration would consider potential proposals from different, external dining companies or create a draft to self-operate its food services.

Prior to 1998, the University’s dining services were self-operated ⁠— like all other publicly owned Big Ten schools today. The University broke from that tradition, signing a 10-year contract with Aramark which they renewed for an additional 12 years.

Although Aramark has worked closely with the University for more than two decades, many students argue that Aramark does not provide adequate services and are pushing the University to seek out alternative food service options.

In 2016, the Minnesota Student Association conducted surveys about food quality and found many students were not satisfied.Out of the 2,089 respondents, 57 percent said they felt the food was “not of high enough quality,” according to the survey. Additionally, 61 percent of respondents said the food was too expensive.

MSA has also said the company does not provide enough options for those with dietary restrictions, like halal and kosher food.

“Aramark just simply hasn’t done its service to the student body,” said MSA President Mina Kian. “Not only is it a highly unethical company that doesn’t reflect the values of our institution, it also has failed to service our diverse communities that are utilizing all of our dining service. Honestly, if I had to give them a grade, I’d give them an F.”

Both the Council of Graduate Students and Professional Student Government said they have been involved in dining services discussions as well.

“We need to make sure that someone is not compromising our nutrition for their profit,” COGS President Kriti Agarwal said.

With the June 30, 2020 deadline fast approaching, some regents said they wondered why the conversations around renewing the Aramark contract only started now.

“I feel like this process should be ending now, not starting now,” said Regent Mike Kenyanya. “This was a 12-year contract … we should be making our decision, not needing to extend and then therefore go through this process.”

“I will support a robust process for ensuring that students have an opportunity to provide a lot of input into the operation,” Rosha said at the Sept. 12 board meeting.

In 2015, the state of Michigan terminated its contract with the company after multiple news outlets reported unsafe working conditions and food quality within correctional facilities that used Aramark’s services. According to reports, prison officials and inmates allegedly found maggots in kitchens and one individual allegedly found rocks in his food, among other concerns.

Aramark was named one of “2015’s World’s Most Ethical Companies” by the Ethisphere Institute, a title it won multiple times before. Fortune magazine included Aramark on its 2016 list of the “World’s Most Admired Companies.”

In a statement to the Minnesota Daily, Aramark said it hopes to continue its relationship with the University.

“Aramark has proudly served the University of Minnesota – Twin Cities campus community for 20 years. … As a part of the campus community, we embrace our shared responsibility to promote an atmosphere where students can flourish through creating diverse dining environments that celebrate differences,” the statement reads.

Aramark also assured it works with students and the University to “provide a quality food service program on campus.”

The statement named several organizations it works with to “develop recipes, trainings and also maintain … standards.” These include the Humane Society of the United States and the Halal Food Standards Alliance of America.

Gavin Schuster and Zoe Keck, both first year students living in Middlebrook Hall, expressed that the food “could be better, but it could be a lot worse.”

At Coffman Union, Diba Dehmeshki, a graduate student who comes to Coffman once a week for Chick-Fil-A sandwiches, said, “I think the food is pretty consistent. … I don’t have any issues with the food.”

The University will likely make a decision about the approximately two-year contract extension at the October board meeting, said Mike Berthelsen, vice president of University Services.

Berthelsen said administration will be seeking the University community’s input by creating a website containing online polls and surveys, as well as conducting focus groups.

If the board approves the extension, administration will recommend in the fall of 2020 a new contract with Aramark, a contract with a different food service provider or a transition plan for self-operation.

There is no “clear plan B” if the extension is not approved, Berthelsen said.

“We are open to whatever solution, Aramark or another vendor or the University self-providing it, that can best deliver those outcomes,” Berthelsen said.