Tuesday marks the official beginning of the 2012 election process in the state. 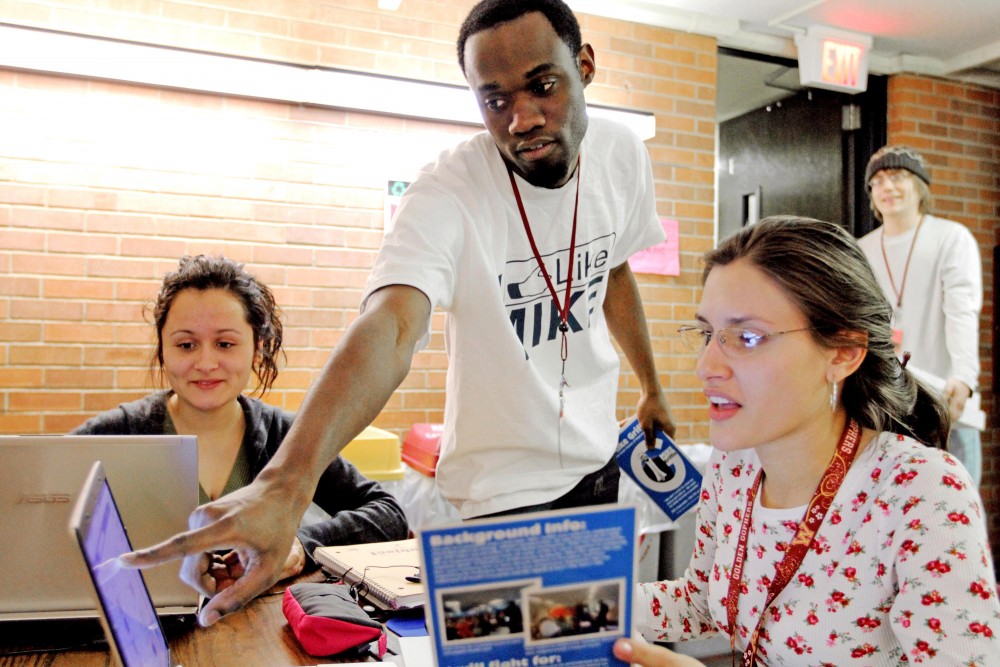 Mike Griffin, center, tells Paula Alvarez and Maria Bustamante to "Like" him on Facebook on Wednesday evening during a "dorm storm" in Middlebrook Hall. Griffin is running against incumbent Rep. Phyllis Kahn for her District 59B seat.

Tuesday marks the official beginning of the election process in Minnesota with the precinct caucuses.

Precinct caucuses are held statewide and students, like all citizens, can get involved and demonstrate their preferences for everything from state lawmakers to presidential candidates. State representative hopeful Mike Griffin has been working to get those in the University of MinnesotaâÄôs district out to do just that.

After almost a year of campaigning, Griffin, a 26-year-old University graduate, will face his first test against the longstanding Rep. Phyllis Kahn for District 59B, which includes the University area.

While Griffin has some student support, some argue that KahnâÄôs decades of experience would be greatly missed if she were unseated.

Griffin has been campaigning heavily since last March. Tuesday night, he could receive his first taste of validation.

In the 13 Democratic-Farmer-Labor precincts throughout the district, Minnesotans will discuss issues for the party platform and, in GriffinâÄôs case, which candidates to endorse for the November general election.

But in order for Griffin to get on the ballot with the DFL endorsement in November, heâÄôll have to gain delegate support through TuesdayâÄôs precinct caucuses and several party conventions.

Griffin has enlisted 10 precinct organizers, seven staffers and 76 block captains âÄî the majority of whom are University students who have been working closely with Griffin to gain supporters.

Compared to Griffin, Kahn has been relatively quiet near campus but nonetheless said she has many dedicated supporters in the district. Kahn has received the DFL endorsement every year since 1974. She was first elected in 1972.

âÄúIâÄôve called some individual people, but not too many,âÄù Kahn said.

Because of the redistricting process this year, KahnâÄôs district could change slightly, and she said in redistricting years she prefers to wait until the new lines are drawn to start gathering supporters.

Nonetheless, Kahn has dedicated supporters like Paul Scheurer, a longtime Stadium Village resident and a precinct caucus chairman, that point to valuable work sheâÄôs done for the district.

Fourteen years ago, the University attempted to sell homes in the Stadium Village area to Cargill Inc. Scheurer said the residents in the area opposed the plan and, in turn, Kahn intervened and several homeowners were able to keep their homes.

âÄúPhyllis Kahn was instrumental in making sure that we kept some homeowners in our neighborhood,âÄù Scheuer said, explaining his support for the incumbent.

Unlike the solid support base Kahn has, Griffin only started making a name for himself a year ago, which Barry Hickethier, a former district Senate candidate, said makes it more challenging for Griffin.

âÄúItâÄôs always easier as an incumbent. The challenger is finding people from scratch,âÄù Hickethier said.

But Griffin has resonated with students in the district, who said they see him often.

Jeremy Reichenberger, president of the College Democrats at the University of Minnesota, said he respects GriffinâÄôs visibility in the district.

Although the College Democrats arenâÄôt able to officially endorse a candidate, Reichenberger said he didnâÄôt think any members were Kahn supporters.

âÄúWe get people that have not put forth substantial policy that benefit the lives of students,âÄù he said.

But Griffin hasnâÄôt convinced the entire student base that heâÄôs the right choice.

Kahn refuted the claim that sheâÄôs not visible enough and suggested that some, including Griffin, had not attempted to work with the representative.

âÄúIn the past eight years, [Griffin] has never contacted me as a legislator,âÄù she said.

In order to secure enough delegates, Griffin will need support throughout the district. Based on Minnesota Secretary of State data from 2010, the district has 445 delegates, which could shift slightly after redistricting.

Griffin will need an outpouring of support in the caucuses in order to move forward to the conventions comfortably.

Hickethier, who has participated in precinct caucuses for years, stressed the importance of student involvement.

All students who will be able to vote in the general election in November can participate in precinct caucuses for either party and become a delegate. Delegates will go on to the Organizing Unit Convention in March.

At the end of the caucuses Tuesday, candidates will know how many delegates have been pledged to them. But with redistricting, itâÄôs possible some delegates could be shifted to another district.

Regardless of the level of participation, Hickethier said being part of a precinct caucus is worthwhile.