If certified as a class-action suit, all 200 people arrested will be plaintiffs in the suit against the city. 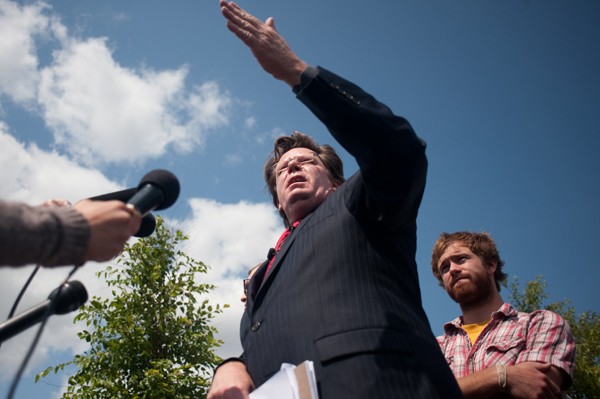 Attorney Bob Colstad speaks at a press conference Tuesday near downtown St.Paul as Reese Hagy, a plaintiff in the case, looks on. JULES AMEEL, THE MINNESOTA DAILY

Twenty-seven people arrested at the Republican National Convention last September filed a lawsuit in U.S. District Court Tuesday morning against the city of St. Paul for what the plaintiffs allege was a violation of their First and Fourth Amendment rights. On September 1, 2008, St. Paul police directed about 200 people âÄî some protesters and others trying to access a free concert on Harriet Island âÄî onto a piece of parkland along Shepard Road by the Mississippi River . Riot police arrested the entire group and detained many. The suit filed Tuesday states police arrested and jailed them without probable cause âÄî in some cases for up to 72 hours, Bob Kolstad, the attorney representing all 27 plaintiffs, said. Kolstad hopes for the suit to gain class-action status within a few months, he said. If certified as a class-action suit, all 200 people arrested will be plaintiffs in the suit against the city. One of the people in the suit, Vain Mainstream, 23, was arrested and detained for three days by St. Paul police at the RNC, but was never charged with a crime. As a result he lost his full-time job, he said. âÄú[Police] told me if I cooperated I would get an early release,âÄù Mainstream said. âÄúI told them I knew nothing about solidarity, and that I was a conservative. I was still there for three days.âÄù Mainstream âÄî who legally changed his name in July 2008 âÄî was initially charged with felony rioting and unlawful assembly, but the charges were eventually dropped. Mainstream said he is only seeking an apology from the city. âÄúIf I receive any money from the suit I will be happy to donate it to charity,âÄù he said. Mainstream said he would donate the money to a media preservation fund. The plaintiffs are seeking money for damages, but will not know how much for about a year, Kolstad said. âÄúThere were several groups of people that were treated differently,âÄù Kolstad said. âÄúSome people were just detained here for three hours or so, some people were subjected to chemical weapons.âÄù The city of St. Paul will not have to pay litigation expenses out of pocket due to a $10 million liability policy the city took out in 2007 specifically for lawsuits. The Minneapolis-St. Paul host committee âÄî not taxpayers âÄîfunded the insurance policy, St. Paul city attorney John Choi said. Choi would not comment on the merits of the case because Lexington Insurance Company and its outside counsel will be providing the defense. Kolstad used the insurance policy as one of his arguing points. âÄúWe believe the fact that the city bought that insurance policy proves that they intended to violate peoplesâÄô civil rights to defend the city in a way they thought was acceptable,âÄù Kolstad said. Choi said the policy was necessary. âÄúNo city in America would host a national security event, a Super Bowl, or any other major event without this type of insurance,âÄù he said. âÄúThe key here isnâÄôt whether or not we had the insurance, but who paid for it.âÄù The city of St. Paul is reviewing the policies and will forward them to Lexington. It is too early to know whether the city will take the suit to trial or settle with the plaintiffs, Choi said. Kolstad said the case is necessary to prevent future civil rights abuses by the government. âÄúThe government now believes that they can come to our houses and arrest us because they think that we might do something wrong,âÄù Kolstad said. âÄúOur constitution simply doesnâÄôt permit that.âÄù