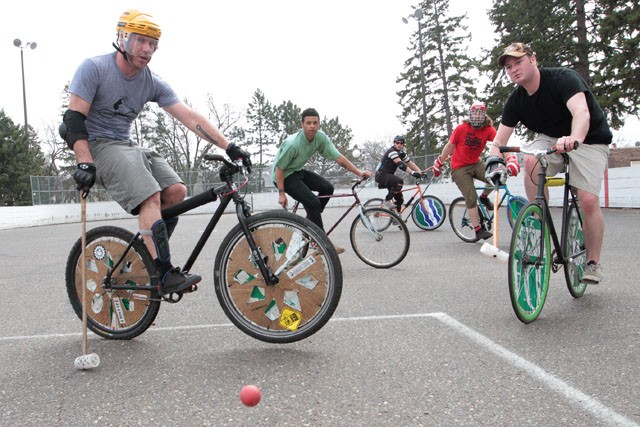 John Gordon, right, shoots the ball past Ebbin Martin, left, during a game of bike polo in South Minneapolis April 10. In addition to practicing three times per week, the group holds games every Saturday for new players to learn the sport.

Already two weeks behind the originally scheduled timetable, the Student Services Fees Appeals Committee may face another postponement after Tuesday.
Two student groups âÄî the Black Student Union and the Queer Student Cultural Center âÄî have yet to hear the appeals committeeâÄôs final decisions regarding their groupsâÄô funding.
Students groups were originally meant to present in front of the appeals committee from March 30 to April 5. QSCC, the Graduate and Professional Student Assembly and Campus Atheists, Skeptics, and Humanists presented last Monday.
Because of scheduling conflicts, BSU and the appeals committee were unable to arrange a time to meet last week. Both plan to meet Tuesday night to hear BSUâÄôs appeals presentation.
If all five voting members are present, the appeals committee should make a decision on QSCCâÄôs appeal Tuesday. Last Monday, the four present members voted to table the decision until all five were in attendance.
Due to this delay, the deadline to submit appeals to Vice Provost Jerry Rinehart had also been postponed from April 8 to April 19. But with some appeals still pending, itâÄôs unknown whether the deadline will move again. At press time, the decision regarding the deadline for appeals to Rinehart had not been announced.