The 6-story hotel, a franchised Home2 Suites by Hilton located at 2800 University Ave. SE, will break ground by next spring. 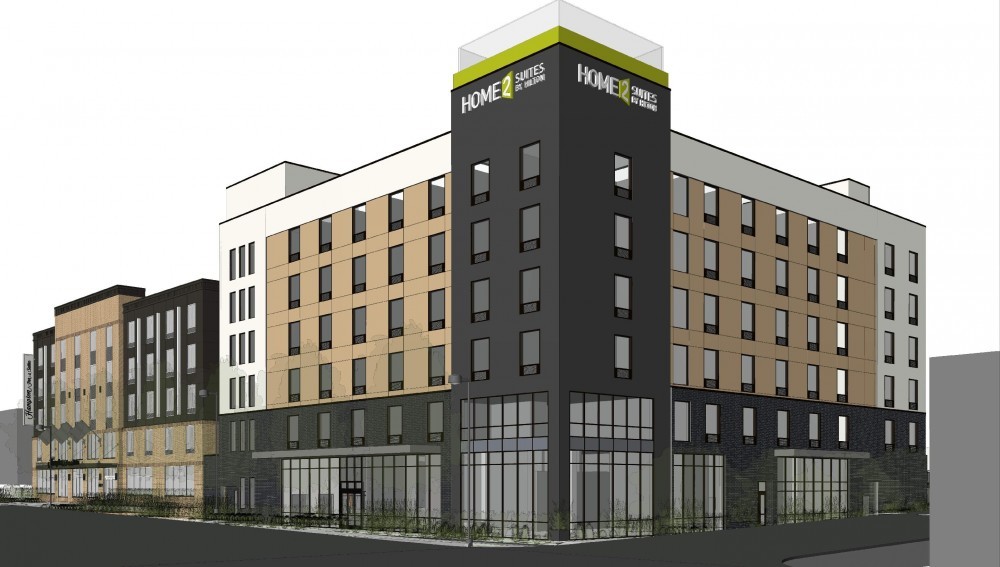 A rendering of Home2 Suites at 2800 University Ave. SE, a new hotel in Prospect Park.

A new extended-stay hotel is proposed to begin construction by next year in the Prospect Park neighborhood.

The 6-story hotel, a franchised Home2 Suites by Hilton located at 2800 University Ave. SE, will break ground by next spring. A community task force is underway to aid the developer, Prospect Park Properties, and the architect, Tushie Montgomery Architects, in creating a plan for the hotel.

Plans for the hotel currently include amenities for extended stays, like king studios and double-queen rooms, full-size refrigerators and kitchenettes, said Jeff Barnhart, president of Prospect Park Properties. Connected to the ground floor of the Hampton Inn and Suites, the property will also have around 100 parking spaces and a cocktail and coffee bar.

“We’ve just realized that there’s more demand for an extended-stay product in the University of Minnesota area,” Barnhart said. “We’re just trying to do what we think are, arguably, well-placed strategic developments within our existing portfolio.”

Other development sites in the area facilitated by Prospect Park Properties include the Hampton Inn and Suites, The Link, The Pillars of Prospect Park and the Green on Fourth Apartments.

Ward 2 City Council member Cam Gordon said the number of hotels around campus has been increasing over the past 10 years, with developers discussing extended-stay hotels periodically.

The Halo Hotel and Apartments, developed by North Bay Companies, in Marcy-Holmes is currently going through the city’s approval process.

“There’s a demand for people visiting campus, visiting family and friends there. But there’s also the hospitals too,” Gordon said. “I am hopeful that [the developer will] work with the community and it’ll be a win-win for the project itself, but also for the surrounding area.”

Julia Turnbow, a University student living in Prospect Park, said she doesn’t personally see the need for more hotels in the area.

“But it seems like a very specific kind of audience that they’re going for,” she said.

Prospect Park Association’s five-person task force, formed at a June meeting, is working to come up with an agreement with the developer to voice neighborhood resident wants and concerns, like exterior design plans and parking availability. After the agreement is made in the form of a memorandum-of-understanding, Prospect Park Properties plans to take the proposal to the city’s Planning Commission in September.

“I think most people are happy with the direction that we’re headed,” said Dan Bryant, chair of the task force.

Joyce Walker, also a member on the task force, said she wants to look at ways to further “big picture” community engagement, not just the building’s architecture.