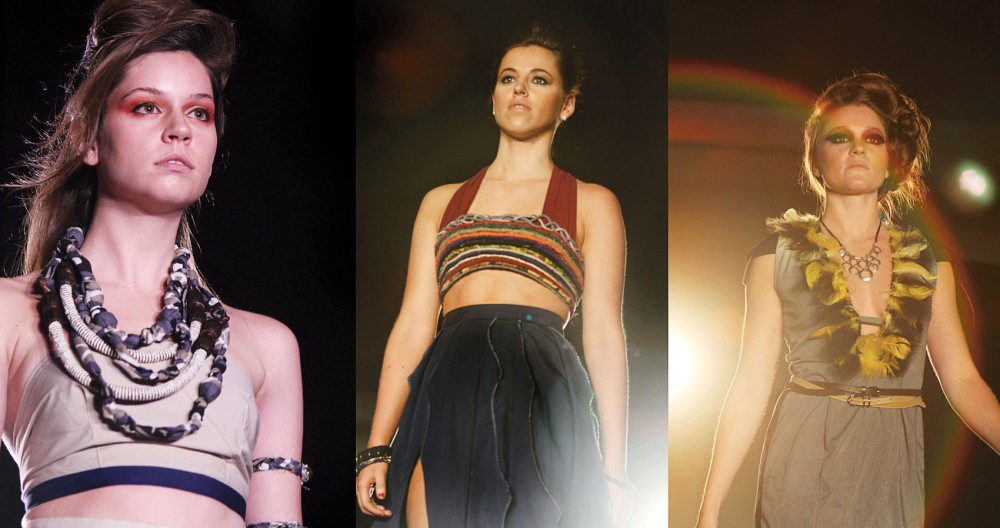 Left to right Med and dental students Nellie Pooler, Rachel Anderson and Kayla Anderson wear scrubs by design students Ellie Hottinger, Mai See Her and Mai Yang (respectively) on Saturday at TCF Bank Stadium. The "Scrubbed into Fashion" show was a fundraiser for the Smile Network.

Apparel designers from the University of Minnesota’s College of Design were selected to create three looks using medical scrubs that were modeled Saturday night at TCF Bank Stadium.

The show was part of the second annual “Scrubbed into Fashion” challenge — a “Project Runway”-inspired event produced by the Medical School Student Council and the Fashion and Business student group.

All proceeds from the show go toward the Smile Network, a Minnesota-based nonprofit foundation providing reconstructive surgeries for children and young adults in developing countries.

Over the course of two months, the chosen eight designers had to create a ready-to-wear look, couture look and traditional medical attire look all inspired by African culture, since the next destination for the Smile Network is in Africa. The designers were given scrubs and an additional $75 for other supplies.

Students from the University’s dental and medical schools modeled the African-inspired garments. As an added challenge, this year’s designers had to incorporate a male model in their runway collections. Most of the designers saw this as their biggest challenge.

“My male model has such a broad stature, it was so different from what I’m used to,” said Maisee Her, who won this year’s contest.

Her line was inspired by the people of Maasai, an ethnic group located in Kenya and northern Tanzania.

She focused on the fullness of their skirts and draped clothing while mimicking natural elements. The African horned cucumber melon served as the inspiration for the skirt in the couture look, Her said.

“I had a vision in mind before applying, but once I started to work with the fabrics, I found some things were impossible,” she said.

When Her was announced the winner, her mother bolted up to the stage with tears streaming down her face to congratulate her daughter.

“That moment was surreal,” Her said.

The amount of money made Saturday tripled last year’s earnings, pulling in around $15,000. This money will go toward funding 30 surgeries for a mission, which leaves April 26 for Lake Atitlan, Guatemala.

The Smile Network has performed more than 2,000 surgeries. Surgeries take no longer than 45 minutes and cost $500, said Kim Valentini, founder of the Smile Network.

“These designers did an amazing job; I was blown away,” Valentini said. “I had to go backstage to actually touch the garments … I couldn’t believe they were scrubs.”

Christopher Straub, a contestant from season 6 of “Project Runway,” and Todd Walker from Fox Channel 9 news hosted the show.

“I’m from Minnesota, and it is such a joy to see talent in my home state at this caliber,” Straub said.

The event originated in 2010 through a conversation at a conference-room table with medical student Phillip Radke and Valentini.

“I wanted to create an opportunity for young talent to flourish,” Radke said. “And to see my crazy, zany dream become a reality.”