Owners say the campus area is transitioning into a food and drink hub as both rent rates and the interest of national chains grow. 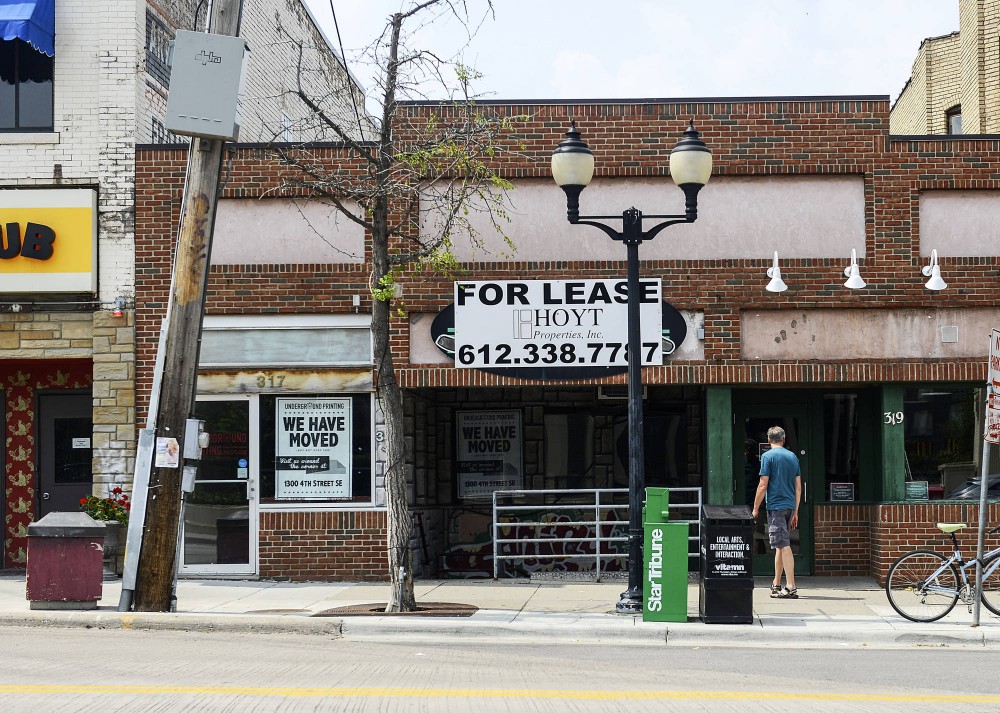 A man looks at the building where Brueggers was located on 14th Avenue in Dinkytown on Thursday. Brueggers closed in June due to an increase in the retail space's rent rate.

Instead, they say turnover in businesses and any resulting empty space — like the one left by Bruegger’s Bagels when it closed late last month — reflect the area’s rising rent and a shift toward more nightlife and food establishments.

Gary Eidson, a Dinkytown property owner since 1990, has had one of his own retail spaces remain empty for about four months.

But over the course of negotiating a contract for the spot, he said, there has been great interest in the property, and he’s not concerned about recent changes in Dinkytown’s business landscape.

“The Dinkytown neighborhood has changed quite dramatically,” Eidson said. “Over the last 10 or 20 years, the space is in greater demand and rents are generally increasing. More successful retailers are seeing it as a desirable place to do business.”

Those rising rent rates have led to an influx of chain businesses and national tenants who can afford them, like CVS Pharmacy and Target, the latter of which is set to open its first-ever TargetExpress store at the base of The Marshall apartment complex on 14th Avenue Southeast later this month.

“Most of them can pay the higher rents that are attractive in the area,” said Irv Hershkovitz, owner of Dinkytown Wine and Spirits and several other area properties.

Steve Young, owner of the former Bruegger’s site, said despite it being a national chain, the bakery’s closing at the end of June likely stemmed from the company’s other campus location in Stadium Village.

“They must have determined that having two locations at the U was one too many,” he said.

Young said the turnover of Dinkytown stores is characteristic of most commercial business areas.

“If they lose their focus on what their customers need, they are going to struggle,” he said. “That’s not just with Dinkytown, but with any retailer or restaurant anywhere.”

Hershkovitz, too, said he’s unfazed by the area’s recent handful of vacancies, including one of his own.

“I probably got up to 10 phone calls a week just from the sign in the window,” he said, “and 99 percent were food operations.”

Many property owners in the area say restaurants and bars are becoming the most viable ventures in Dinkytown because University students — arguably the business hub’s main patrons — are likely to spend disposable income on food and drink, so the area is evolving to fill that need.

“We keep growing, changing and expanding,” said Greg Pillsbury, the owner of Burrito Loco Bar and Grill. “Right now, it’s a lot more nightlife- and food-oriented — but if that’s what works, that’s what works.”

Ward 3 City Councilman Jacob Frey, who represents neighborhoods around the University, echoed local business owners in saying vacancies are a natural part of the area’s evolution.

“There’s always transition when you have the influx of students and residents to the area. I know some small local businesses are thriving,” he said. “If there are some vacancies, that is not a problem.”

“It’s a good area,” she said. “It’s still vibrant, and I think it’s more vibrant than it was a couple decades ago.”