Once in doubt, NCAA quarterfinals await

The Gophers started the season poorly, but have surged since January. 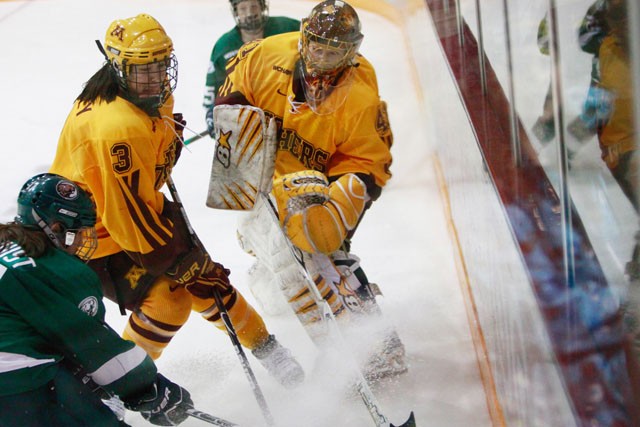 To say Minnesota stumbled out of the gates this season would be an understatement.

The Gophers were swept by both North Dakota and Minnesota Duluth in October, spilt a series with rival Wisconsin the following week and at that point were sitting at 6-5.

Critics were wary of whether Minnesota could make up the ground it lost and qualify for the NCAA tournament.

But that was November, and respond, the Gophers did.

Four months and 20 victories later, Minnesota (26-9-2, 18-8-2 WCHA) is set to take on Boston College this Saturday in the NCAA quarterfinals.

This response to the slow start is something junior forward Jen Schoullis said gives her team an edge.

âÄúI think the adversity at the beginning of the season is what sets us apart from other teams,âÄù Schoullis said. âÄúI think the leaders on the team really took it upon themselves to bring the team to a brighter horizon, and we definitely turned it around.âÄù

Minnesota lost a heartbreaker to Wisconsin last Saturday in the WCHA final, but that is something head coach Brad Frost said his team is using as motivation.

âÄúI think Wisconsin is hands down the No. 1 team in the country, and we had them right where we wanted them for a majority of that game,âÄù Frost said. âÄúThe only way you can gain that experience is by going through it, and I think we will come out better on the other side of it.âÄù

Despite losing to Wisconsin, the Gophers are on a tear as of late, entering the first round of the NCAA tournament at 13-3-2 since New YearâÄôs Day.

Boston College (26-6-6, 13-4-4 WHEA) enters the quarterfinals with a swagger of its own after capturing the WHEA tournament title.

They are led by Olympians Kelli Stack and Molly Schaus, both whom are also finalists for the Patty Kazmaier award.

Schaus possesses an impressive .941 save percentage on the season, and Stack leads the Eagles in scoring with 34 goals and 22 assists.

The Gophers have a Patty Kazmaier finalist of their own in Noora RÃ¤ty.

RÃ¤ty posted a career high 51 saves in MinnesotaâÄôs loss to Wisconsin and is someone Frost said will need to come up big again this weekend.

âÄúTheyâÄôve got three lines that can play, and theyâÄôre a big and fast team as well,âÄù Frost said. âÄúI would expect it to be a quick game where goaltending is going very important.âÄù

Minnesota has only faced Boston College on four other occasions and remains unbeaten against the Eagles all-time.

The Gophers hosted the teamsâÄô last meeting two years ago in the NCAA quarterfinals, triumphing 4-3 to advance to the Frozen Four.

Though Minnesota will not have the luxury of home-ice this time around, Frost said his team is ready to travel out East.

âÄúI think itâÄôs actually a good thing for us to get away and get on the road here and make it feel like weâÄôre in the national tournament,âÄù Frost said. âÄúItâÄôs an exciting time for us to get out to Boston College and try to get to that Frozen Four.âÄù