U Peace Corps involvement expected to increase with new rep

The University is the most recent of ten Midwestern colleges to hire someone of this capacity. 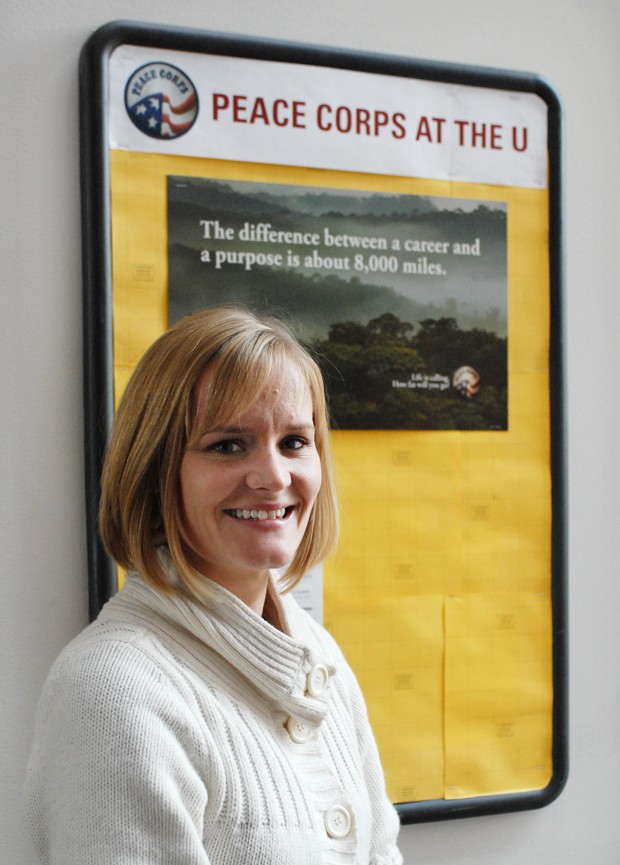 Erin McGillivray was recently hired as the Peace Corps representative for the University of Minnesota.

Already ranked in the top 10 among colleges for producing graduates who volunteer in the Peace Corps , the University of Minnesota is hoping that a new on-campus recruiter will further boost participation in the program. Recruiter Erin McGillivray began working part-time on the campus this semester. She said at first traffic through her office was slow, but as more student have been hearing about recruitment on campus, meeting attendance has grown exponentially. âÄú[In September,] I was brand new to campus so people didnâÄôt really know about me yet,âÄù she said. While SeptemberâÄôs meeting was small, she said OctoberâÄôs brought twice as many attendees. âÄúIâÄôm really excited to see what NovemberâÄôs going to bring,âÄù McGillivray said. âÄúIâÄôm a little nervous about running out of space in the room if it keeps doubling every time.âÄù Increasing awareness and maintaining accessibility on campus is a key role of McGillivrayâÄôs. âÄúOne of the main things of having an on-campus âÄ¦ person is to really get out there and meet with students, visit classrooms, meet with professors and really have that presence on campus,âÄù she said. The University is the most recent of 10 Midwestern colleges overseen by the Peace Corps Chicago Regional Office to hire someone for the position, spokeswoman Christine Torres said. âÄúThe concept of having part-time, campus-based recruiters for the Peace Corps is not a new concept in itself,âÄù Torres said. McGillivray said she suspected the University took more time than other schools to hire a recruiter because there was a Peace Corps office in Minneapolis, resulting in less need for an on-campus representative. However, the Minneapolis office closed in January, and McGillivray said her position was created at the University to maintain a presence in the Twin Cities. One student McGillivray has helped through the Peace Corps application process is public health graduate student Juliet Massie . Massie attended a joint public health and Peace Corps information session last week, where she met McGillivray and other Peace Corps alumni. She is interested in applying her education in public health to HIV/AIDS education in Africa. âÄúI mostly spoke with Erin,âÄù Massie said of the event. âÄúShe gave me really detailed information.âÄù McGillivray advised Massie on specific elements of her application âÄî like turning materials in early and making availability dates more flexible âÄî but also served as a comfort by being present as an in-person representative. âÄúJust having the face-to-face interaction makes everything easier and far more personal,âÄù Massie said. âÄúBringing it down to that local level, I think, makes it far less intimidating.âÄù Six hours of McGillivrayâÄôs week are devoted to office hours. âÄúI help [students] either decide if Peace Corps is right for them, help them through the application process [and] answer their questions,âÄù she said. McGillivray has both professional and personal experience to share with prospective applicants at the University. A 2002 graduate of the University of Puget Sound in Washington , McGillivray studied abroad in Nepal as an undergraduate and spent 2002 to 2004 in Kenya working with HIV/AIDS education for the Peace Corps. During the time between her volunteering in Kenya and her current work at the University, McGillivray was a full-time recruiter for the Peace Corps office in the Twin Cities. Torres said prior to having representatives like McGillivray, information about the Peace Corps would be spread by college faculty who are Peace Corps alumni or national recruiters that visited campuses two or three times a year.