The redshirt senior finished first on the team at their last meet in Lousiville. 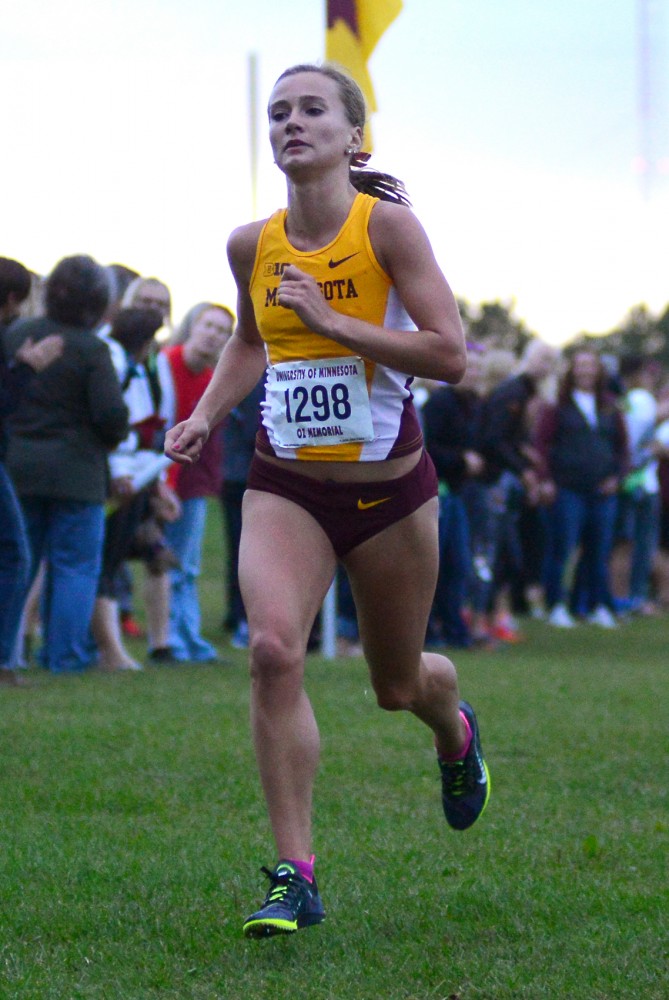 Thomas Jaakola
Redshirt senior Liz Berkholtz is looking to find her best running form again as the Gophers transition into the latter part of their season.
Berkholtz has run with more strength in the middle of October during each of her seasons so far at Minnesota.
In 2013, her redshirt sophomore season, Berkholtz started the year by finishing fifth for the Gophers in the Oz Memorial, but she moved up to fourth when she ran a then-career-best time of 20:50 at the Wisconsin Adidas Invitational in October of that year.
She did the same thing during her redshirt junior season last year, when she finished fifth for the Gophers at the Oz Memorial but sped up to lead the team when she ran another career-best time of 20:34 at Wisconsin.
“She’s improved every year since we were freshmen, and she is always really fit and ready to go at the big meets at the end of the season,” redshirt senior Kaila Urick said.
Berkholtz finished second for the team at this year’s Griak Invitational — behind redshirt junior Haley Johnson — following her pattern of years past. But at the Greater Louisville Classic on October 3, Berkholtz bounced back to lead the team in the race.
“Over the years I’ve figured out what works best for me,” Berkholtz said. “A lot of the time I have to work really hard and train through a lot of things for half the season, and then, after that, I start to feel like night-and-day a different person.”
Head coach Sarah Hopkins said Berkholtz knows she’s closer to some of her goals this year, like becoming an All-American.
“Especially this year, she’s very locked in on her goals,” Hopkins said. “When she came in, she wanted to be an All-American. She wanted to contend for the Big Ten title, and she knows that this is kind of the last shot for all of those things.”
Berkholtz said her summer preparation is starting to pay off, and her strength has been building throughout the season.
“You’re running on heavy legs at the beginning of the year, and then you’re training so that you can run really fast at the end,” Berkholtz said. “You can improve light-years.”
Berkholtz is making her final push for the Gophers this year heading into the final part of the season, and her form appears to be right on track for her own personal success.
“I think you’re seeing the fruits of that labor in terms of her really focusing in on the big goals and not just kind of going in and hoping it goes well,” Hopkins said. “She has a very clear picture of what she wants to do and accomplish.”
Delete Image
Align Left
Align Center
Align Right
Align Left
Align Center
Delete Heading