The men’s team surpassed its win total from all of last season. 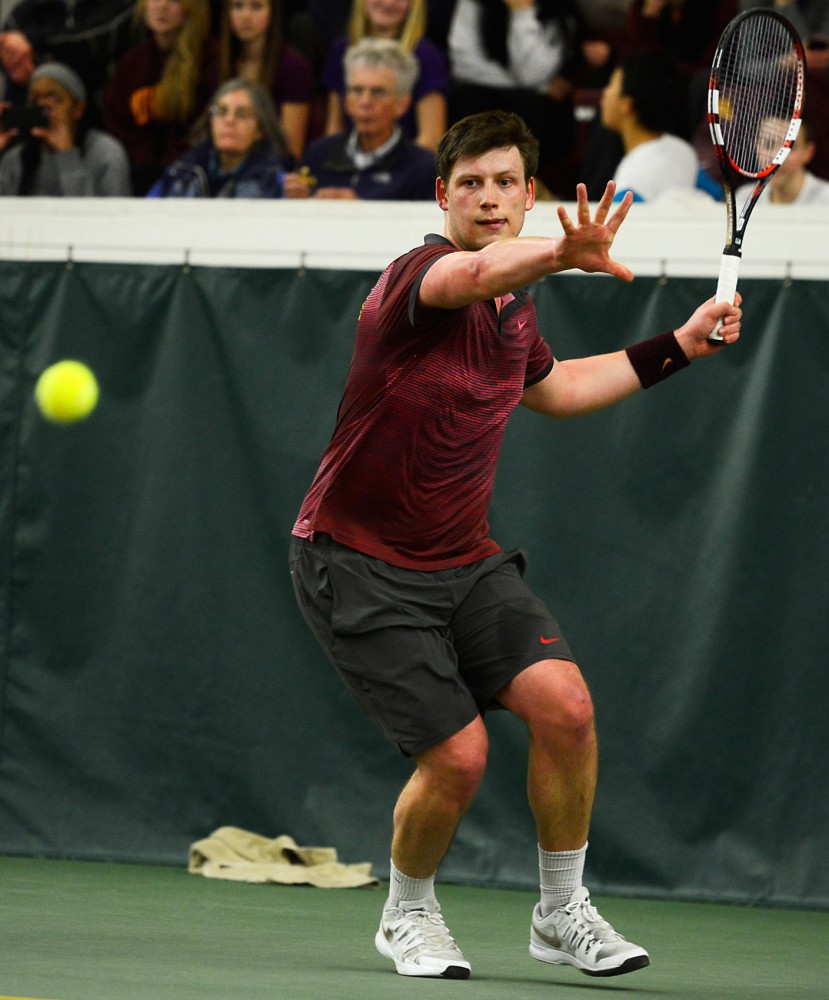 Senior Leandro Toldeo volleys the ball at the Baseline Tennis Center on March 6 against Washington.

The Gophers’ trip to Michigan proved to be a forgettable ending to spring break.

After Michigan overpowered the Gophers on Saturday, Minnesota lost to Michigan State by one point on Sunday afternoon.

“We’re going to have to fight for every win we get in the Big Ten. It’s just [going to] be that way pretty much here on out,” head coach Chuck Merzbacher said. “We just came up short, but it wasn’t [because of] lack of effort.”

Redshirt junior Julia Courter put forth a consistent effort for the Gophers over the weekend.

In Saturday’s contest against the Wolverines, she captured Minnesota’s first and only set victory of the competition.

“It was good to get a set,” Courter said. “Obviously, I wish I could have gotten a match. … I think everyone played really well. Michigan’s just a strong team.”

Merzbacher said Michigan simply has too many blue-chip players across the board to compete with.

“We knew we had our hands full,” Merzbacher said. “They’re flat out better than us at every spot.”

Courter followed up with a quality showing in the Sunday matinee.

“I actually was playing the same girl I played last year, so I felt super confident,” Courter said. “I think, overall, everyone was really confident, ready to beat Michigan State.”

Unfortunately for Minnesota, Baylis emerged with a two-set victory, sending the Gophers back to Minnesota without a victory in Michigan.

“It just came down to some clutch tennis, and they got it,” Merzbacher said. “We just didn’t get it down.”

Following a loss in its last nonconference match of the season, the Gophers got back to their winning ways on Friday and Sunday, downing both Iowa and Nebraska.

The Hawkeyes provided little fight against the Gophers. They whipped Iowa by a final score of 7-0.

“It really wasn’t close,” head coach Geoff Young said. “It was nice to kind of go through them pretty handily.”

The Cornhuskers put up a better fight, however, forcing many of the matches into third sets.

“It was a close match,” Young said. “I thought everyone did a really good job in singles.”

Senior Mathieu Froment sealed the victory for Minnesota, which surpassed its win total from last season with its 5-2 victory over Nebraska.

“It was a good effort,” Young said.

With their nonconference schedule behind them, the Gophers now shift their focus to Big Ten opponents.

The national rankings currently pit Minnesota as the third-best team in the conference behind Illinois and Northwestern — two teams the Gophers face at the end of the regular season.

While it would be easy to look ahead to those last two contests, Young said the team’s focus remains on the next opponent.

“We’ve got Purdue and Indiana this weekend, and that’s all we’re trying to think about,” Young said.