The Minnesota Daily • May 3, 2016 • https://mndaily.com/259279/sports/baseball/boxwell-matures-after-hard-freshman-campaign/

The outfielder is third on the team with a .379 batting average this year. 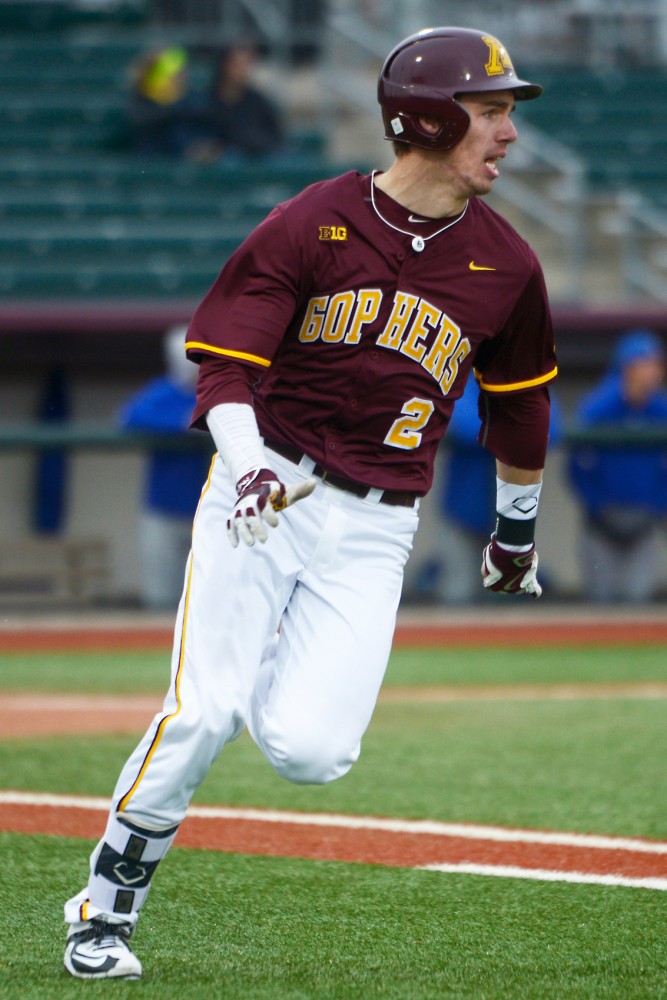 Sophomore Alex Boxwell runs to first base during the Gophers' game against South Dakota State at Siebert Field on April 13.

Kaitlin Merkel
Sophomore outfielder Alex Boxwell was used to baseball success growing up.
The Minnesota Mr. Baseball finalist was also used to being on campus, as his mother, Lisa, was a hurdler on the track team and brought him to Gophers games growing up.
“I grew up wearing all the gear, going to football games,” Boxwell said. “I committed very early once I got an offer from Minnesota. I knew that’s where I wanted to be. It was kind of a dream come true for me.”
When he arrived for his freshman season, though, things didn’t go as planned. Boxwell batted .194 in 67 plate appearances, with four extra base hits. He had three walks and 25 strikeouts.
“It was tough for me a little bit my freshman year. I got a decent amount of playing time, [but] I took my lumps a little bit,” Boxwell said. “I didn’t play as well as I thought I would have. I got knocked down, but I learned a lot.”
The summer after his rough debut, Boxwell headed to Iowa to play for the Waterloo Bucks in the Northwoods League. He batted .289 in 45 games and said the summer helped him bring his confidence back up.
“It helped me grow up a little bit, [become] a little bit more mature,” Boxwell said. “It helped me deal with failure, which helped me be more successful. Just knowing how to deal with when I do struggle at times, that I can bounce back.”
He’s rebounded well his sophomore year. Through 19 starts and 13 additional appearances, he’s hitting .379. His batting average ranks third on the team, while his .561 slugging percentage ranks second.
Boxwell’s plate discipline has improved, too. This year he’s struck out 15 times and walked seven times.
He led No. 19 Minnesota to a 14-6 series-clinching victory over Illinois on Sunday, recording three hits and a walk. He also drove in two runs and scored three himself.
Head coach John Anderson said he’s proud of the changes Boxwell has made this season.
“He had a typical freshman year, up and down. Kids coming out of high school … are used to having lots of success,” Anderson said. “He’s come back this year and worked at it, made some adjustments. … I just think he’s in a much better place.”
Sophomore Micah Coffey, who came in the same year as Boxwell, said he’s happy to see his teammate having the success he deserves.
“He’s kind of starting to piece this thing out and figuring out how to play,” Coffey said. “I’m excited to see how he’s able to improve from here on out because he’s got all the talent in the world.”
Delete Image
Align Left
Align Center
Align Right
Align Left
Align Center
Delete Heading