Rink rats: Just roll with it 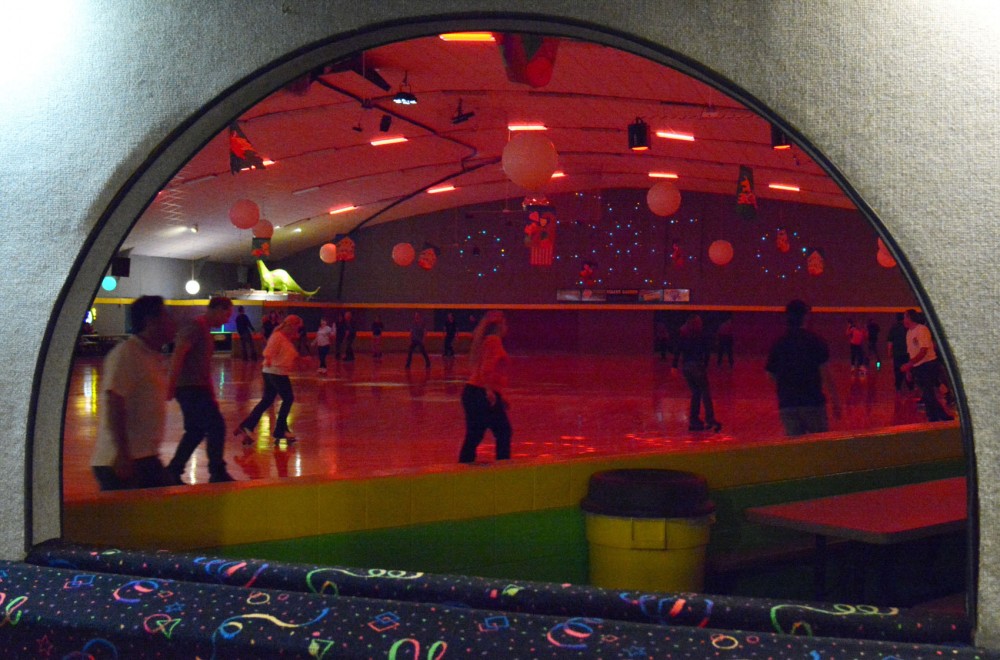 No two patrons of St. Louis Park’s Roller Garden could agree on the exact terminology for what many of them dedicate several nights a week to doing. No two patrons have the exact same motivation for coming, either.

In the early evening, the Roller Garden resembles any roller rink from your youth: patient parents watch as their children stumble on roller blades to the sound of Top 40 hits blaring over the speakers.

But after 8:30 p.m., the rink is strictly 18-and-up and an eclectic mix of skaters begins trickling in. Graceful adults replace bumbling children and Michael Jackson replaces Katy Perry.

“Some people come from over 100 miles out,” said Tom, who declined to give his last name, but said he’s skated at Roller Garden since the 1980s. “Most people who come are regulars.”

Tom pointed out that casual patrons can be distinguished by the bright orange skates they rent from the rink, whereas dedicated skaters bring their own.

Every age group is represented in the motley crowd. By 9 p.m., the rink is packed with skaters. Some speed around the edges of the rink while others do freestyle dance moves in the center.

The Roller Garden hasn’t always been this successful. Manager Russ Johnston said the rink is currently seeing a resurgence in interest.

“Well, I think skating is kind of cyclical,” Johnston said. “The heyday was obviously in the ’70s and ’80s, but people are starting to come back.”

Older people who frequented the Roller Garden in their youth are coming back, too, Johnston said.

For Horatio Whaley and younger patrons like him, skating has nothing to do with nostalgia. With an Oakland Raiders beanie pulled tight over his head and headphones stuffed in his ears, Whaley’s skating style incorporates tight spins and technical moves.

Whaley said he doesn’t like the music the Roller Garden plays so he listens to his own — a sentiment shared by several other skaters. Though the mix of classic rock and ’70s pop songs appeals to retro sensibilities, younger skaters don’t see that particular allure.

“I only started skating a couple years ago,” Whaley said. Though he appreciates the community aspect of the rink, he said he would “skate even if there was no one else [at the Roller Garden].”

Skating is good exercise, Whaley said, but for dedicated skaters it’s much more.

“This place means the world to me” said Angela Higgins, who began roller skating after getting laid off several years ago. Skating gave her something to do during the day, she said.

Higgins’ moves are reminiscent of a ballerina’s. She effortlessly glides around the floor with deliberate, fluid movements.

“Because of skating I quit drinking, I quit smoking,” Higgins said. She comes five to six times per week because the Roller Garden provides a release.

“I really think this place is iconic” Johnston said as he looked over the rink. Though people don’t skate for the same reasons they did in the ’80s, the skaters of the Roller Garden have carved out a unique community for themselves.