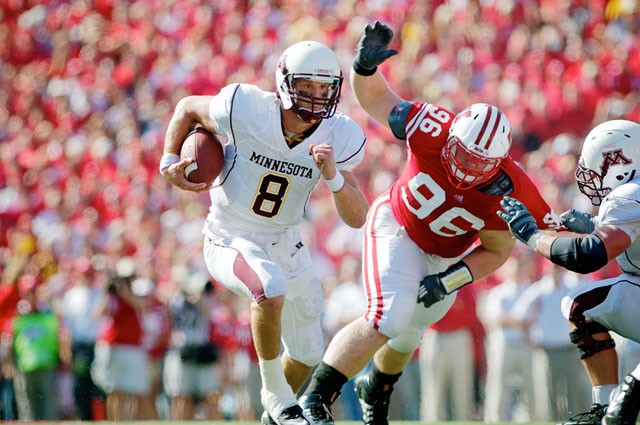 There are many ways to quantify how long Joe Paterno has been the head coach at Penn State. A few examples will be at play Saturday, when the 83-year old coach visits the third Gophers stadium as the Nittany LionsâÄô head coach. Down the street, the ninth U.S. President of PaternoâÄôs career will be holding a rally on Northrop Mall. But perhaps the most compelling stat for Gophers fans is that Jeff Horton will become the ninth Minnesota head coach to face Paterno in his 45 years at the helm, speaking to MinnesotaâÄôs decades-long quest to find a face of the football program. Paterno has been the steady face of Penn State football for decades, winning two national championships and three Big Ten championships. Minnesota hasnâÄôt won a national title since 1960 or a Big Ten championship since 1967, both under legendary coach Murray Warmath âÄî eight head coaches ago. While there are other reasons for MinnesotaâÄôs dormancy in winning titles, there is something to be said for the relationship between continuity in a coaching staff and success. To Horton, the biggest advantage in having a consistent staff is in recruiting, which he called âÄúthe lifeline of college football.âÄù âÄúYou have the same coach goes back to that high school, your recruiting area, every year,âÄù Horton said. âÄúThat high school coach gets used to seeing you, know you, trust you, instead of you trotting a different guy in there every other year or every year.âÄù Players often have a special relationship with the coach that brought them into a program, but the news that Tim Brewster was fired made many players realize that they came to Minnesota for the program, and not necessarily for the coach. Senior defensive back Ryan Collado was recruited by former Minnesota head coach Glen Mason, and verbally committed to the school just four months before he was fired in December 2006. âÄúI was shocked,âÄù Collado said. âÄúBut just like it is now, I committed to the program, not to a single coach.âÄù Sophomore MarQueis Gray, who may be BrewsterâÄôs most talented recruit, said that although Brewster was a major part of why he committed to Minnesota, his view of the program hasnâÄôt changed. âÄúThe other coaches, the fans and the city also played a big [part],âÄù Gray said. âÄúThe city and the fans are still here, so IâÄôm going to stay and love what IâÄôm doing here.âÄù For most of the team, Brewster was the only head coach they knew at Minnesota. But the Brewster era was also characterized by a seemingly-endless revolving door of coordinators, which can be a difficult situation for a player to adjust to on the fly. Maybe nobody has been more impacted by coaching changes more than senior quarterback Adam Weber. Weber was a redshirt freshman in MasonâÄôs final year, and endured major changes in the playbook when HortonâÄôs predecessor Jedd Fisch was hired as the offensive coordinator. Horton became the GophersâÄô third offensive coordinator in three years when he was hired in January. âÄúYes, it’s been strange, but it’s all I know,âÄù Weber said. âÄúWhatever cards I’m dealt or we’re dealt, [weâÄôll] try to make the most of it. Whether it be a coaching change or different offense, whatever, you just try to take it on with 100 percent of your effort, and with a positive attitude and try to make the most of it.âÄù Cornerback spot up for grabs In his first career start on defense last week, Troy Stoudermire impressed the coaching staff enough to give him another start at cornerback. ThatâÄôs a good sign for a secondary that has lacked any kind of consistency or depth in their starters from week to week, which is part of the reason Stoudermire was moved from wide receiver to cornerback a few weeks ago. Sophomores Michael Carter and Kyle Henderson battled this week in practice for the other starting cornerback spot. Stoudermire gave up kick-returning duties last week in order to stay fresh on defense, but will resume his chase for the most career kick return yards in Big Ten history Saturday. But while Stoudermire rested last week, WisconsinâÄôs David Gilreath returned four kicks for 163 yards, including a game-opening touchdown against Ohio State to claim the record for himself. Stoudermire is now 147 yards behind Gilreath. âÄúOf course I can catch him,âÄù Stoudermire said. Hageman suspended Horton announced Wednesday that freshman defensive tackle Ra’Shede Hageman has been suspended for Saturday’s game for an unspecified violation of team rules. Hageman was listed on the depth chart behind junior Brandon Kirksey. Horton wouldn’t elaborate on what triggered the suspension, but said that it occurred on Tuesday. Hageman has played in all seven games this season, tallying four tackles.