The selection was essentially a formality; Kaler was named the only finalist Nov. 12. 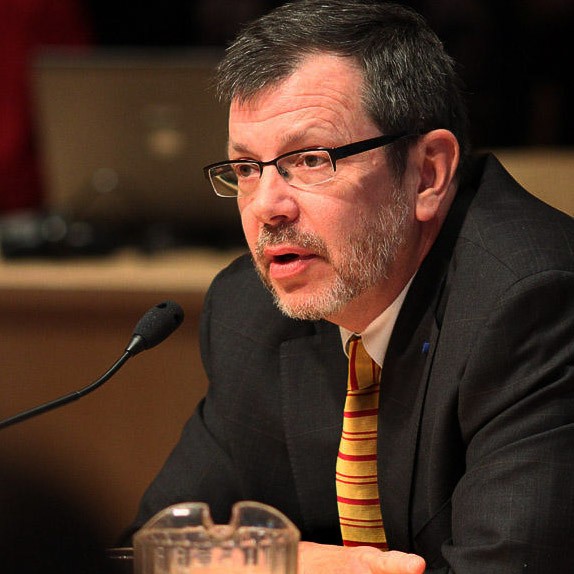 Stony Brook University Provost Eric Kaler answers questions from the Board of Regents Thursday at the McNamara Alumni Center. Kaler was unanimously voted in as the University’s 16th President and will begin his term in July.

The University of Minnesota has named Eric Kaler its 16th president.

His official appointment Thursday was little more than a formality following a two-day, whirlwind campus visit that included meetings and interviews with students, staff, faculty and community members.

“The opportunity to come back to a place thatâÄôs so meaningful at such an important time for the University âÄ¦ itâÄôs a thrill beyond imagine,” Kaler said.

The Board of Regents unanimously approved a four-year contract for Kaler with a base salary of $610,000 annually and $50,000 in retirement payments in his second, third and fourth years.

The 54-year-old, who is currently provost at Stony Brook University in New York, received a chemical engineering doctorate from the University of Minnesota in 1982. He was the sole finalist to emerge from a five-month search process that included 148 candidates, and he will take over for outgoing University President Bob Bruininks on July 1.

He was named the lone finalist for the position Nov. 12 after four semi-finalists were selected. Two semi-finalists dropped out of the race because they didnâÄôt want their names made public.

Kaler will be the second alumnus to lead the University as president after Malcolm Moos, who served from 1967 until 1974. Kaler said this was the first time heâÄôs applied for a presidential post at a university.

Kaler admitted he still has much to learn about the University, and he will work with a transition team, composed mostly of administrators, to become familiar with the school. He plans to make multiple visits to campus over the coming months, but he will continue working at Stony Brook throughout the transition.

Although he has several “job number ones,” Kaler said his focus will be on learning more about the University, making connections with leaders in local and state government and reaching out to alumni and donors.

He spent the weekend around campus and attended a celebration open to students, staff and faculty Friday at McNamara Alumni Center.

Before his meeting with the regents, Kaler met with student leaders to discuss how students would be involved in his decision-making process.

“We need a charismatic, dynamic leader,” Martin Chorzempa, a student representative to the Board of Regents, said.

Chorzempa said he thinks KalerâÄôs attitude will lead to positive interactions with students, but itâÄôs too early to tell what his stance on shared governance will be.

Regent David Larson described Kaler as an open and outgoing candidate who, at the same time, was an excellent listener who gave thoughtful answers to questions.

“These are the makings of an excellent leader,” Larson said.

During ThursdayâÄôs board interview, Kaler was asked several times about challenges he had faced as an administrator and how he handled them.

Decreasing state funding was a major issue when he was at Stony Brook, Kaler said, and the administration responded by increased revenues, especially through higher graduate student enrollment.

Facing similar budget issues at the University of Minnesota, Kaler said cuts would be necessary, but they would need to be strategic to protect areas of strength or potential strength. Programs that arenâÄôt strong could be targeted for cuts, elimination or restructuring, he said.

“There are enormous consequences to that, itâÄôs not something that I look forward to,” he said.

The downsizing of one of Stony BrookâÄôs satellite campuses, which has landed the school in an ongoing court battle, was another difficult decision Kaler discussed. The decision was an economic one driven by “dollars and cents,” he said, and affected nearly 400 relocated students.

Regent John Frobenius praised KalerâÄôs ability to adapt and take on challenges in new areas and said he was comfortable with Kaler as a candidate.

Born in Burlington, Vt., Kaler grew up in a military family and moved around the country often during his youth. Kaler called his father, who was a non-commissioned officer in the Air Force, his hero.

Kaler landed in Minnesota as a doctoral student in 1978. He served in a number of leadership roles, including as a student representative to the Board of Regents, where he worked with Kenneth Keller and Nils Hasselmo, who both later became University presidents.

His decorated academic career includes 10 patents and a recent appointment to the 1,000-member National Academy of Engineering, one of the top honors in the field.

He will be joined at the University by his wife Karen Kaler, a graphic designer. The couple has two children; one is a law student at George Washington University and the other is an undergraduate at Auburn University in Alabama.