The men’s team is sending primarily throwers to the Sun Angel Classic. 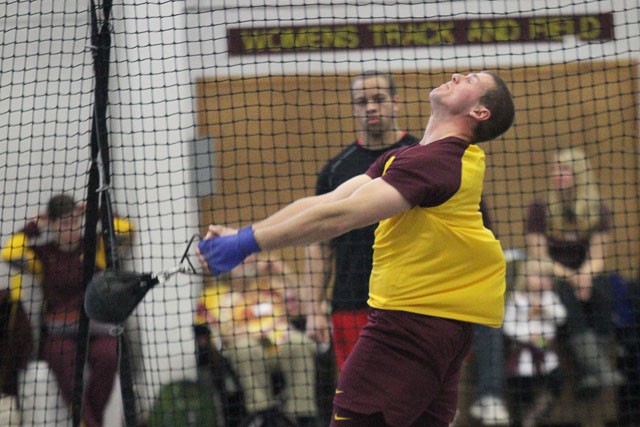 Making its third trip to Arizona in the last calendar month, the Gophers menâÄôs track and field team will compete in the Sun Angel Classic looking to continue the success theyâÄôve had in the Cactus State.

Minnesota head coach Steve Plasencia said the Gophers will send a relatively small group of athletes to compete at the meet, emphasizing his group of throwers.

âÄúItâÄôs a good throws meet,âÄù he said. âÄúOur guys will be able to compete a couple of times down there. There is a meet at Mesa on Friday night and one back at [Arizona State] on Saturday, so the guys will get a lot of reps in, and that is what they need at this time of the year.âÄù

Micah Hegerle and Quentin Mege both sat out the Jim Click Invitational last weekend, but both will be competing in the hammer throw this weekend in a familiar location.

Hegerle and Mege both found success in Tempe, Ariz., only three weeks ago. They both threw the 16-pound hammer more than 200 feet âÄî Hegerle recording a distance of 212 feet, 9 inches, Mege measuring 202 feet, 1 inch.

Plasencia said Aaron Studt and Trey Davis have also been throwing well this season, and he will be looking for a contribution from both men this weekend.

Along with the group of throwers, the Gophers will also send relay teams to participate in the 4×100- and 4×400-meter relays at the Sun Angel Classic.

However, it is unlikely that any of the distance runners will compete this weekend.

âÄúNot every guy is competing every week âÄî sometimes it is better for them to train through a weekend,âÄù Plasencia said. âÄúWe will have a number of guys training through this weekend getting ready for the Mt. SAC Relays next week. That is a big meet for the distance runners.âÄù

Minnesota continues to improve week-to-week, but Plasencia said his team cannot plateau at this point in the season.

âÄúWeâÄôre starting to see some good things out of some people, but we still have about five weeks until we head into another Big Ten championship, which is a goal and a focus for this team,âÄù Plasencia said. âÄúIf we stall out where we are now it might be tough, but if we continue to get back into good form like we were at the end of the indoor season then we will be in a position to compete for another championship.âÄù

Plasencia said he is still finalizing the group he will send to River Falls, but he expects to send âÄú10 or so athletesâÄù to Wisconsin.

Fresh off a fourth-place finish at the Jim Click Invitational, the womenâÄôs track and field team will look to improve this weekend at the Sun Angel Classic.

Minnesota finished fourth out of four teams at the Jim Click Invitational and will be up against top-tier talent this weekend in Tempe, Ariz.

âÄúWeâÄôre trying to continue to build through April,âÄù head coach Matt Bingle said. âÄúI think as long as they are mentally ready to go they can go out and compete at a national-level meet.âÄù

The Gophers will send their sprinters, hurdlers, jumpers and throwers to compete in Tempe this weekend.

MinnesotaâÄôs 4×100-meter has been a strong component of its team this season and clocked a time of 44.99 seconds last weekend in Tucson.

Bingle said he is looking for them to continue to improve on that mark.

âÄúI want to see them be consistent, and as they start to feel better as the year progresses they will continue to drop time,âÄù he said. âÄúIt will be interesting to see how it goes.âÄù

The Gophers will only send their pole vaulters to participate at the Falcon Invitational in River Falls, Wis.

Becca Pilkerton, Lyndie Bosshart and All-American Samantha Sonnenberg will be the only athletes competing for Minnesota at River Falls.

âÄúIâÄôm excited to see what they do and hoping they can take another step here and improve,âÄù Bingle said. âÄúThey are practicing well, they just need to compete and get into a good rhythm.âÄù

Pilkerton will be looking to build off last weekendâÄôs victory in the pole vault, where she cleared a height of 12 feet, 6 inches.