Minnesota will play at FSU in its fourth game away from home in six days. 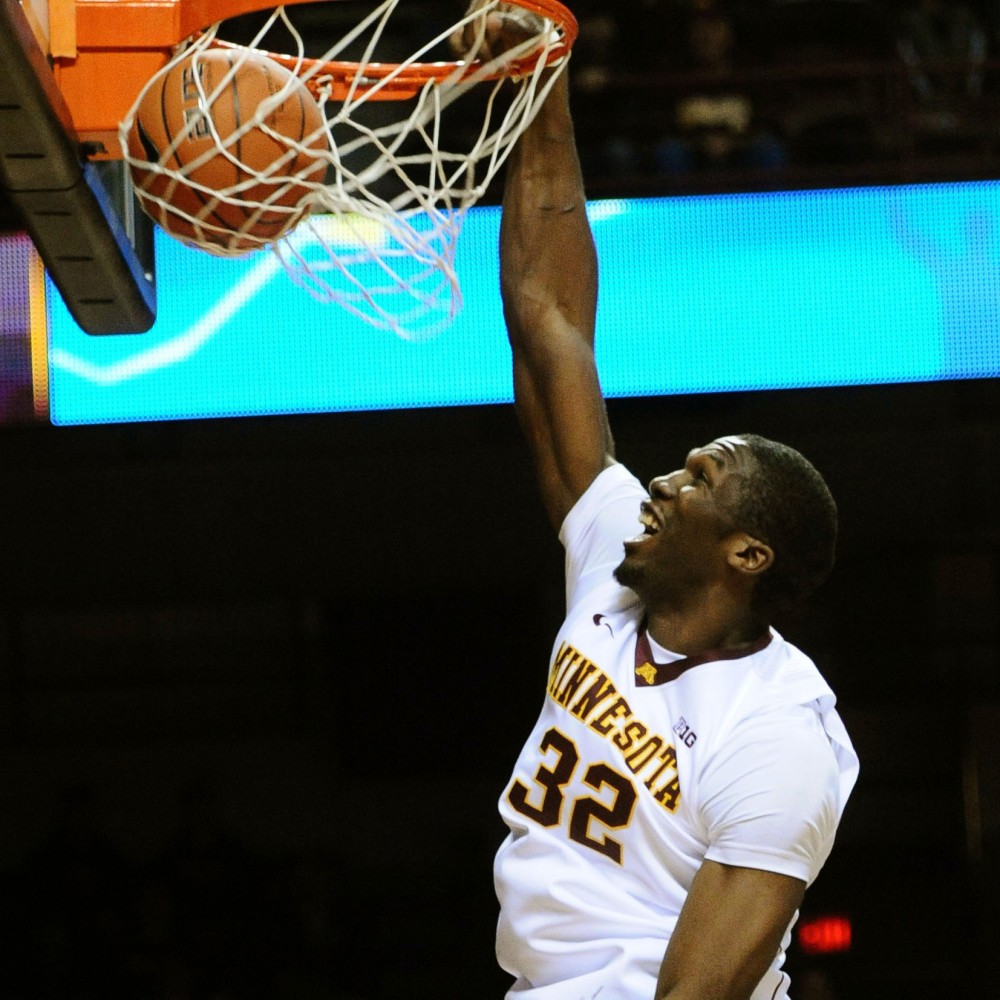 The newly ranked No. 21 Gophers will wrap up a week-long road trip Tuesday at Florida State in the annual Big Ten/Atlantic Coast Conference Challenge.

The Seminoles are the Gophers’ fourth opponent away from home in six days. Minnesota finished 2-1 at the Battle 4 Atlantis tournament in the Bahamas over Thanksgiving break.

“We’d rather not to go to any of those places, to be honest with you,” head coach Tubby Smith said after practice last week, “but that’s how it fell.”

Minnesota will have played as many home games (4) as games away from home this season after facing unranked FSU, the defending ACC tournament champion.

Gophers star forward Trevor Mbakwe tore his anterior cruciate ligament exactly one year ago at a Florida tournament, and his minutes off the bench have slowly increased as this season has progressed.

But Smith has given no indication he’ll start Mbakwe on Tuesday. Instead, he’ll likely stick with his same lineup of Elliott Eliason, Rodney Williams, Joe Coleman, Austin Hollins and Andre Hollins.

In comparison, Eliason, who started in place of Mbakwe last year after his ACL tear, has seen his minutes decrease. The sophomore center averaged 12 minutes during the Battle 4 Atlantis tournament.

Mbakwe still wears a brace on his right knee, but he’s said he’ll likely remove it before the Big Ten season starts Dec. 31.

The sixth-year senior has shown more elements of his game with each contest this season.

He had a breakout performance Saturday, posting a team-high 19 points and 12 rebounds as the Gophers edged Stanford for fifth place in the Battle 4 Atlantis tournament.

Minnesota faces an FSU team that shoots 52 percent from the field — 12th best in the nation — but doesn’t focus as much on defending.

The Seminoles have allowed 69 points per game to the likes of South Alabama, North Florida and Buffalo.

FSU entered last year’s NCAA tournament a No. 3 seed but lost in the second round. This year, it dropped its season opener to South Alabama and fell out of the top 25 soon after.

Still, this is a team that beat Duke and North Carolina for the ACC championship last season, and Minnesota isn’t taking it lightly.

“We can’t overlook anybody,” senior Rodney Williams said last week in practice, “because nobody’s overlooking us.”

Minnesota has been on the other end of the momentum swing since its run to the National Invitation Tournament final last season.

The Gophers have started 6-1 and are coming off back-to-back close victories against Memphis and Stanford. In the NIT final last year, Stanford blew out Minnesota.

The Gophers have held teams to less than 60 points per game in Smith’s sixth season and have adopted a defense-first mentality — a staple of a Smith-coached team.

The Seminoles present a couple of tough defensive tests for Minnesota.

FSU senior guard Michael Snaer has averaged 16.0 points and 6.4 rebounds a game and hits at a 40 percent clip from the three-point range this season.

In the Seminoles’ frontcourt, Okaro White and Terrance Shannon have combined to shoot 62 percent this year.